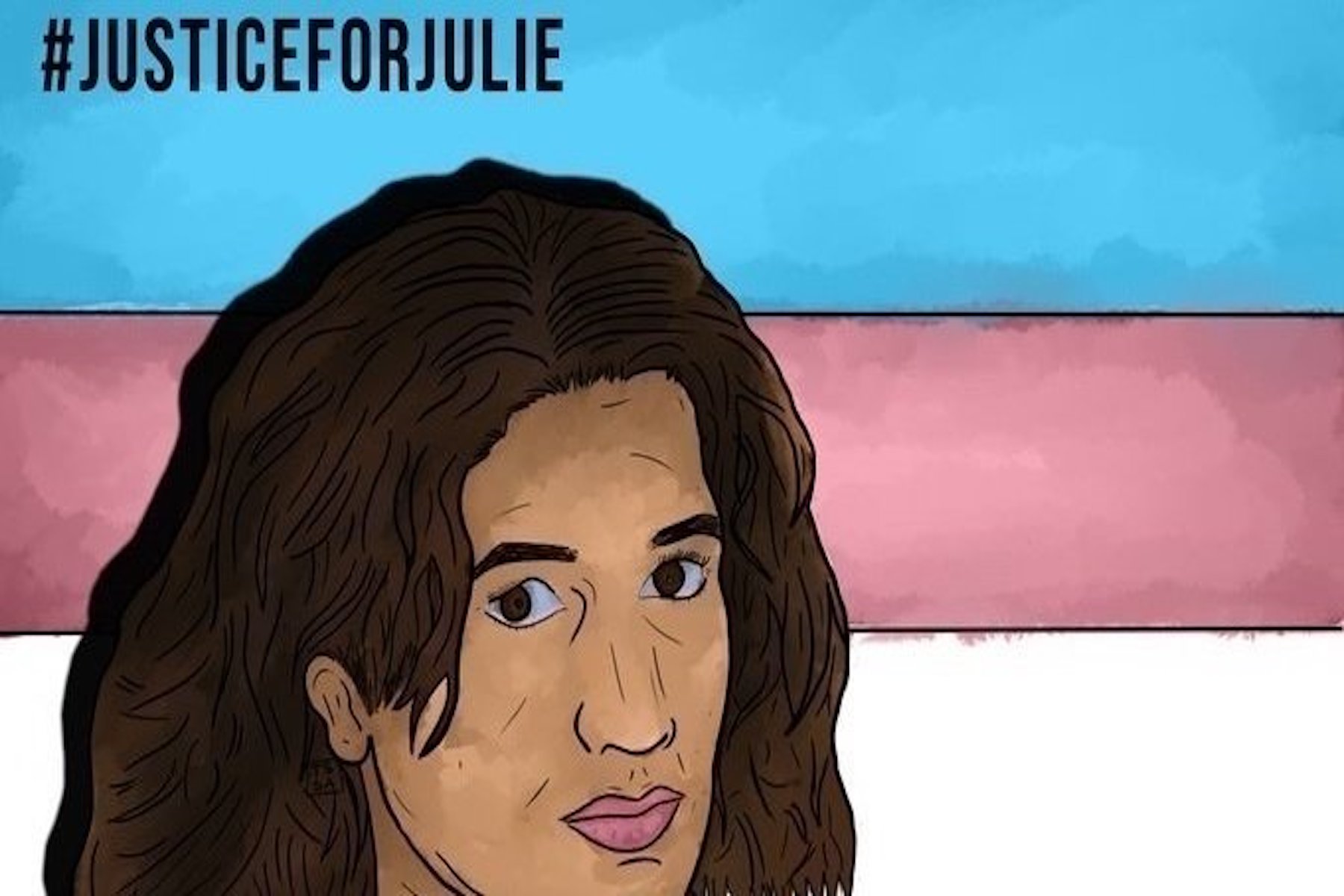 A prominent and outspoken transgender rights activist, Julie Khan, was arrested in Islamabad, Pakistan on August 10, 2020. Gender rights activists and the trans community are critical of Khan’s arrest, stating it was unlawful and based on false information. Khan is well-known on social media platforms across Pakistan. She has brought attention to challenges facing the trans community, specifically around trans rights, healthcare, rape and intra-community exploitation. She also hosts a mini-series on YouTube called “The Naked Truth,” in which she addresses the hypocrisies and issues in the Pakistani social and judicial systems towards the transgender community.

“I am here, I am standing and while I am alive I will fight for my rights and the rights of my community.” – Julie Khan

Khan’s origin story is not different from thousands of other trans-identified young people in Pakistan: being kicked out of their families, forced to fend for themselves on the streets, and turning to dance/performance or sex work to survive. What makes Khan’s story remarkable is that she has the resilience and courage to try and change the society she lives in. Through her activism, she has worked alongside different organizations to amplify the voice of trans people, such as Trans Action and Forum for Dignity Initiatives.

On the eve of Pakistani Independence Day, the unlawful arrest of a marginalized minority group member and the subsequent threat to her life made it hard for me to feel the spirit of celebration. More importantly, what does it really mean to be “free” as a nation while the most vulnerable of our population continues to live under oppression and fear?

She said,”I refused to accept that i was made to be raped,abused and ridiculed..I wont stop until my rapist is in jail”
But today she is in jail not her rapist and that too in cell with men..How can we claim to be an independent nation??#JusticeForJulie pic.twitter.com/pqeIVqLXKT

To understand this case, it is important to understand the context in which the transgender community exists in Pakistan, both internally between themselves and externally within the broader society. The majority of transgender youth are often asked to leave their families or forced to escape due to the potential of violence or even death. Once out on the streets and with no one to turn to, vulnerable young people are either recruited by other trans women or they find a trans community who then become their “chosen family.” Each area or locality has its own community, and these communities are helmed by a guru as a leader. Gurus are generally older trans women who are well-known in that broader community. A guru provides accommodations, protection, and a “family” to belong to. Gurus also train new community members on how to dress, dance, and perform. In return for all of this, gurus claim a percentage of their earnings and therefore hold major power over individuals.

Trans women often work in dangerous situations and are perpetually at risk for physical violence or death. Being disconnected from family and support, having limited income sources, and living on the margins of society leaves most trans women vulnerable. While many gurus are lifesavers, others can become bullies and exploitative.

In this case, Khan’s arrest was put into motion by a prominent guru with whom she was already embroiled in a legal conflict with over an assault incident and sex work racketeering. Khan’s lawyer, Hassaan Khan Niazi, stated that this arrest is an attempt to silence Khan, a voice that has asked for legal, safe, and equitable employment opportunities for trans people. This arrest is an example of how government systems, like the police force, work together with corrupt community leaders to exploit and take advantage of marginalized groups.

Pakistan’s judicial system has a complex relationship with religion, often weaponizing portions of it under the blanket “blasphemy” or “vulgarity” laws. Even though many trans people are at the receiving end of sexual violence, the judicial system has no space within it to call the crimes what they are. Pakistan’s penal code, mostly written during British colonial times, does not recognise the rape of trans people. So, trans women like Khan have to file any sexual violence cases under Section 377, which governs “unnatural offences.” Section 377 is the provision under which consensual same-sex relations are illegal. Furthermore, the legal system’s infrastructure doesn’t include separate holding cells and prisons for trans people, and usually sends trans women to male prisons where they are vulnerable to violence. Getting arrested as a trans woman in Pakistan and being sent to jail is akin to a death sentence itself. Currently, it is unclear whether Khan is in a male prison or is being held in a separate cell. Gender rights groups in Pakistan and Khan’s lawyer are applying pressure to ensure Khan’s safety.

Despite this, there have been some hopeful changes in Pakistan in the last 10 years. Up until recently, trans people were not able to apply for National Identity Cards (NICs) because of the gender binary, which prevented them from obtaining gainful employment, opening bank accounts, and voting. The landmark ruling of the Pakistan Supreme Court in 2012 changed that, allowing trans people to obtain NICs by creating a “third gender” option. Then, in 2018, Parliament passed the Transgender Persons (Protection of Rights) Act. Now, trans people have the right to be recognized on the basis of their own self-perceived gender identity. This Act affords the trans community basic rights and prohibits harassment and discrimination for employment and educational opportunities, housing, and healthcare services. This monumental protection, while still symbolic in many ways since the law is not always practiced, is a step in the right direction. There is still a long way to go, which is why every voice against oppression needs to be protected and amplified, including Julie Khan’s.

The lack of political, social, and judicial protection for the most marginalized groups of Pakistani society forces me to grapple with what it really means to be azaad (free) and to celebrate azaadi (freedom). I am not asking for a boycott of Independence Day or asking Pakistanis not to celebrate their joy. What I am asking for is humility in our celebrations. In his inaugural keynote address to Pakistan, Muhammed Ali Jinnah said:

“You may belong to any religion or caste or creed – that has nothing to do with the business of the State.”

The foundations of the country are built upon the desire for equality and protection for all — something the collective consciousness of Pakistan has forgotten. So, instead of loud chants of freedom, we should seek out the poor, the weak, the marginalized, and raise them up. We should look for ways to provide the azaadi, benefits that we are proud to have, to those who have yet to live them. I urge that we pause and ask ourselves: whose azaadi are we celebrating?  If it is only our own, then it is untrue and incomplete.

Khan was set to be released on bail on Sunday; however, it has been delayed. An Instagram account has been created to organize a protest in support and solidarity for Khan. You can search for the most updated news on the case and the conversation about trans rights in Pakistan on Twitter and Instagram using the hashtags #FreeJulie and #JusticeforJulie. The criminal case in this article is a developing story.

The opinions expressed by the writer of this piece, and those providing comments thereon (collectively, the “Writers”), are theirs alone and do not necessarily reflect the opinions of Brown Girl Magazine, Inc., or any of its employees, directors, officers, affiliates, or assigns (collectively, “BGM”). BGM is not responsible for the accuracy of any of the information supplied by the Writers. It is not the intention of Brown Girl Magazine to malign any religion, ethnic group, club, organization, company, or individual. If you have a complaint about this content, please email us at [email protected]. This post is subject to our Terms of Use and Privacy Policy.

You Cannot Designate Yourself an Ally by Wearing a Safety Pin

#DoDeshEkJaan: Dear Mom and Dad, We Love our Neighbors and so Should You

An Open Letter to Priyanka Chopra on Why Black Lives Matter