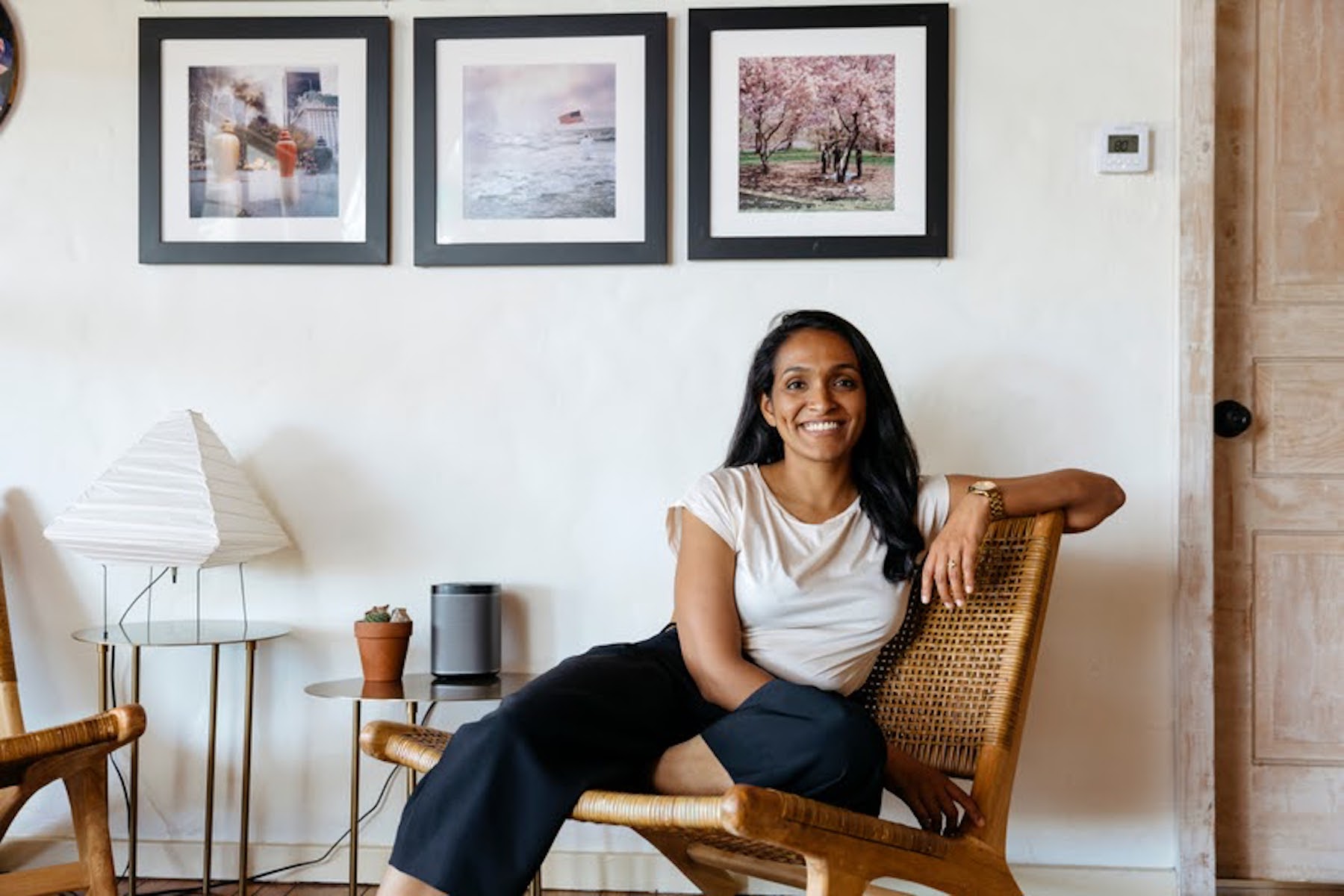 Photos courtesy of the Nithya for the City campaign.

It is not often that young desi women get to say they can see themselves as politicians in the United States. When I first saw that Nithya Raman, a desi woman like myself, was running for a spot on the most powerful city council in the country, Los Angeles (LA) City Council— where each council member represents about 265,000 people— I felt energized. Within 30 minutes of delving into her policy platforms, I cold-emailed her team to volunteer on the campaign.

Raman’s platform extends from fixing the LA housing crisis and improving accessibility for senior citizens to creating a municipal ID program for immigrants and switching LA to 100 percent clean renewable energy. While my values align with Raman’s policies on immigration, the environment, racial equity and her dedication to repairing the vibrancy of LA, my affinity towards Raman as a candidate is much deeper than that. 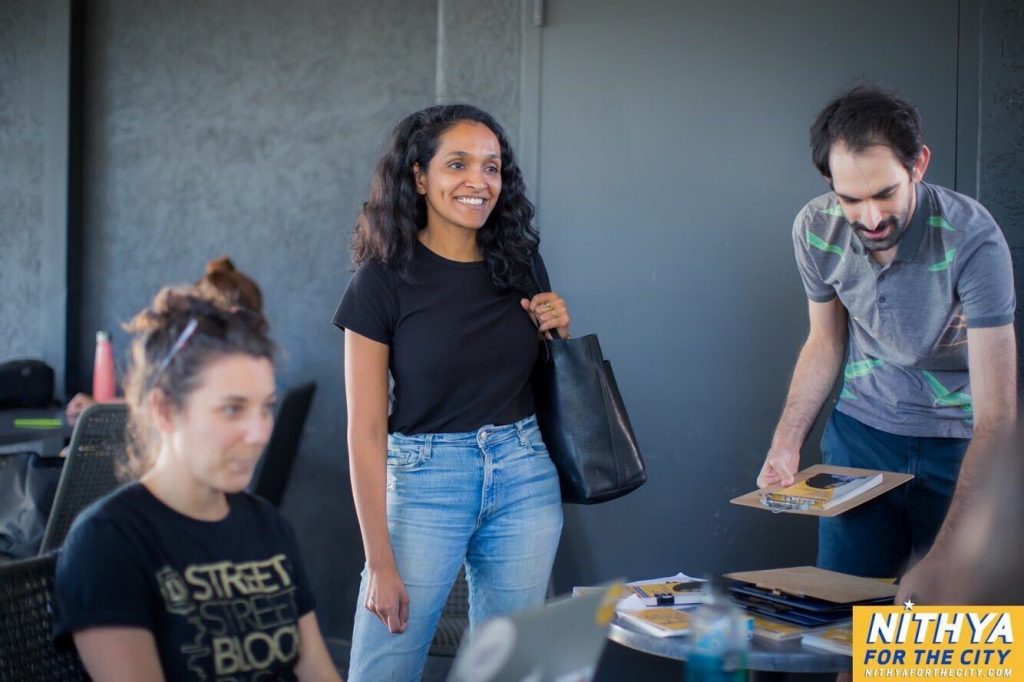 Originally from Kerala, Raman immigrated to the U.S. and grew up on the outskirts of Boston, speaking Tamil at home. Her current quarantine food craving extends to anything Indian street food, like golgappa, aloo tikki, pav bhaji, chole bhature and everything on the menu at Swati Snacks. These are familiar attributes inherent to my culture of growing up with a hyphenated identity. They may seem minuscule to her campaign at large, but they matter to desi girls like me.

I see myself in Raman and I know many South Asian-Americans can, too.

The desi diaspora certainly can understand the hardships of breaking cultural barriers. Just like many of us, Raman had to experience this in the pursuit of a career in public service.

“Growing up, the [South Asian] culture often emphasized financial success and pedigree and this limited the type of work that people did. When I went to India to work with organizations that had no national or international presence, I was fighting against what I had been taught by doing that work, yet it was so essential to shaping my understanding of what needed to change policy-wise,” Raman said.

Despite challenging cultural norms, Raman’s career in advocacy and public service is inherently interwoven with her cultural roots. After graduating from Harvard University with a degree in political theory, she spent nearly a decade in Delhi, working with a network of organizations focusing on developing impoverished and underdeveloped communities and finding solutions to urban poverty, including Sajha Manch in Delhi and the Pennurimai Iyakkam and the Unorganized Workers’ Federation in Chennai. She returned to the United States to receive her master’s degree in urban planning at the Massachusetts Institute of Technology (MIT).

“The issue was that there was a whole invisible city of lower income residents and a group of people who appeared on no maps and for whom access to services was not a right.”

To rectify this, Raman started Transparent Chennai, an organization that worked with residents of slums to create data that strengthened their advocacy for resources like running water and basic sanitation. The urban poverty planning Raman did in India impacts how she grapples with societal issues in Los Angeles and laid the foundation for her advocacy work on homelessness.

“[In India], I was able to work alongside grassroots organizations and support existing social movements, so I had a very different perspective on the type of policy changes that were needed,” she stated. 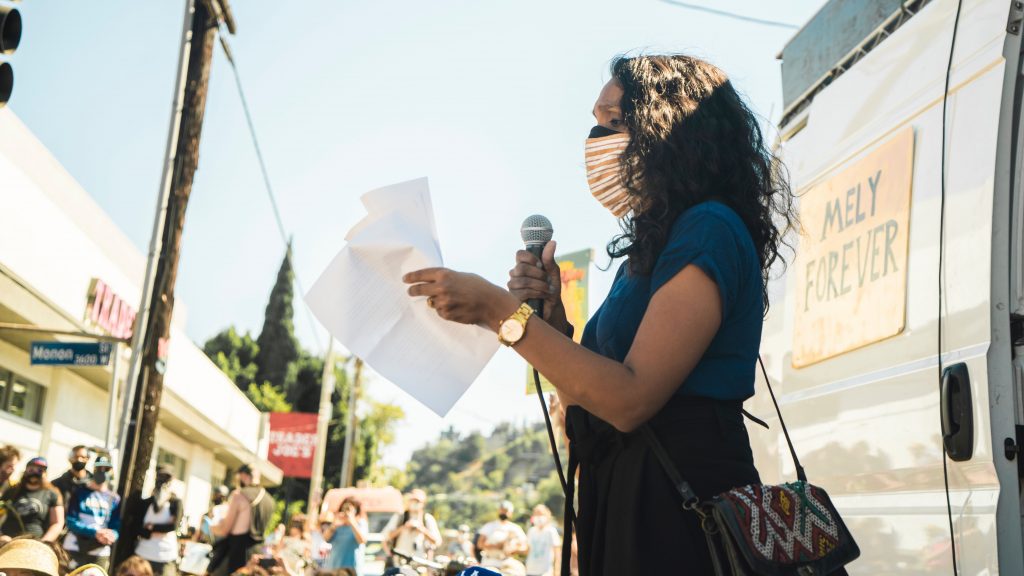 Even with her degrees and professional experience, Raman still encounters imposter syndrome from time to time; a familiar concept for so many women of color. Dealing with a lot of external anti-South Asian rhetoric and racism growing up affected Raman’s self-image.

“It made me feel less sure of myself as a leader and as someone who had a legitimate voice. It is something I had to struggle with while running for office, and I still face some of those insecurities and fears. I am constantly learning how to step into myself and my own sense of who I am,” Raman said.

It’s refreshing, and frankly reassuring, to relate to a candidate as qualified as Raman, who is still actively growing into her leadership role.

Raman served as the Executive Director of Times Up Entertainment, where she saw her leadership style and potential evolve.

“It was a moment when I felt like some of my insecurities about the power of my voice began to rest because I was invited to be at the table in that way and invited to take on a leadership role in a movement that still has a lot of work to do but made a big global change in how we talk and think about safety from sexual harassment and assault,” Raman said.

When we see familiar people with familiar experiences in positions of power, we start to see ourselves become comfortable with the concept that we too have a right to those powerful positions. It no longer becomes unnatural for us to have the audacity to lead the conversation.

In LA City Hall, there are 15 councilmembers and 18 total elected representatives, only two of which are women.

“That’s today. That’s 2020. Those numbers are really dark. It is incredibly important for not only Desis but also women to step up. We don’t have the type of representation we need right now,” Raman said. 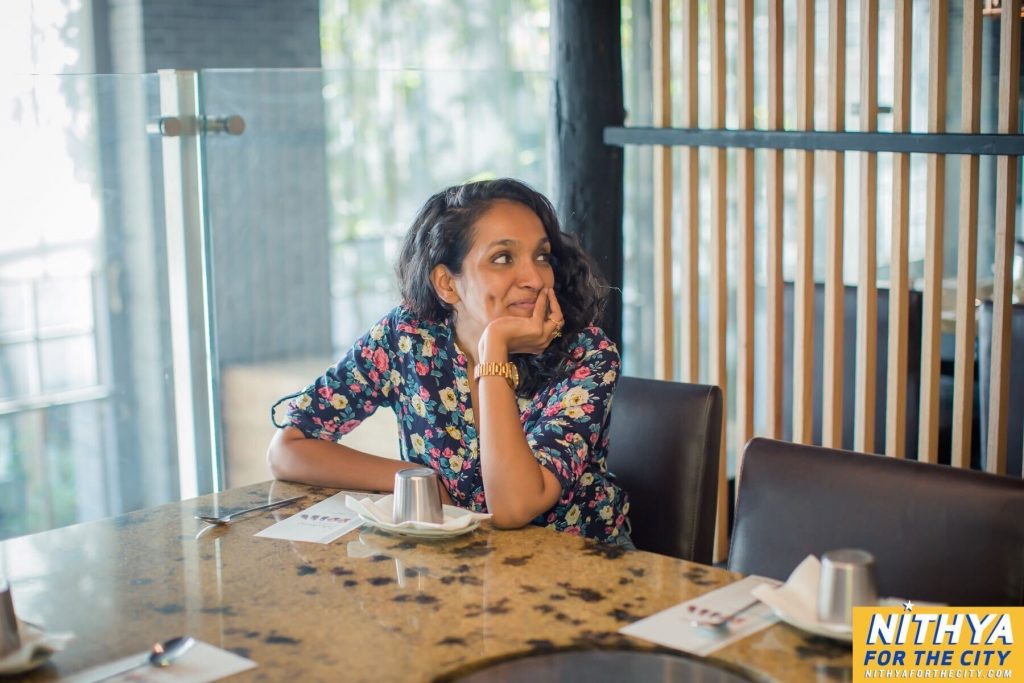 We may not have the representation we need right now, but I am optimistic about the future. Desi women like Raman pave the way for desi girls like me. Seeing her strive to occupy spaces of power makes me hopeful for a future where one day if I run for office, women of color in leadership spaces are the norm. The idea that someone who looks like me, relates to me may get the chance to represent me— alongside 264,999 other Angelenos— is an overwhelmingly empowering feeling that energizes me to continue to demand that microphone at the tables. That’s the power of representation.

Kavita Rai is a passionate youth activist and journalist centered around creation and thinking out-of-the-box. She is a storyteller and public speaker at heart and uses journalism as a platform for her activism, writing about global and national politics as well as her South Asian identity. She served on Girl Up Campaign’s international youth consultant board advising the organization on communication and advocacy strategies. Building off of her activism, she lobbied on Capitol Hill with the ACLU and Girl Up for bills ranging from immigration reform to protecting girls abroad. She has been invited to speak on behalf of organizations including Los Angeles City Hall for the 70th Anniversary of the Universal Declaration of Human Rights day and Girl Up for the Annual Global Leadership Summit in Washington D.C. She’s excited to continue her education and advocacy work as a student at University of Southern California.

Rina Patel: Brown Girl of the Month and Founder of Aahana, NPO in Gujarat