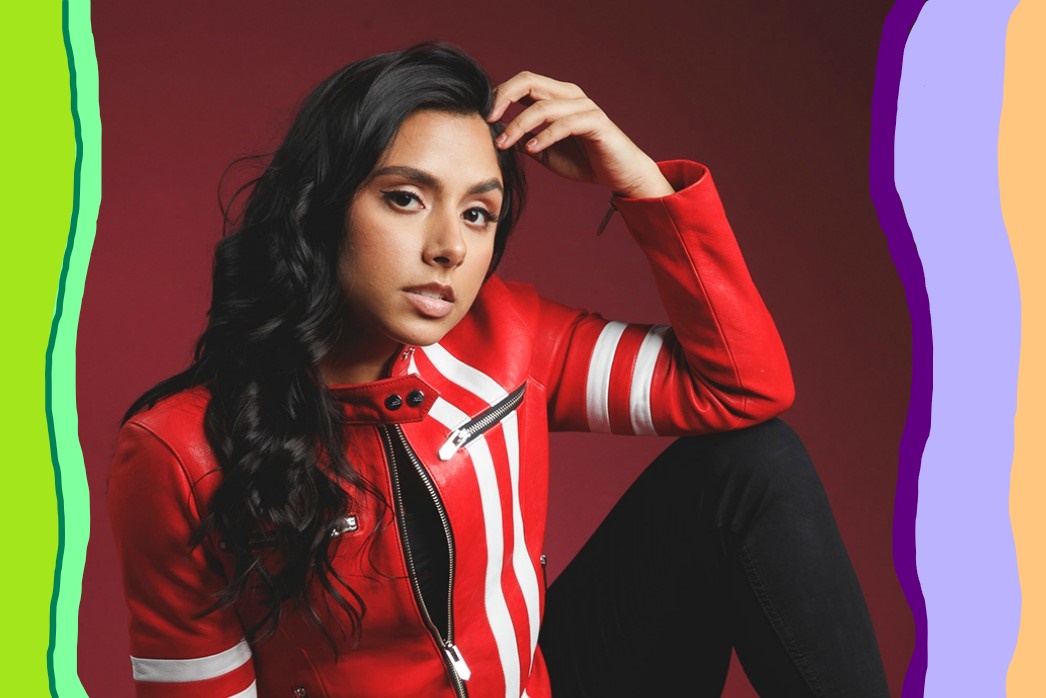 This interview was edited and condensed for clarity.

Patience, responsibility, and giving describe Youtuber Michelle Khare’s HBO Max series Karma released in June 2020. The show depicts sixteen contestants between the ages of 12 and 15 who compete off the grid in physical challenges but with karma laws setting the rules.

Khare has amassed nearly 300,000 followers on Instagram and 2.17 million subscribers on YouTube. Her content ranges from behind-the-scenes training like Black Widow to encouraging extreme body makeovers. It’s this hub of lively videos and her sense of adventure that has earned Khare a spot as a TV host for Karma.

Though Khare was not involved in the selection process as a host, she says representation is something that matters to her as a biracial Indian-American woman. Her white mother and Indian-American father influence her passion for inclusivity. She applauds Karma for showcasing a diverse cast, scripted and unscripted. It wasn’t an attempt to check off diversity boxes; instead, it was about telling a variety of amazing stories, Khare remarks.

We asked Khare more about her experience and journey hosting the show.

VISWAMITRA: Every single child on the show was different from each other. Can you talk more about this factor?

KHARE: The kids came from so many different backgrounds, including differences in financial stability and family life. It reflected what each kid stood for.

I felt that the show was less drama about pedantic things that you see on reality shows and was more of ‘We don’t understand each other because we are from different places and we need to resolve it.’ Watching this show and just witnessing these experiences teaches adults something about having conversations.

This Re-Edit is ?? OMG!! Who’s watched #KarmaHBOMax?? Guys I have been so floored by your reactions and finally getting to share this beast of a project with YOU! Your support is EVERYTHING! I love you so much!! My behind-the-scenes Challenge Accepted episode is coming soon… and will show you a completely new side to this adventure. ? for now, I love you love you love you! Keep streaming and sharing your reactions with meee! ?

V: People say that you shouldn’t meet your heroes, but what was it like to host a show that JD Roth created?

K: JD is an amazing person. Not only was he somebody that I looked up to throughout my hosting career, but he also had an impact on me when I was a child. I went to the audition shaking in my boots saying, ‘I am sorry if this is unprofessional, but I am such a big fan!’

He also became a mentor for me and helped me truly understand what it meant to be a host. It’s not like acting, which you can take classes for or attend school. Instead, it’s unique and people assume that ‘you’re just being yourself’. I am grateful to him for not only executive producing the show but for watching me and guiding me along the way. I brought a lot of what I had learned back to my channel.

V: In the behind-the-scenes video, you mentioned that there was a point where you realized that you had to stop just reading off the cards and infuse your personality into it. What triggered this change?

K: When we were filming, something that was unique to me was reading a copy of a cue card that is very dense. On my channel, there are portions where I prepare what I’m going to say, but they are my words. On a show like Karma, the host is important because they have to deliver complicated bits of instruction. When the kids walk up to a contraption, I have to explain the rules and how it works, and some writers did an amazing job of making it funny, concise, and easy to understand.

But at the end of the day, it still wasn’t something that I, Michelle, would have said. It came to a point where I was so laser-focused on the cards – ‘am I saying the right words’ – that I would lose a bit of my personality. Or I would try to be more myself and end up tripping over my words. There were even times when I would keep saying the same mistake repeatedly; thank god the editing room was very kind. On the show, I’m not playing a character; I am myself. So I thought that it was important to include myself—the producers and the writers were very receptive to that.

Caption this INSANE moment from #Karma on @hbomax ? I will never forget this moment for the rest of my life oh my godddddd!! P.S. Going live with Yellow and Gray teams tonight at 5PM PT! Come join us to unpack the drama and hear more about our experience behind the scenes!!

V: You’re a brown girl who hosted a network TV show. What was this like for you?

K: I realized the difference it made on every level to have this type of representation and how important it was to do the best job possible. I feel an immense amount of pride being the first South Asian woman hosting an adventure show. And it didn’t hit me until the head of the wardrobe called me and said ‘Hey, what do you want to wear on the show, because every other host wears khaki shorts and a button-up because they’re white guys!’

It’s a huge weight on my shoulders, and I don’t take anything lightly. I do it with 104 percent, whether I am the first or the last person to do it. I wanted people to see that I worked my ass off, and that had nothing to do with the color of my skin or the reproductive organs I have. It’s because I, Michelle, will get the job done. If I don’t, I’ll admit it! I’ll say ‘that wasn’t a good take, let me do it again.’ I wanted people to see me as a hard worker regardless of anything else and for the audience to see a little bit of themselves in it.

Karma can be streamed here.

Aishwarya is a science journalist completing her masters in Biology in Punjab. She hopes to bridge the gap between citizen and science through various forms of scientific communication including podcasts. She performs spoken word poetry, makes stop motion films and teaches English in her spare time. Having lived in Bangalore and grown up in Arkansas, cultural shocks have become the thread that connects her non-scientific writing while she learns to navigate India, traffic and all.

Kalki Koechlin’s ‘Margarita, With a Straw’ is a Must-See New-Age Bollywood Film

Sex, Gays and Suicide: Why Taboo Topics Are the Downfall of South Asians