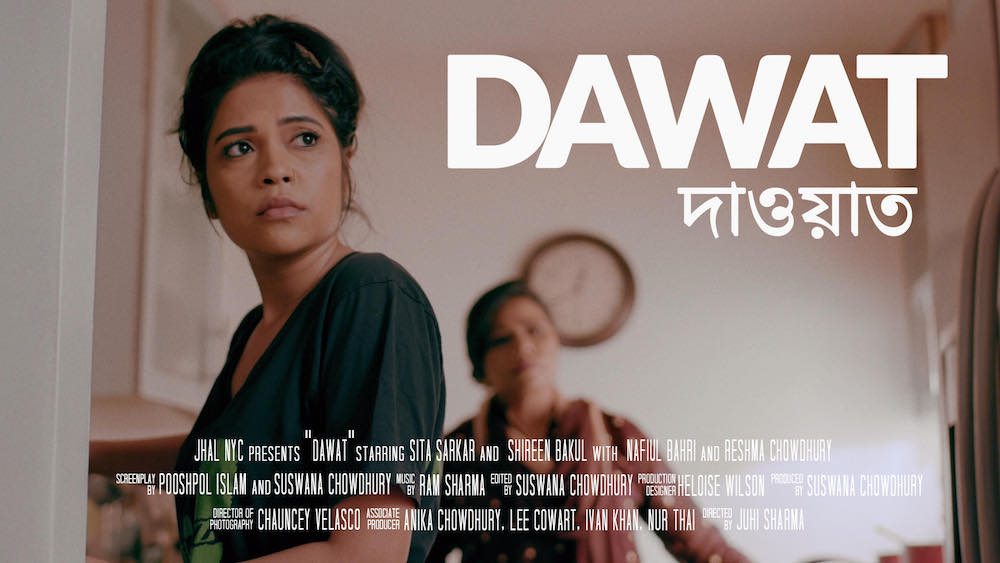 Anyone who knows me knows I love movies. Whether it was watching in awe as Spiderman swung between buildings or sitting on the verge of tears by the end of “Kabhi Khushi Kabhi Gham,” movies were always my favorite form of escape. But when you’re a minority, the spectacle of cinema also comes with the desire for representation. If there’s anything I wish I saw more of as a kid, it was people who looked like me on screen. According to the 2018 “Hollywood Diversity” report published by UCLA, only 3.1 percent of leading Hollywood roles went to actors of Asian descent.

Almost every desi actor, both industry-established and up-and-coming, have spoken at length about offensives roles they’ve been offered. Recently, even the lead actor of Disney’s Aladdin Mena Massoud admitted to not getting a single audition after the movie’s release. So when fellow Brown Girl Suswana Chowdhury produced a short film with Jhal NYC meant to capture a common South Asian American struggle, I knew I had to go.

Meet the Team: I was sitting in the basement of the apartment complex across the street from me in Jamaica, Queens listening to a discussion about literature with some Bengali journalists and poet, Shaheed Quaderi. They were referencing writers across the globe when it struck me that I was in the presence of an award winning poet whose works remain largely unknown to the West, and what a true loss to everyone for not knowing. And thus began my obsession with not just increasing the representation of South-Asian Americans as a whole but to bring Bengali culture and creative works to the forefront.? ? Dawat is a reflection of my childhood, an ode to our language, a tribute to being Bengali-American. Within the same breath you can feel both the beauty and the frustrations that lies in our heritage. You understand how far our parents have come for us and how much further we need to travel together. Listening to the words from our script come to life at our first table reading brought tears to my eyes, to finally hear and see myself was overwhelmingly gratifying. Thank you Maa for showing me my roots, this one is for us.? ? ~ Suswana Chowdhury, Producer? _____________________________________________________? We’ve got only a few weeks left in our Indiegogo campaign. Please help us tell this story and bring Bengali culture to the forefront. Any and all contribution amounts will go a long way. Donation link in bio.?

Held at 7 Line Studio in Long Island City, N.Y. on Nov. 3, the event was a celebration of the Bengali-American experience and the power of representation. It began with a keynote by world-renowned Bangladeshi photojournalist Shahidul Alam. Alam went through anecdotes of leaving Bangladesh and later returning, the oppression of its citizens, and his time and torture at Dhaka Central Jail. His stories were stark, but Alam was in good spirits the entire time.

One particular anecdote stood out. Alam had a friend out in the U.K. and he was a favorite of his friend’s younger daughter. During one visit, a handful of coins fell out of Alam’s pocket, to which the daughter responded in shock that Alam was capable of having money at all. It was a vital lesson in how stories inform perception. This young girl had only ever seen images of Bangladesh as a poor, underdeveloped country. She didn’t know any better. The lesson was clear: If you want the world to know your authentic story, you must tell it yourself.

It was fitting then to watch “Dawat” itself. The film, made by a mostly Bengali cast and crew, followed Ishita, a Benagli-American graduate who dreamed of going to UCLA to pursue film production. But Ishita’s mother wanted her daughter to follow a more traditional path and get an MBA instead, and during a social get-together with friends and family, things come to a head.

This is a struggle almost every South Asian creative has faced. If we pursue a non-traditional career, will we still have the support and blessings of our families? “Dawat” is certainly not the first movie to address this, and it won’t be the last. And although the landscape is getting better, with movies like “Late Night,” “Stuber,” “Yesterday,” and “Blinded by the Light” coming out just this year, the fact that South Asian Americans still feel the need to depict this particular story is telling. The worry of “What will people say” is still pervasive.

If “Dawat” was a small glimpse into the anxieties of wanting to be a South Asian creative, the panel that followed was filled with strategies to combat it. Led by Bengali-American filmmaker Shomi Patwary, it featured the movie’s lead actress Sita Sarkar, writer and novelist Sharbari Ahmed, and writer and director Nashwa Zaman. Ahmed emphasized the importance of having your voice heard behind the scenes, such as in writer’s rooms. She reminded us that it’s those voices that ultimately decide what representation in front of the camera looks like. Zaman spoke about our conditioning to pursue perfection because of the worry of what people will say. “I hate that word, perfect,’” she said, “but South Asians are obsessed with it. Pursuing such an impossible goal will only hold us back.”

Sita spoke about the courage it took to take the initial leap towards pursuing creative entrepreneurship. She recounted how nervous she was telling her own parents that she wanted to be an actor, afraid that they’d be disappointed. But she made an important observation. “Our parents don’t want to see us fail,” she said. “They immigrated to this country and supported our growth. They just don’t want to see us financially struggle. That’s where this all comes from.” The presence of her mother and grandmother in the audience affirmed her statements. Her answer to whether creatives will still have the support of their families? A definitive yes.

[RELATED: Want to Become a Slashie? Dive in, But be Kind to Yourself]

Sita’s remarks about taking the leap stayed with me as the event came to a close. As folks began to pack up and say their goodbyes to their friends and family, I took a minute to actually look around the room. As expected, there were several other creatives who were around my age and among various stages of their slashie careers. But I was surprised to realize there were just as many aunties and uncles mingling about too. We were all here for the same reason—to show our support for this film and see our story represented on screen. I wasn’t used to that. It gave me a sense of affirmation that even as our generations fight for better representation on screen, we’re not alone doing it.

Viren Shinde is a programmer by day, a photographer and writer by night, and a consumer of all things caffeine 24/7. He loves to tell stories and dislikes it heavily when people leave the volume knob on an odd number. Viren strives to create content that captures snippets of the brown identity and unpacks the personal biases of the South Asian diaspora. In his spare time, Viren loves to watch movies, play board games, and try and find the best happy hour deal for tacos on the block. You can follow his photography journey on his Instagram @virenshinde_

I Don’t Need God, I Need a Therapist

‘Masaba Masaba’ Review: How Do You (And Can You) Master Social Media?

Why We Love Mindy