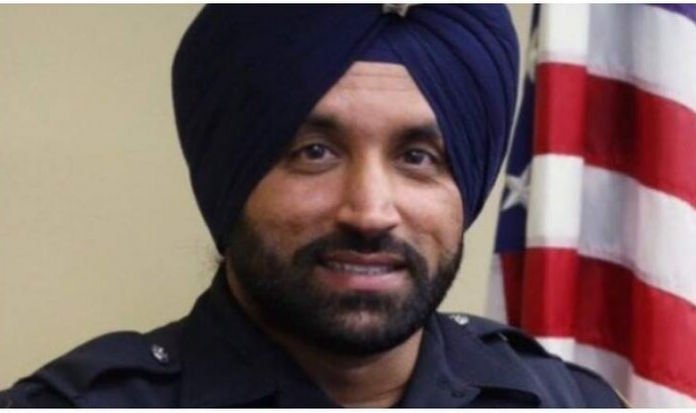 Thousands came together for daylong ceremonies Wednesday to honor “humble” and “fearless” Harris County Sheriff’s Deputy Sandeep Dhaliwal, who was shot to death during a traffic stop last week.

A community vigil was one week ago Monday, followed by Deputy Dhaliwal’s memorial service Wednesday, Oct 2.

Sheriff Ed Gonzalez said Deputy Sandeep Dhaliwal “was unable to recover from his injuries” after he was shot in the back of the head during a traffic stop in northwest Harris County, Texas. He is survived by his loving family, including his wife and three children.

Deputy Dhaliwal, 42, was the first Sikh to serve in the Harris County Sheriff’s Office (HCSO) while maintaining his articles of faith, including his turban and unshorn hair. At the time he received religious accommodation to do so, HCSO was the largest sheriff’s office in the nation to have a Sikh American serving with those articles of faith.

Lieutenant Dhaliwal was widely regarded as a role model for young Sikh Americans and other religious minorities wishing to serve their communities in law enforcement, and his passing is deeply felt in the Houston community and across the nation.

To Protect And Serve (2019) • ?Rest in Paradise? #SandeepDhaliwal (@deputy_dhaliwal – the young officer made headlines after gaining a religious exemption to wear a turban as part of his police uniform, was also left with tragic headlines having been shot and killed on Friday near Houston in what officials described as an ambush during a traffic stop. • I’ve seen a few videos and pictures circulating around on Sandeep and his relationship with the various people of Houston and it absolutely breaks me to have read about this over the weekend. Here’s to hoping this piece reaches his family as a minimal way to ease the pain and celebrate the young man. • ??????

Officials identified 47-year-old Robert Solis as one of the suspects and arrested him on Sept 27. Solis was charged with capital murder the following day. A second suspect was also arrested but has not been publicly identified.

Authorities have given no indication that the killing was a hate crime. Solis was wanted for 2017 parole violations for assault and possession of a prohibited weapon. He was likely to be sent back to jail, where he served 12 years of a 20-year sentence for two felonies he was convicted of in 2002 after he shot a man, the Chronicle reported.

To further his legacy of selfless service, the Sikh Coalition has assisted 98 Sikh current and former law enforcement and military personnel with two letters urging reform to religious accommodation policies in their respective institutions.

The press statement can be found here, with the letters here and here. Additionally, U.S. Army Captain Simratpal Singh has written on the need to change accommodation policies to honor Deputy Dhaliwal’s legacy here.