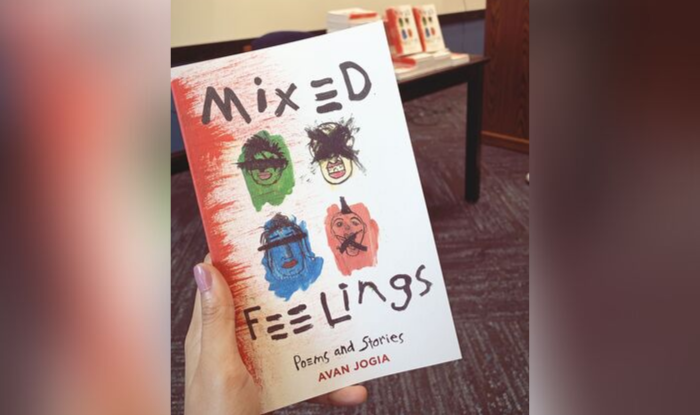 Avan Jogia, widely known for his roles on Nickelodeon’s, “Victorious”, the Freeform series, “Twisted,” and Starz’s “Now Apocalypse,” reveals yet another side to his creativity with his recently released book, “Mixed Feelings.”

“Mixed Feelings” is a set of poems and a mixture of stories of individuals who are not “half of anything, [but are] full being[s].” Each page is a snippet of life from the point of view of a “mixed person.” Every line has a motive to not divide us, but see the world from a “zoomed out” perspective. When we do so, we understand how the labels, like race, gender, and sexuality, do not really matter.

I had the opportunity to sit down and talk with Jogia at a book signing event at the Penn Bookstore, and found out what the actor, activist, and writer had to say about his new venture.

How/When did you get involved in writing?

Well, I have been writing my whole life. I got into poetry probably when I was like 13. I was really into Lord Byron and Edgar Allan Poe… and like the kinda ‘dandy’ poets,” he laughed. “Poetry specifically is a really easy way to communicate because it feels direct and it comes from you. Unlike other mediums, there is nobody else involved…well there are editors, but you kind of manage the entirety of the work. And, these are your words and not a creation by a committee.

I actually pitched this poetry book like 2 years ago and everyone actually said that no one is buying poetry, so good luck. But, then Rupi Kaur happened and… well Rupi and I are kinda friends via the internet, and all of a sudden people were getting back to me about the set of poems from 2 years ago…cause poetry is a thing now! It’s what Rupi did.

What inspired you to write “Mixed Feelings”?

I am mixed race, so it comes from a lifetime of being me. And, also the rise of the conversation of race in America and how that sort of made everyone figure out who they are racially, and discover more about themselves. As a mixed person, um, I am unclassified in all the different groups. I am definitely a person of color, because I am brown, and I walk around as a brown person but as a mixed person, you inhabit different spaces. Negative or positive, there is no such a thing, but you kinda just are an ‘other’. You kinda just check the ‘other’ box. So, that’s sorta where it all started.

Is it only about race/ethnicity, or it can mean different identities, such as ‘American Muslim’, as well?

Well, that’s what I came to notice as well. When I started, I tried to think about what it is to me, in a sort of myopic perception. And then, what I realize is that you zoom out, zoom out, and zoom out, and you see that there are different types of ways of being mixed: you have race, gender, sexual orientation, class, religion, politics… unfortunately, in this society, there are millions of ways to be fragmented and broken into different pieces of the identity spectrum. And so, as I realized that, I included stories of people who had very different experiences of what being mixed was like.

So, when you thought about including the voices of other individuals, how did you go about choosing the people you interviewed?

Social media can be very useful…at times! One good thing about social media is that you can reach out to people who are like you! I mentioned to the public to reach out to me if they feel mixed in any capacity..and I will read and if it fits, I’ll answer back. It was so cool, and so exciting. So, that’s where I started interviewing and refining that and putting it in the stories

The title is “Mixed Feelings,” So, do you view “being mixed” as a blessing in disguise?

I think it’s very hard to rate your life’s experiences…I think it’s a double meaning for sure. My feelings are mixed on the subject and the feelings of being mixed. I would say it is definitely isolating, it’s a lot of juggling identities…as we all are. That’s what being a person is. I think that’s what this book ends up being about, which is, you have all these labels, but what you are, sits behind all that. Right? They are all labels, if you hate them and they do not define you, get rid of them!! It’s empowering to be ‘this’ thing until it’s not. Ultimately, your soul is who you are. Cause, four generations ago, some of us were completely different races. Depending on our bloodline, we have been all types of people. I for myself, I am Gujurati, but my family was Sikh a little bit ago. So [laughs] it doesn’t really matter!

Brown Girl Magazine loves to feature stories about being yourself and being comfortable in your own skin! What’s your number 1 advice to those who are struggling to live the ‘best of both worlds’ (that is, being American and Asian/another ethnicity)?

You can drop your labels. It doesn’t really matter. I mean it’s important, for obvious reasons. Because you can’t control the way people see you, but you can control how you see yourself. And, people like to attribute stereotypes, usually negative, to different groups…and that’s a lot to process. You will find yourself saying, oh I might be this thing, but I am also this thing. And, that’s very constraining. I am a brown girl, but I am not like that kind of brown girl, or whatever the label may be.

What’s next for Avan Jogia?

Well, ‘Zombieland Double Tap’ is also coming to theaters soon. And, also my brother, Kave, and I have music out @Saint Ivory. More writing for sure.

Maybe, definitely, if I find another angle. We will see. This is why I love being on tour, meeting different people physically, hearing their stories. There are definitely more books in my future. I find it really relaxing.

[Read Related: Brown Girls Finally Get the Fantasy Heroine They Deserve with ‘Aru Shah and the End of Time’]

Well, there you have it. Make sure to grab your copy of “Mixed Feelings,” because there is nothing more authentic and raw than the experiences of such individuals themselves. Avan Jogia does us a favor by acknowledging the circumstances society puts us in and showing us how crucial it is to move away from labeling ourselves.

Shezda Afrin is an aspiring physician from Philadelphia, Pennsylvania. Enthusiastic about Public Health, she is heavily involved in non-profits and hopes to leave a positive impact on the children she supports. At the age of four, it was quite normal of her to wear the same outfits and accessories as actresses (such as Preity Zinta) and lip sync the songs like “Bumbro” word for word. Aside from traveling with her family, learning new languages, and witnessing different cultures, she has a passion for event planning. You will probably find her spending her Friday nights binging on Bollywood movies with a plate of mini samosas in hand. Having an innate interest in the topics featured and discussed, she hopes to actively engage in the Brown Girl community.

4 Ways to Pass on Cultural Traditions to Children: Tips for Parents

Juhi Chawla Makes It To Hollywood

Say My Name, Say My Name (Or At Least Try, Dammit)