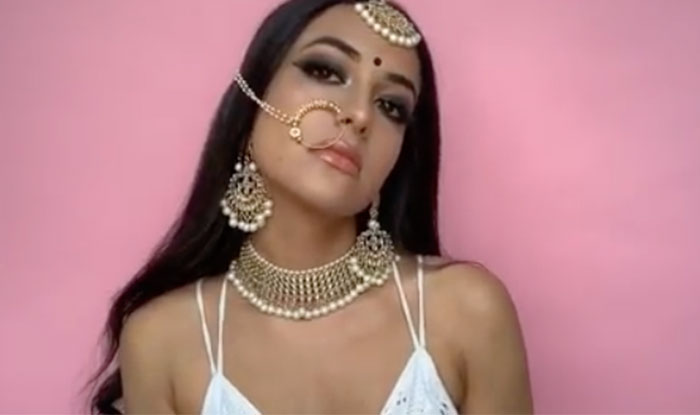 Oh, how we all love a good smokey eye. The best thing about a smokey eye is that it is absolutely timeless and classic. Just like some of your go-to outfits make you feel sexy, a smokey eye can help you feel the same way—without fail!

So, in light of all the weddings that I’ll be attending this wedding season, I wanted to start off on the right note and show you, ladies, how you can create your own sultry eye makeup look with minimal effort and with so much ease. Any time there’s a desi wedding to attend and you just can’t decide what to do with your lids and lashes, think smokey eyes!

If you’re looking for eyes as dark as my jadoo (lol!), then you have to tune into the quick tutorial below! But, before we get started, let me run you through all the products I’ve used to bring this classic look to life.

What’s on my face?

What’s on my eyes?

What’s on my lips:

And now for the big reveal! Grab your brushes and palettes because we’re going to run you through how to get your own sexy smokey eye that’s perfect for any occasion, including all those desi weddings that are coming up!

Seerat is a Sikh Punjabi tech nerd making waves in San Francisco with her passion for fashion, beauty, and intersectional feminism. You can find her either covered in swatches at your local Sephora, hunting for a new rooftop lounge, or chilling in her sweatpants with no makeup on. She's been bitten by the travel bug and also frequently haunts SoHo, but calls the City of Angels home where she probably knows Preeti who went to high school with you. She earned her Bachelors in Business from the University of Southern California.

The 5 Shoe Trends You’ll Want to Wear This Season

Finding the Beauty in Your Live-In Relationship