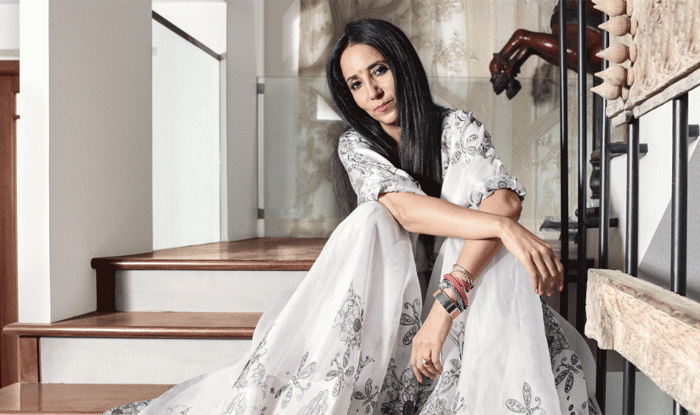 A dhoti saree…with capes. What a genius combination. And, what’s more amazing is the fact that it’s a trending fashion. All thanks to Anamika Khanna, one of India’s creative geniuses in the fashion industry, who aims to make Indian clothes relevant, modern and international.

Grab your cuppa chai and read on to get the inside scoop on our exclusive conversation with Khanna.

#DesignerOfTheYear #VogueWomenOfTheYear @vogueindia “There is enough noise in the world; my clothes don’t need to add to it. My clothes are for people who are okay to follow the slightly unbeaten path and yet find their own space.” Anamika Khanna.

Many may not know how Khanna landed a successful career in the fashion biz. Well, the answer is surprisingly simple and she makes a candid admission:

My career came to me by chance.

Boy, are we ever glad it did! She remembers being in college and liking to get creative:

I sketched enough, but it was just as a hobby.

This hobby quickly turned into a dream career when, one day, she sent her sketches to a design contest and was called to present her collection. Winning the contest, she started her journey to spice up Indian fashion.

She tells us a little about her first venture:

My first venture was a collection that I created for a store called Ffolio in Bangalore. I sold out in an hour and what was exciting was that this collection was a complete experiment.

Although this opportunity was a seamless segue into a full-time career as a fashion designer, Khanna says that having a career in fashion is indeed very challenging.

You are constantly innovating, marketing, financing and being judged for everything… So, you have to be on top of the game.

But, it’s obvious that all the pros outweigh the cons of being in this profession because for Khanna, fashion is a way of life.

My favorite part of being a fashion designer is the fact that I am able to dream and give it form. There’s also the fact that there is no dull moment in life anymore. It is not about wearing trendy clothes, or blindly following what the rest do.

She relates fashion to science by saying that fashion is a way to evolve. When you find your own sense of style, you tend to adapt to what is and isn’t trending, and then making sure you suit it to your own personality in some way. The ace designer strongly believes that it is important to let fashion be a way to see your personality. And, when it comes to her designs, she seeks inspiration from almost anything and everything.

So, what’s her mantra to success?

I try to stay relevant to the times, moods and people, understand their psyche, stay in touch with the millennials and accept, adapt, change and evolve.

Sonam says “I do” with Anamika Khanna. As featured in @bridestodayin #anamikakhanna #sonamkapoor

Khanna lets fashion be her voice in all walks of life. She continuously donates to causes that help people diagnosed with cancer and brings awareness to malnutrition, hunger, and illiteracy in India as well. She works with Akshaya Patra, an NGO that runs one of the greatest school lunch programs in an effort to end child classroom hunger. Speaking more on the cause, Hall-of-Famer says:

Akshaya Patra is close to my heart and for every garment we create, we donate to feed a child for a month. We are constantly looking for associations where, in some way or the other, we can be meaningful to society.

At the fourth edition of TEDxIIMShillong, Khanna talked about ‘Confluence in Conflict.’ She believes that the issue of conflict between individual style and luxurious fashion is quite simple as style is an identity that doesn’t require expensive, luxurious fashion.

Aside from her notable moment at TEDx, this fashionista had made us South Asians proud by representing on various other platforms. Khanna was the first Indian woman to have showcased her collection at Paris Fashion Week; she was also a part of the Business of Fashion 500 list! The designer laughs as she talks about the latter experience:

It was unnerving. The only thing I felt was anxiety and more! But, of course, I was super proud.

She even recalls the moment she met the Queen of England (yes, she’s done that too):

The moment was surreal, and although the conversation was brief and elegant, I was in awe.

Everything is AK-OK. Sonam Kapoor in an Anamika Khanna. Styled by @rheakapoor #aok #akok #sonamkapoor #anamikakhanna

She has dressed almost every Bollywood beauty, including the late Sridevi, Kareena Kapoor Khan, Deepika Padukone, Sonakshi Sinha, Shilpa Shetty, Sonam Kapoor, Freida Pinto, and countless others. Her favorite muse she has dressed in Bollywood is Sonam Kapoor Ahuja. Talking a little more in-depth about Kapoor-Ahuja, she says that Sonam is,

Intelligent, beautiful and [someone who] knows her fashion like no one else.

Most recently, the Bollywood diva had posted the inspirational backstory to Khanna’s beautiful creation “Is AK OK.” At this, Khanna comments that,

Fashion is a very powerful medium to tell stories and it is a reflection of who I am.

Talking about fashion as a way to tell stories, have we mentioned how Khanna recently collaborated with Babbu the Painter, too? Amazing!

Wrapping up the conversation with the maestro, we asked her if she thinks Indian fashion has come far? Khanna describes that:

Indian fashion has come a long, long way, but the journey to ‘arrive’ is still far and arduous. From just the ‘Indian only’ scenario, there are very many designers finding barriers and making relevant international fashion. We still, however, need many many more years to create the ‘Fashion House.’

So, in an effort to combat the cons of being in such a difficult industry to make it big, and trying to tell stories through fashion, to eventually create thing “Fashion House,” we asked Khanna to give #BrownGirls some tips.

Believe in yourself, respect and identify where you come from, develop your own style, have patience, and work hard, constantly.

Shezda Afrin is an aspiring physician from Philadelphia, Pennsylvania. Enthusiastic about Public Health, she is heavily involved in non-profits and hopes to leave a positive impact on the children she supports. At the age of four, it was quite normal of her to wear the same outfits and accessories as actresses (such as Preity Zinta) and lip sync the songs like “Bumbro” word for word. Aside from traveling with her family, learning new languages, and witnessing different cultures, she has a passion for event planning. You will probably find her spending her Friday nights binging on Bollywood movies with a plate of mini samosas in hand. Having an innate interest in the topics featured and discussed, she hopes to actively engage in the Brown Girl community.

How Abiha’s Move from Pakistan to the U.S. Changed Her Education and Career Goals

You Girls: Misogyny in America