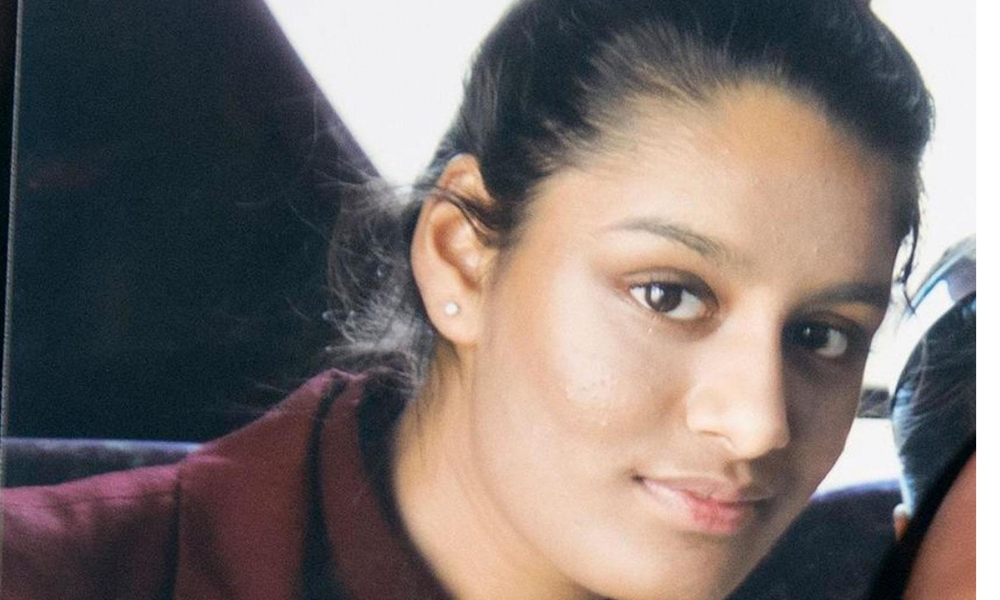 Update as of February 20, 2019: Shamima Begum gave birth to a baby boy on 17 February in Syria. It has now been reported that the U.K. government has stripped Begum of her British citizenship and she will neither be allowed into Bangladesh via her mother’s Bangladeshi citizenship.

Victim or criminal — this was the split over Shamima Begum as news surfaced that the teenager, who left her home in Bethnal Green, London, to go to Syria four years ago and join the Islamic State as a “Jihadi bride,” wanted to come back to the U.K. for the sake of her unborn baby.

Speaking to Times journalist, Anthony Loyd, who discovered her by chance in a refugee camp, she explained that her life in Raqqa was normal.

It was like a normal life. The life that they show on the propaganda videos, it’s a normal life. Every now and then there are bombs and stuff. But other than that….

However, what appears to be a lack of remorse has unequivocally divided opinion on what her fate should be. She said to Loyd,

I’m not the same silly little 15-year-old schoolgirl who ran away from Bethnal Green four years ago. I don’t regret coming here.

Initially, it’s easy to understand why people would take the view of not wanting Begum to return to the UK. It was the first thought that ran through my head upon hearing the story.

Why should she be allowed back in when she made that decision to leave? She left her home and her family, to marry an IS fighter and doesn’t seem to be showing any remorse.

However, there’s a bigger issue at play here and one that involves grooming and being indoctrinated into the ISIS ideology at such an impressionable age. It’s an angle that a lot of people refuse to contemplate as it conflicts with their sense of patriotism and the fact that Begum turned her back on her country. Even as a Muslim it’s hard to lend itself to that thinking when the mere mention of terrorism has us holding our breath, waiting for the onslaught of abuse because of the actions of a handful of people.

The reality is, however, that Begum is a victim of grooming and should be given a chance to be rehabilitated. When we normally hear of these stories pertaining to abuse, there’s usually a common narrative where an impressionable teenager is primed and groomed by their abuser and is eventually lured to meet them where they are then sexually assaulted, raped or killed.

But the story of Begum plays out differently because the purpose behind her being groomed wasn’t for manipulated sex, it was to recruit her and use her as a figure to attract even more young girls to join ISIS. It is just as sickening and cruel as other stories of young people being tricked and manipulated online — and yet there is a huge hesitance to think of her as a victim.

This could be down to her lack of remorse and us wanting to hear that she regrets her decisions. But that’s not how brainwashing works. Having lived this life during very formative years and probably groomed for an extensive period before leaving the U.K., this has become her norm.

It’s easy to assume that her admission of being unfazed by seeing decapitated heads is because she’s a cold-blooded person, but what that suggests is she is someone who has experienced an intense amount of trauma and someone who is completely desensitised to these acts. We have no idea when this grooming started, but chances are she would have been exposed to graphic content like the above during this process at a younger age.

Have we even thought about the fact that she may have said what she said as a form of survival for her and her unborn child? Speaking from a refugee camp doesn’t make her safe. In fact, she’s still very vulnerable to being targeted if it appears as though she’s rebelling against ISIS.

News outlets have said Begum simply wants to return in order to have her baby on the NHS. However, nowhere in her Times interview does Loyd quote her as saying this or mention this himself. Given the complexity of this situation, it’s incredibly irresponsible to fuel even more hostility towards Begum, regardless of how you feel about the situation.

At the time of writing, the security minister Ben Wallace said that he would not be putting officials’ lives at risk to rescue citizens who have gone to Syria or Iraq to join Islamic State.

There’s absolutely nothing wrong in wanting to ensure and consider the safety of the public here. Legally though, Begum is a British citizen and cannot be refused entry unless she has become a national of another country.

That’s not to say she should have the luxury of returning to her normal life. She absolutely should be investigated, questioned and assist authorities with intelligence. She should also prepare herself to potentially be prosecuted. But she also needs serious help. Even though there is a lack of urgency to facilitate Begum at this stage, Richard Barrett, who was formerly head of the United Nations al-Qaeda/Taliban monitoring team explained to the Guardian newspaper that,

Governments have a responsibility to address the problems created by their captured nationals and also to look more closely at why they made the choices they did.

We have things like the Prevent safeguarding programme to protect people from the threat of terrorism and yet, very few people have questioned why this counter-terrorism strategy didn’t pick up on the fact that Begum might be at risk given her social media activity and the fact that she was following more than 70 known extremists on Twitter.

Instead, people are washing their hands of her given the amount of time that she’s been out in Syria, fully convinced that she’s a lost cause when what she needs more than anything are therapy and rehabilitation.

There isn’t a single way in which grooming and trauma can occur and the fact this situation is connected to ISIS and terrorism strips us of the type of sympathy and understanding we would have for any other victims. However, this is yet another example of how young girls can be taken advantage of.

And that’s exactly what she is. A young girl — still a teenager — who yes, made a monumental mistake. Her wanting to return gives us a chance not only to get her the help she needs but learn in order to build cohesion so young people can’t be made to feel isolated. Barrett summed it up perfectly saying,

Governments may fear a rightwing backlash against any treatment of ISIS returnees that looks like going soft on terrorism, but a strong society is one that can take the right course whatever the prevailing wind.

Where we Stand Six Years After Mike Brown: An Introspective

Why You Should Care About the 104 Women in Congress