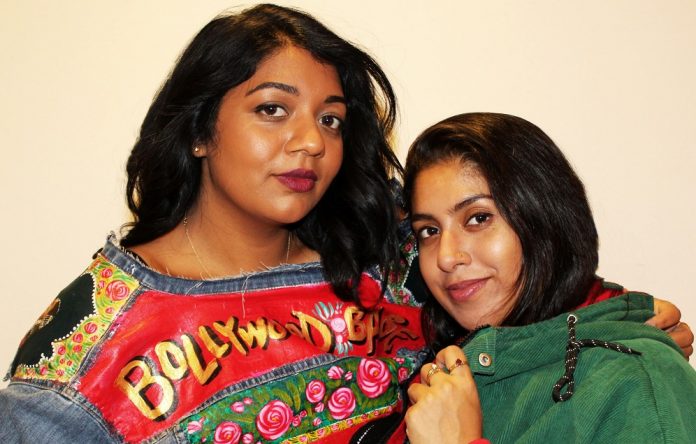 Created by triple threats Zubi Ahmed and Pooja Reddy, who are writers, filmmakers, and comedians, Kutti Gang is a comedy show with a stellar line up of all desi women for desi women and men. It is, as the creators have dubbed it, “an aunty’s worst nightmare.” Today, we sit down with Zubi and Pooja to learn a bit more about their journey to comedy.

[Read Related: Kutti Gang: How Two Desi Women Brought the Tikka and the Masala to the Comedy Scene]

How did you know comedy was the right path for you?

Zubi: After discovering how bad you are at doing literally any traditionally “practical” job, you don’t choose the path, the path chooses you, honey. I just knew that I loved to laugh, entertain, and to write so now I’m here. I’m at comedy. By the way, the path is littered with self-doubt and anxiety.

Pooja: Each uncomfortable redirection in my studies or career path has pushed me closer to uncovering my voice and passion. Eight years ago I was studying pre-med on my parent’s insistence, three years ago I was pursuing my professional passion in the Obama Administration, and this is the first year I’ve followed my creative passion through comedy. Finding your passion is an iterative process and I’ve only scratched the surface on what that means for me creatively.

What inspired you two to create Kutti Gang?

Kutti Gang is a platform for us to highlight the various experiences in the South Asian diaspora. Yes, we are both brown female comedians but we grew up in contrasting circumstances and environments. Zubi grew up in East New York and Pooja in Rural Kentucky. Kutti Gang is our opportunity to promote representation and normalize more than one South Asian story especially among female, gender non-conforming, and queer performers.

Where did the name come from?

The word ‘kutti’ has its own translations in Hindi and Bengali that have negative connotations but we are taking back the pejorative and challenging that connotation to say, ‘Yeah, we are kuttis, so what?’ Kutti Gang is for creatives who are bold and unapologetic with their art.

What obstacles did you face by embracing comedy?

Zubi: For me, the biggest obstacle is feeling like embracing comedy or entertainment is a selfish choice. As if by choosing comedy I’ve betrayed my parents’ hopes and dreams and the sacrifices they made for me.

Pooja: I personally had to overcome my own imposter syndrome for me to believe I had something worthwhile to say. I was worried others would view me as an egomaniac or be uncomfortable if I called myself a comedian. That’s the point though. You’ve got to dream so big you get uncomfortable telling small-minded people. You have to possess the self-assuredness to love and believe in yourself before others will. Mindy Kaling said it best, ‘Why not me?’

How would you describe your comedy style?

Zubi: Charlie Kelly from Always Sunny—I can only hope.

Pooja: I resonate most with storytelling and I’m also known to utilize a PowerPoint during my sets. I need everyone to know that I am proficient in Microsoft Office.

As desi women, did you find it difficult breaking into the comedy scene?

Zubi: It does feel lonely at times. I remember, at one of my first open mics, a comic got up and yelled at me for being Indian and talked obsessively about how materialistic they are and I just sat there steaming because 1. I’m Bangladeshi, 2. Rude, 3. Whose mans?

Pooja: Comedy can be a relentless cycle of cis male open-mics and half empty basements but it promises difficult moments to everyone – no matter what ethnic background or gender you identify with. Finding a support system of creatives you can lean on and audiences who resonate with your material is necessary.

Check out the next Kutti Gang show on January 9th at 7:30 PM at The Tank. You can purchase tickets here. 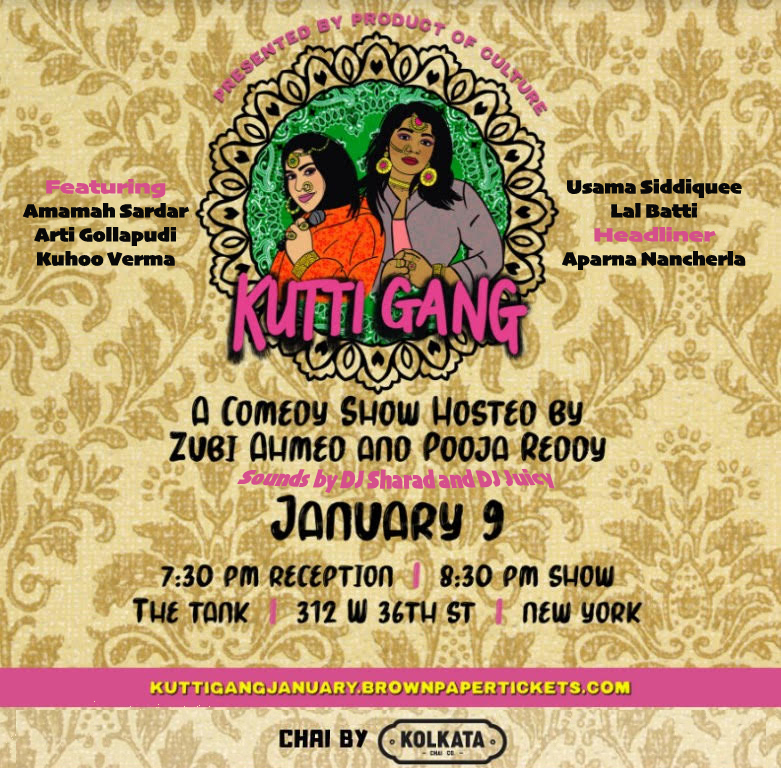 Show Info: Kutti Gang, is on Time Out New York’s list of ‘Best Comedy Shows in NYC’ and it’s all SOUTH ASIAN! Hosts Pooja Reddy and Zubi Ahmed present a stacked lineup of dope performers who are your aunty’s worst nightmare.

Aparna Nancherla will headline the show! Aparna is known for her Netflix special, her role on the Comedy Central show ‘Corporate,’ and will be featured on the upcoming Disney Junio Show with the first all South Asian cast ‘Mira, Royal Detective.’

Born in Brooklyn and confusingly raised in rural Kentucky, Pooja Reddy is a stand-up comedian and writer currently living in New York City. A recovering government employee under the Obama Administration, Pooja now performs her writing at venues such as Caveat NYC, Union Hall, The PIT Theatre, and any bar basement in Brooklyn and Manhattan with a microphone. Pooja hosts and curates two poppin’ stand-up shows called Sweeties and Boom Booms and Kutti Gang, a showcase for South Asian comedians. You can follow her aspirations to be an Instagram Influencer @pooreddy.

Zubi Ahmed is a Bengali-American queer Muslim writer, comedian, and filmmaker. Born in Chicago and raised in Brooklyn, Zubi used to believe the Girl and Boy Scouts were a myth made up by the Disney Channel. Zubi is currently working on a comedy web-series entitled “Polterheist” about a ghost who enlists the help of a teacher (Usama Siddiquee) to cross over to the other side. She is also one of the writer/director/actors of a four-episode mini web-series entitled “Token” about three friends who are so high on their way to brunch they can’t figure out the mystery behind their Uber driver’s death. She cannot wait to share these with her very brown parents.