A year ago, my mother, sister, and I huddled around our T.V. watching Hasan Minhaj’s “Homecoming King.” We laughed at his jokes about balancing different cultures and became quieter when he discussed 9/11 and his experiences with racism. Minhaj is intelligent, witty, bold, and creative – amazing qualities that are seen throughout the South Asian community. And yet, despite our accomplishments and innovations, I remembered what we are reduced to in the eyes of society a few days later, when a fellow student told me they could do a great Apu impression, performed an “Indian” accent with subtle head bobs and looked surprised when I chose not to thank them for appreciating my culture.

Apu Nahasapeemapetilion is a character on “The Simpsons” and is an Indian immigrant who owns a convenience store. Armed with an exaggerated and unrealistic “Indian” accent and his catchphrase “Thank you, come again,” he has been a television staple since 1990. “The Simpsons” satirizes the day-to-day life of Americans; Homer is the dead-beat dad, Lisa is the young social justice advocate and Bart is the unruly and rebellious preteen.

After the premiere of Hari Kondabolu’s documentary “The Problem With Apu,” more and more South Asians have been speaking out about the effect of Apu on their lives and South Asian immigrant depictions in the media. The common response is that “The Simpsons” parodies everyone, so being offended misses the point. But this is simply not true.

[Read Related: ‘The Problem With Apu’: The Impact of Apu’s Character on Desi-Americans Goes Beyond his Accent]

For years, Apu was the primary voice the South Asian community had. When the only representation of a race was a caricature, Apu came to represent reality. This is a uniquely immigrant experience due to lack of representation. Middle-aged Caucasian men are not constantly bombarded with Homer references simply because that isn’t their only portrayal in the media.

I believe people who own corner shops are hardworking, dedicated individuals. I also think finding humour in an accent is bone-headed. Being able to speak two languages should be admired, not mocked. So, technically there is nothing wrong with Apu – he is, after all, intelligent, hard-working, and a compliment to the South Asian community, right? Well, Apu is voiced by Hank Azaria – a Caucasian actor. This is what takes Apu from a caricature to a racist caricature.

Kondabolu had previously described the character of Apu as “a white guy doing an impression of a white guy making fun of my father.” This is accurate and reflects a long history that shares this concept. The idea of minstrelsy began in the 19th century and describes an American entertainment form in which Caucasians would dress up in blackface and perform comic routines that mocked Africans. These “performances” reinforced stereotypes, pandered to racist America and allowed people to profit from degrading others. Although Apu is not as extreme as blackface, there is a shared aspect of the privileged “imitating” the disenfranchised.

The name “Apu” references “The Apu Trilogy,” a series of iconic Bengali films by Satyajit Ray that describe the coming of age of the titular character. Made from 1955 to 1959, they are considered amongst the greatest films of all time. This is an insulting reminder of how Apu Nahasapeemapetilion reduces South Asians in all their complexity and talent to a narrative that embodies minstrelsy. To make things worse, Azaria won three Emmy Awards for this character. Countless Indian-Americans struggle to break into an industry that sees them as cab drivers and terrorists. If “The Simpsons” picked one of them to voice Apu, it would have made their career. Instead, a successful voice actor added a few awards to his name by using a poor imitation of a “friendly neighbourhood Indian.” South Asians had no say in the writing and execution of a character that helped define them for over 25 years.

The movement spearheaded by first generation South Asian-Americans asking Apu to not “come again” on air speaks volumes about the effects of the caricature. This demographic has long been considered part of the “model minority,” the ideal for keeping their heads down and studying hard for the next spelling bee. However, “The Problem With Apu” has opened the floodgates for South Asian-American, Canadian, and British people to speak out about their experiences. Unfortunately, it will probably take a while for these voices to be heard without being immediately dismissed. So, until then, please note that Hank Azaria and the writers of “The Simpsons” are not representing or complimenting the South Asian community with Apu Nahasapeemapetilion. In fact, the only thing we have in common is that Microsoft Word thinks all our last names are spelling errors. 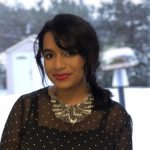 Rochelle Raveendran is a high school junior from Toronto. Having lived in Sri Lanka and England, her experiences in different cultures have led to a passion for learning about cultural diversity in the Western world. She hopes to further this interest through her writing and post-secondary education.