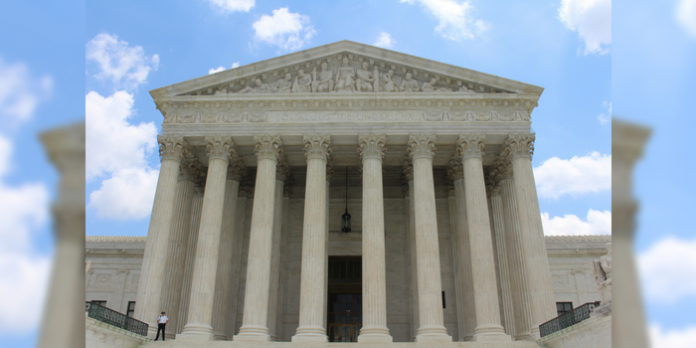 The Supreme Court of the United States (SCOTUS) upheld President Donald Trump’s travel ban on Tuesday in a 5–4 ruling, arguing that the Chief Executive has the ability to limit alien entrance into the United States based on nationality.

Chief Justice John Roberts cited the Immigration and Nationality Act to justify the president’s authority to “suspend entry of aliens into the United States.”

“Because there is persuasive evidence that the entry suspension has a legitimate grounding in national security concerns, quite apart from any religious hostility, we must accept that independent justification,” he added.

The argument under the Establishment Clause, that the ban was motivated by Islamophobia, was undermined although statements and tweets from Trump were cited.

Roberts wrote “Plaintiffs argue that this President’s words strike at fundamental standards of respect and tolerance, in violation of our constitutional tradition. But the issue before us is not whether to denounce the statements.”

“It is instead the significance of those statements in reviewing a Presidential directive, neutral on its face, addressing a matter within the core of executive responsibility. In doing so, we must consider not only the statements of a particular President, but also the authority of the Presidency itself,” he wrote.

This decision served as a massive success for Trump who later took to Twitter to express his “wow.”

“This ruling is also a moment of profound vindication following months of hysterical commentary from the media and Democratic politicians who refuse to do what it takes to secure our border and our country,” President Trump said in a statement issued by the White House Tuesday.

This Court’s decision was based on “Muslim Ban 3.0,” the third version of Trump’s travel ban, which according to the administration involved reviews by federal agencies including Homeland Security, the State and Justice Departments.

The Trump administration withdrew earlier versions of the ban before the Supreme Court was able to hear the administration’s arguments on those orders.

Trump signed the first travel ban executive order at the end of his first week of office, in an attempt to uphold his campaign promise of barring Muslims and creating a “complete shutdown of Muslims entering the United States.” The order focused on seven Muslim majority countries restricting native travelers and stopping the entire refugee program for a period of time without notice.

In March 2017, following protests and outrage, Trump issued a second “politically correct” order. This ban restricted people from six majority Muslim countries, including refugees, unless they were able to prove a “bona fide” relationship in the United States. While it faced opposition, the Supreme Court allowed it to go partially in effect.

In September, the third ban was issued and the Supreme Court allowed this version to go into effect while appeals were being heard in December.

Earlier this year, the court agreed to hear several individuals and groups, including the State of Hawaii, challenge the ban. The main argument was that the latest ban was influenced by religious and Islamophobic animus.

What can you do now?

Support organizations that are working to dismantle institutional and structural Islamophobia.

The time to speak up, if you are able, is now. Silence is compliance.

The hardships immigrants face in the United States are not new to our country’s history. While hate crimes are at an all-time high with the most recent presidential election, immigrants have faced scrutiny since the founding of this country. Educate yourself and learn more about the history of xenophobic policies in the United States.

[Read Related: Why the #MuslimBan Isn’t Unprecedented: A History of Nativism in the U.S.]

Created prior to the Supreme Court decision on the Muslim and Refugee Ban by the Justice for Muslims Collective, this report is a resource guide with information on the history of exclusionary immigration policies in the United States.

Read the report here:
No Entry: The Muslim Ban and A US History of Exclusionary Immigration