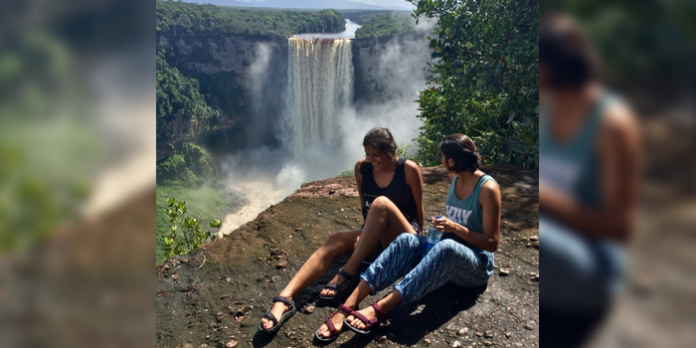 I grew up in Minnesota, land of 10,000 lakes and countless mosquitoes. My childhood and teen years were filled with white people asking me questions reserved for brown skin, like “What language does your family speak at home?” and “Where are you really from?” From a young age it was apparent that, because of my skin color, I wasn’t allowed to tell people I was just American.

I realized I was expected to cite another culture as an explanation for why my skin was different. I soon found that I could escape further conversation by identifying as Indian instead of Guyanese. In doing so, I did not have to spend any extra time explaining why I claimed a different heritage even though I look Indian. I also grew up going to India: My maternal grandfather was Punjabi and my maternal grandmother, while Guyanese, established a base for herself in Dehradun. But every time I told someone my family was from India, I could feel a small tug in the back of my brain leaving me unsatisfied with my own explanation of my roots. I was ignoring over a century and a half of history.

My parents were born in Guyana, and my ancestors experienced the journey on the ships from India to the sugar plantations in the West Indies and the hardships that came with it. So, saying I was Indian wasn’t necessarily false, but each time I did, I would think of my grandmother telling me jumbie stories or my aunt sending me annual birthday treats of pine tart and pera.

[Read More: The Indo-Caribbean Experience: Now and Then]

I knew I was ignoring a large part of myself, my identity.

During this time, I was also distancing myself from learning about anything brown, in general. I was surrounded by whiteness in my daily life and wanted to blend in. I did not want to learn how to prepare a thali or make parathas, and I actively pushed away any knowledge or stories my parents might have offered about my heritage.

It didn’t help that I was constantly reminded of my melanin differences and had to tolerate the assumptions that followed. Once, at a school assembly featuring a talk by a local Native American leader, a boy turned to me and loudly asked, “Is that guy your dad?” At age eight, I was tasked with educating the boy on the difference between indigenous communities and those from the Indian subcontinent and why the groups shared a name. As I grew older, the questions and comments never stopped.

In high school, at the start of winter break, I was asked, “Do you even celebrate Christmas?” During a class of World History, a classmate said, “You don’t count as Asian. India is not even in Asia.” After summer break, my friends would ask, “Oh my God, you got so tan! How do I get as tan as you?” Or, while holding their arms up next to mine: “Look, I’m basically as dark as you now!”

I remember all of these incidents with my white peers with clarity, but I can’t remember how I responded. I probably laughed it off or went along with it, not knowing how to address the complexities of why these comments bothered me so much.

When I relocated to the East Coast for college, the desire to minimize these kinds of interactions and find a better racial support system pushed me to seek out South Asian spaces on campus. While these circles brought some comfort, I found myself still feeling like an outsider, only in a different way. I realized I was well-practiced in holding a shallow conversation about my brown culture with a clueless white person, but it was difficult to partake in those same conversations with my South Asian peers who I felt knew so much more than me. I felt fake, as though they were going to somehow find me out.

[Read More: As a Guyanese-American, My First Trip to India Made me Miss a Place I’d Never Known]

The Guyanese part of my identity would trigger each time I did not understand a reference or a reference I made was not understood. A few times, in a fit of boldness, I tried to make my heritage more visible, but the exchanges discouraged me and made me feel more invisible.

Once, when figuring out where to meet for dinner, I ventured a casual:

Me: “I don’t really want Indian food since I’ve had it twice this week, but I’d be down for some pumpkin and roti or some dhal puri.”

My friend’s answer was disheartening, and I quickly dropped the subject, suggesting a completely different restaurant.

I felt like I had no one to commiserate with when I was craving dhal puri or to “get down” with when I started exploring soca music. I was also too lost and unsure of myself to feel comfortable sharing my thoughts. Minnesota had made me all too familiar with being the spokesperson for Indian culture, and I did not want to fall into the same trap when attempting to discuss the Guyanese aspect of my heritage.

Then came the winter of 2016 when I was lucky enough to take my first trip to Guyana with my family. Seeing the house where my grandmother grew up and looking at my great-grandparents’ immigration papers in the national archives was overwhelming, but it also felt like I could finally stop holding my breath.

That trip shifted something inside me that has allowed me to realize and address my internal roadblocks with less anxiety and to be okay with openly learning more about my history. I am beginning to feel more comfortable identifying and owning that I am Indo-Caribbean-American, while continuing to remind myself that saying so does not have to mean I am an expert in any one of those labels.

I am still learning. Learning that Guyana is much more than a blip on my family’s timeline between India and the United States. Learning that the erasure of the Caribbean identity within the South Asian diaspora is harmful and that I have been perpetuating it. Learning that my diaspora is found in my mom’s long Minnesotan o’s picked up after moving to the U.S. at age six, in my dad’s British accent and penchant for afternoon tea established in boarding school and university in the U.K., and in the Guyanese accent I can’t replicate but so often hear when my grandmother talks on the phone with her siblings.

I am learning a lot and realizing that I must, yet again, challenge my own perceptions of my identity. It is hard and painful, but it is also a long-awaited and rewarding sigh of relief.