Men Have Body Image Issues, Too: This is My Naked Truth 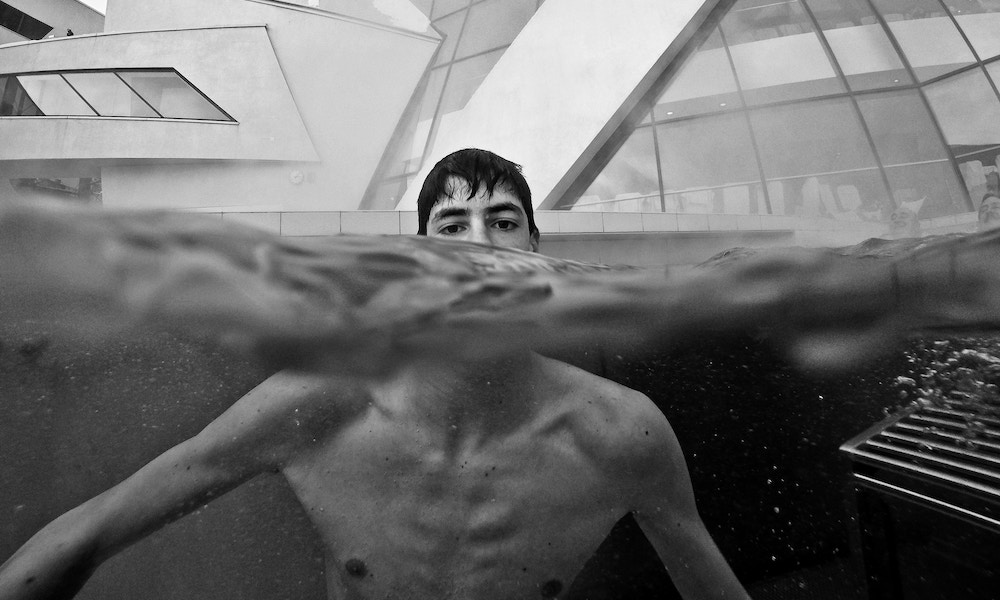 A few months ago, my brother and I were at the grocery store picking up some snacks for movie night. The checkout line was stocked with entertainment magazines and tabloid covers. One of them was Men’s Health—I don’t remember what was on the cover, but they’re all the same. Drop 10 Pounds of Fat Now! 3 Ways to Naturally Boost Your Testosterone. Get Huge Arms and a Chiseled Six-Pack Fast! Something like that, I’m sure. What I do remember is that the cover model’s arms looked as wide as my head, and his abs may as well have been sculpted by Thor’s hammer.

“Look at his arms,” I pointed out to my brother. “They’re huge!”

“Mine are pretty good too,” he joked back, pulling up his sleeve and puffing in his chest, as he flexed. He’s 10 years younger and the complete opposite of me, both in personality and physicality. At 14 years old, he’s in prime puberty. He’s skinny, but you can already see the vascularity in his arms. He does, in fact, have discernible abs.

My body is not like that. I’ve never seen my abs—a nice cushion of belly fat has always kept them well-hidden. I’ve done my best to make sure nobody noticed. Over time, I became very good at sucking my stomach in.

I cross my arms and stand up straight to look tall and defiant. I tuck my hands behind my biceps rather than resting them on top to make them look bigger—in case anyone is looking. Nobody is.

Men Are Insecure, Too

I’ve been slowly coming to terms with my own body image issues, but it’s a strange environment. Women have long faced intense scrutiny for how they look and what both Eastern and Western standards deem ideal. Perhaps the most infamous example in the South Asian community is the propagation of the Fairly and Lovely skin lightening cream, a product that unabashedly markets lighter-skinned women as more attractive.

We’ve begun taking steps to fight these toxic ideals, from the viral #UnfairAndLovely hashtag that celebrated South Asian women of all body types and skin colors to celebrities, such as Vidya Balan, championing body-positivity. Albeit we have miles to go undoing the psychological rewiring of women’s self-perceptions, while simultaneously building a foundation of self-love early on—but it’s a hopeful start.

For men, on the other hand, body image has largely been a non-issue—publicly, anyway—such that the rising prevalence of male insecurities has gone unnoticed. The lack of conversation around this has left many men exactly how you’d expect: alone and insecure.

A 2012 survey of 394 men found that about 80 percent of men talked about their weight, their hairline, their frame, and other physical factors negatively. Like me, 63 percent of these men felt they weren’t muscular enough. And about 30 percent actively thought about their aesthetic at least five times a day.

Feeling self-conscious about our weight is a universal insecurity. But men tend to worry more about being underweight and desire a hyper-muscular physique. This coupled with a negative body image is a psychological disorder called muscle dysmorphia. Those affected may engage in extreme behavior to achieve their desired look, such as over-exercising, hack diets or excessive use of supplements, and even steroid abuse.

But the problem goes beyond the desire to look muscular. Men, too, suffer from eating disorders. According to a report by National Eating Disorders Association, 25 percent of men are affected by anorexia and bulimia. In all cases, research suggests body image issues usually start early in adolescence and are linked to higher rates of depression, anxiety, and suicidality.

Toxic masculinity has defined the “ideal man” to be more than just muscular. Other physical attributes, such as balding or receding hairlines, penis size, and height are also common anxieties. All three are genetically determined, but it’s often promulgated that men with a full head of hair, a large or above average penis, and a tall stature are more desirable than those without. While there are surgical or chemical ways to enhance these qualities, they don’t solve the underlying insecurities of a man’s personal sense of masculinity.

Unsurprisingly, media plays a very large—if not the most significant—role in this. Speaking to The Atlantic, Dr. Raymond Lemberg, a clinical psychologist specializing in eating disorders and body image, suggests that pressure to be hyper-masculine goes back to 1964 when the first G.I. Joe toys were released, likening them to the male equivalent of the Barbie doll. These physiques are also present in comic books, which often draw their heroes to be aggressively muscular (while also painting their heroines to be just as feminine and skimpily-dressed).

Modern Hollywood movies adapt these looks as well. Consider how many celebrity body transformations you’ve seen in which someone packs on muscle mass while shedding significant body fat in an impossibly short amount of time? Chris Evans, Hugh Jackman, Chris Hemsworth, and Alexander Skarsgard come to mind. Even Mark Hamill, the 64-year-old actor famous for his role as Luke Skywalker, spoke about having to lose almost 50 pounds before being able to return to that role in 2015’s “Star Wars: The Force Awakens” (Carrie Fisher, who portrayed Princess Leia, faced even more pressure).

Hitting the Gym… For the Wrong Reasons

Do I wish I had bigger arms or wider shoulders? Yes. Do I see mindfully note a lack of those qualities when I see myself shirtless in the mirror? Yes. Do I worry about my physical appearance when I wear short sleeve shirts? Most definitely. In fact, for most of my college career, I actively didn’t wear short sleeve shirts even in the summer months because I thought the size of my arms compared to the size of my belly made me look disproportionate—and therefore unattractive.

Last year I decided to invest in a personal trainer at my gym. After injuring my knee trying to work out on my own, I decided training with a professional would help mitigate risk of injury in the future. But if I’m being honest, my initial motivation to join a gym was for that “desirable aesthetic.”

[READ RELATED: Open Letter To Everyone Who Tried To Fat-Shame A Confident Indian Woman]

My trainer, Tom Van Langen, has been training clients for almost four and a half years. He estimates that a vast majority of his male clients joined the gym only to look better, not to actually learn proper diet and exercise. These motivations are more common and apparent in younger clients, he says. Langen also notes that these superficial motivators often fall short of keeping clients committed to their routine, so they often plateau with their progress. His older clients, on the other hand, are commonly driven by a desire to become stronger and healthier, so they can keep up with the kids and grandkids. They, Langen points out, are more likely to stay on track at the gym, too.

Gym culture also influences how men conducted themselves. Younger male clients can be less comfortable with admitting they want to become healthier, learn to work out better, and importantly, that they need help. Even trainers sometimes feel uncomfortable talking to younger guys in the gym because they can become defensive. Some of this simply boils down to feeling insecure about themselves and, again, the bigger, stronger, more capable guys at the gym.

“People naturally tend to compare themselves to others around them,” Langen says. “The gym is where the smaller insecurities come out.”

So, how do we combat them?

Education plays a big role. When it comes to gaining or losing weight, it’s important to differentiate between gaining muscle and losing body fat and how diet and exercise both have an impact. It’s also vital to find the intrinsic motivation for why you choose to diet and exercise. Wanting to look better isn’t a superficial motivator. But if you’re not doing it for yourself, it can be.

Secondly, it’s key to understand that bodies portrayed in media (both male and female) are often enhanced and airbrushed to look larger than life. In a nutshell, they’re not real. Given that Americans adolescents and young adults spend more than seven hours engaging with media, this is a critical factor to consider.  Younger men are more prone to media bias but are also more receptive to receiving help. In an interview with The Huffington Post, Dr. Aaron J. Blashill recommends actively talking to boys about body image rather than waiting for them to speak up. He stresses the importance of viewing these issues and disorders as psychological ones and not physical ones.

The field of psychology also has work to do. Assessment tests for eating disorders often include language tailored to reach women, which poses an additional roadblock for men who do want to seek help. Lastly, we as consumers can demand more of the media we ingest. We can support films and shows that portray a wide variety of body types, especially in leading roles.

We can use our social media platforms to break down stereotypes promoted by toxic masculinity and femininity and uplift individuals who do not fit into the thin, light-skinned body types valued by Hollywood and recent Bollywood media. Most importantly, we can create environments (online, in a classroom, in a one-on-one dialogue, etc.) where individuals, including men who may not feel comfortable being vulnerable in front of others, can speak about their insecurities freely and without fear of judgment.

As for me, I didn’t initially want to admit that I was (and still am) insecure about my own physicality so publicly. The irony of that is not lost on me. I still see those Men’s Health magazines every time I’m at the grocery store checkout. Part of me still wishes my body looked exactly like those of the models emblazoned on the covers.

“But choosing to learn more about toxic masculinity and the psychological effects it has on men has taught me at least one thing: I am not alone.”

Over time, I’ve learned to slowly tune out those harmful images and just focus on myself. And hopefully one day, I’ll truly be able to grow into my own skin.

For more information on mental health in the South Asian community, check out MannMukti—ending the mental health stigma, one story at a time.

Viren Shinde is a programmer by day, a photographer and writer by night, and a consumer of all things caffeine 24/7. He loves to tell stories and dislikes it heavily when people leave the volume knob on an odd number. Viren strives to create content that captures snippets of the brown identity and unpacks the personal biases of the South Asian diaspora. In his spare time, Viren loves to watch movies, play board games, and try and find the best happy hour deal for tacos on the block. You can follow his photography journey on his Instagram @virenshinde_

An Open Letter to Boris Johnson: ‘The Niqab is a Symbol of Faith not Oppression’

3 Ways Every Brown Boy Can Rock the Hat this Summer

Victim-Blaming Doesn’t Work: If You Want to Help, Listen to Victims First