I was at the top of my game having just graduated college with a Wall Street career and BAM, just like that, the colitis hit. At the tender age of 22, when my life was just beginning, my existence became a perpetual case of bolting to the nearest bathroom. Between wearing diapers and trying to date while popping pills and using enemas, I began to realize how tenuous life is. It was a scary proposition because my father passed away at 39 from a wicked case of Crohn’s that turned into colorectal cancer, and his sister quickly followed suit. And here I was, barely awake from the first of 100+ colonoscopies, hearing the words ulcerations and inflammation thrown around.

Today, 12 years, 20+ surgeries and hundreds of procedures later, I’m still alive and kicking. I continued working in investment banking, taking time off to mend from surgeries until the stress, the fatigue and constant flare-ups did me in. A decade ago, after returning from Cancun, I developed a horrible case of food poisoning and I was never the same. I took antibiotics, which gave me another debilitating infection, c.dificile, which resulted in 20 bowel movements a day, watery diarrhea, nausea and dehydration.

That c.diff brought about a never-ending colitis flare that lasted 8 years. After having an accident, I cried in my doctor’s office as I continued to lose weight and along with it, my sense of self and personality. In December 2007, I was 135 lbs. Six months later, I had tried every medication, lost 50 lbs., and was being fed by an intravenous line. I was dying.

I was rushed to the hospital where my surgeon removed my colon on the 4th of July. I was told death was certain if I didn’t have surgery. As Independence Day came and went, I woke up thrilled to have a new lease on life thanks to my ostomy.

I went on to have more surgeries to reverse the ostomy and have a j-shaped pouch fashioned from my small intestine. It was a miracle to defecate like a normal person again but before long, I developed pouchitis, another brand of IBD that hits in the j-pouch and causes bloody diarrhea.

After retrying several medications, my pouch began to fistulize, or burrow holes into other organs. My diagnosis was changed from colitis to Crohn’s. I developed a total of 5 morbid rectovaginal fistulae, which resulted in UTIs galore and immense pain and bleeding.

To allow the fistulae to heal, I was again rushed to the operating table and was given another ostomy. But the Crohn’s kept spreading and I was told to have the pouch excised. I had fought so hard for 6 years to keep that pouch. I felt like I had failed.

My pouch was removed, and I was left with a large wound and a permanent ostomy. Except the wound never closed. I bled for months and went for a second opinion. I was told that the Crohn’s had continued with a massive abscess where the j-pouch once was. A pelvic fistula had formed and was headed for my tailbone; if I did nothing, it could paralyze me. Major corrective surgery was my only option but the risks were too great for me to stomach.

So I went for a third opinion where the surgeon tried a novel technique. He re-excised the pouch 3 more times to ensure no diseased bowel was left behind. He created a wound the size of a small football, attached a wound VAC and debrided the wound every alternate day. After a month, the VAC was pulled, leaving a 3-inch deep wound for my mom and husband to pack.

After such excruciating pain, I thought I was out of the woods, but the Crohn’s continued. Another RV fistula was found, which was perplexing because I had no rectum. It was just a hole, something I was told had only been seen twice before. My doctor prescribed antibiotics, chemotherapy and an immunosuppressant which was still in clinical trials. It took several months of misery, but the wound and fistula finally closed.

Come 2016, the word “remission” was being thrown around for the first time. And I didn’t know what to do with myself. When a disease snatches one’s womanhood, how does one begin to resurrect oneself?

Nevertheless, after 3 near-death experiences, I am thankful to be alive and for every single surgery and every single breath. Every time I have fallen, I have picked myself up higher than before. My medical staff, my friends and family and the Foundation are my rocks, my backbones and a source of constant support.

Nearly 2 years later, yes, I have 8 new diagnoses to manage, but I refuse to give up. Not a single day goes by without me remembering how far I’ve come and how much life I have yet to live. I may not be able to work but I am able to volunteer between health crises. Co-facilitating the Foundation’s Women’s Support Group has given me a voice, a platform to raise awareness and help women like myself advocate for treatment and maintenance of care.

IBD may be a beast, but it is worth putting up a fight for our lives. IBD may derail our careers, educations and relationships but it cannot take away who we are at our core. We must never lose hope.

Here I am today, fighting in the memory of my late father and for my dear mother and husband. I fight for new treatments to be developed and for a cure someday. I fight for you and me, for all of us at the Crohn’s and Colitis Foundation. Thank you for selecting me as your Honored Hero!

Join the fight and walk with me on Thursday, May 17th:
Pier 16 at the South Street Seaport |5:30pm Walk-site Opens | 7pm Walk Start 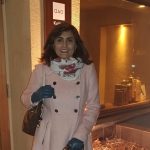 Tina Aswani Omprakash is from the NYC area and her background is in legal and compliance for financial services. Due to the severity of her Crohn’s and multiple extraintestinal manifestations, she has been unable to work. Nevertheless, she is a proud volunteer and the 2018 Honored Hero for the NYC Chapter of the Crohn’s and Colitis Foundation. As a Crohn’s patient, Tina has served as a case study for a number of renowned doctors and surgeons across the country. Medical staff and researchers have been particularly intrigued by the rare yet aggressive genetic progression of her disease given my South Asian heritage. She hopes that the research done on her will someday serve to help future populations of IBD patients. In a world where the #metoo movement has erupted, she believes it is high time for patients like herself to speak up about the ravaging aspects of chronic illness and disability. She hopes to give brown women suffering in silence and in shame a voice that creates greater awareness and acceptance of our daily struggles. You can keep up with her at her blog.