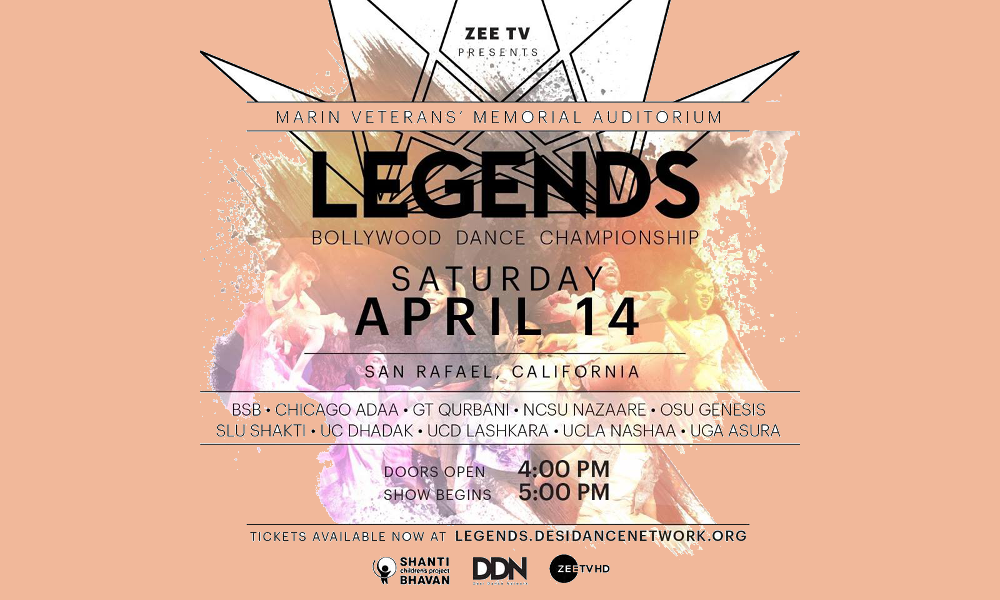 On April 14th, 2018, Legends Bollywood Championship will be hosting its second annual, intercollegiate national dance championship in San Rafael, California at the Marin Veterans’ Memorial Auditorium—Marin Center. After a successful first year, Legends intends to be bigger, bolder, and create an unforgettable experience for its participating teams and audience members the day of the event. Proceeds from the event are donated to Shanti Bhavan—a school based near Bangalore, India, with a strong emphasis on helping their students succeed academically and explore their strengths artistically.

Final stop: Zee TV Presents: Legends Bollywood Championship 201810 of our BEST teams from across the nation take on the most exhilarating competition weekend of the season in the Bay Area, California!Tickets are available now so hurry up because you don't want to miss this: https://tickets.marincenter.org/eventperformances.asp?evt=242Broad Street BaadshahzOSU GenesisChicago AdaaUCLA NashaaUGA AsuraNCSU NazaareUC Dhadak International Dance TeamGeorgia Tech QurbaniSLU ShaktiLashkara at UC Davis

The competition itself features 10 dance teams, and three exhibition acts traveling from around the nation to compete for the title of Legends Bollywood Champion. The teams base their performances around a theme, which has been edited and perfected throughout the course of the year. Themes vary from light-hearted, childhood nostalgia such as “The Jungle Book” and “Scooby Doo,” to non-fictional retellings of Hasan Minhaj and the late Stephen Hawking’s life, to dramatized Bollywood interpretations of classics such as “The Fresh Prince of Bel-Air.” Each of the attending teams have competed tirelessly across the nation and earned the chance to showcase their unique strengths and passions this upcoming Saturday.

Legends USA launched in 2017, as an initiative of the Desi Dance Network, Inc. (DDN) – a platform for dancers from collegiate circuits to engage and share their passion for dance. The platform also provided the initiative with the necessary financial support and resources to ensure a successful debut last year, and a smooth show this upcoming Saturday.

A member of the Legends Executive Board, Shivani Patel said,

“As dancers, organizers, and members of the official nonprofit, we felt that we needed a national championship that reflected the pillars of quality, community, and competition. It was really important that the championship should be created by active members of the DDN community, so that the values and experience could be curated from the point that invites are sent out until the last team leaves our competition.”

An integral part of the weekend is ensuring that everyone involved in Legends, from teams to the executive board is engaging with Shanti Bhavan. Rishi Modi, a member of the Legends Board said,

“When looking for a beneficiary to support, we wanted to find an organization that strongly resonated with our core values: showcasing and promoting South Asian performance arts both domestically and abroad. Shanti Bhavan Children’s Project stood out as an anomaly to most institutions of its nature.”

Legends has worked with Shanti Bhavan throughout the year and used their platform and teams as a method to promote their cause in a beneficial manner, over social media.

The championship and its founders have focused their attention heavily not only on ensuring ticket sales, but also ensuring that the weekend is an enjoyable and unforgettable experience for all parties involved. Each aspect of Legends, from the start of the competition season and the newly established scoring system to the Sunday of the teams leaving their hotels, has been carefully curated to maximize the team’s productivity and the enjoyment of everyone who is a part of the experience.

In the future, they intend to build and expand on their relationship with universities that promote South Asian arts and build a more permanent relationship with their beneficiary— Shanti Bhavan. Undoubtedly, Legends and DDN will continue to provide South Asian performers with a supportive platform to showcase their abilities and champion the South Asian community.

Friends in the Cali area, be sure to purchase a ticket for the show and keep up with the madness on their Instagram.

Subha ho gayi mamu! ? The @bbaadshahz are on their way to tell their 10th tale but will King Arthur prevail? ?? #YEEEER

A post shared by Legends Bollywood Championship (@ddnlegends) on Apr 9, 2018 at 9:51pm PDT

Isha is an Economics major studying at the Ohio State University. She is passionate about ending the stigma that surround assault and eradicating rape culture in South Asian societies, one problematic practice at a time. In her spare time, Isha is an avid reader, an SRK enthusiast, a Harry Potter junkie, and in her dreams, the next Vyajanthimala.