Our understanding of American racism has changed immensely in the past 150 years. During the Civil War, perhaps someone who refused to own slaves was the wokest white man. Then slowly, the bar for “non-racism” started rising. Would you dine with a black man? Drink from the same water fountain as a black man? Let a black woman keep her seat on the bus? Let colored people have a say in the government that rules them?

Donald Trump claimed he was the least racist person ever interviewed by a group of reporters. It’s true. Because in Donald’s eyes, a racist is someone who lynches black children. Not someone who ends DACA, a program that protects undocumented kids. Not someone who bans Muslims from entering the States. Not someone who prefers Norwegian immigrants to Haitians.

The bar is low.

But keep in mind both Republicans and Democrats backed racist legislation before the Trump era. Trump is the Regina George of American politics — I know he can be really mean sometimes, but there’s good and bad to everybody, right? He’s just more upfront about it.

Luckily, we are now recognizing covert racism in action despite authoritarian denial. Whether through economic policy, housing, education, healthcare, immigration, or criminal justice, we are acknowledging that certain lives don’t matter. Much of society is no longer in denial that racism is alive and thriving. Institutional racism is being understood by more Americans, and, as a result, those in power are having to answer for it.

Women could not vote until 1920, so the first 132 years of U.S. policy was decided by white men exclusively.

Not much has changed.

It seems that in order for a woman to be deemed a victim in a situation of male entitlement, she has to be physically attacked. Threatened. Forced. She has to be enslaved.

The bar is low.

Questioning the actions of male crime victims is considered heartless, ignorant victim-blaming. Let’s take police brutality victims, for instance. Well, why did he have a gun? Why didn’t he just cooperate? Why did he run? But he had a record. He was selling crack! He was wearing a hoodie!

I have a favorite white guy. He’s that guy who is sincerely invested in what happens to non-white members of society. But he takes his empathy even further to a level of humility. He says, I will never understand the non-white experience; therefore, I will stand by you, I will fight for you, but I won’t speak for you or pretend to get it. My privilege will always prevent me from truly understanding where you come from.

[Read More: ‘#BlackLivesMatter and Dallas: How it Matters to me as a South Asian’]

Social movements evolve. The #MeToo movement won’t be hindered by a story that is “not as bad” as the others. (Grace, the victim in the Aziz Ansari incident, never claimed #MeToo.) Think back to the fire cartoon used to explain #BlackLivesMatter. Even the smallest fires must be extinguished to prevent the whole neighborhood from burning down.

Even in my progressive Indian family, guys can do whatever they want, and girls must play it safe. Indian parents advise their daughters to dress conservatively, come home earlier, and not drink alcohol, but do they teach their boys to not be creeps? (Apparently not, Mr. and Mrs. Ansari.)

Should I keep the bar low, and be content that my family wouldn’t disown me if I got raped? Is that how we achieve progress? By compartmentalizing and dismissing everything that’s “not as bad”? Will we fail to learn where male entitlement originates and why it is flourishing? Will we pretend that the playing field is even just because a woman’s place is no longer in the kitchen? Will we move past this phase of denial? Is lynching the only real racism? Is your bar low?

[Read More: ‘It’s Not About Aziz and Grace: Debunking Myths and Getting Real About Consent’]

Reread the original story and every time you see the word “Aziz”, replace it with “Trump”. Then it might register that Grace did verbally say no repeatedly, and you won’t be so defensive of your precious woke comedian. The same comedian who says in his book, “Modern Romance”:

“Your most casual encounter could lead to something bigger, so treat those interactions with that level of respect.”

As an Aziz fan who had faith in his goodness, you refuse to walk away from him even after hearing this story. Yet you expect a smitten fan, who had that same faith, to immediately walk away from his apartment? The imbalance of power is laughable.

As a girl, I have to speak louder, more often, and make sure I get it just right every time I try and make myself heard, and even then, it doesn’t usually work. If I am heard, I’m “emotional” or a “bitch”. We have been catering to men our whole lives, whether it be in conversation, relationships, or sex. A woman’s voice, needs, and desires are rarely validated and paid attention to, and the longer we sweep these incidents under the rug, the longer that dynamic continues. Ladies — stop letting this slide. 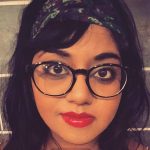 Vidhisha Babbili is a first-generation Indian-American who lives in the Dallas-Fort Worth, Texas area. You can connect with her on Twitter @vide0head.