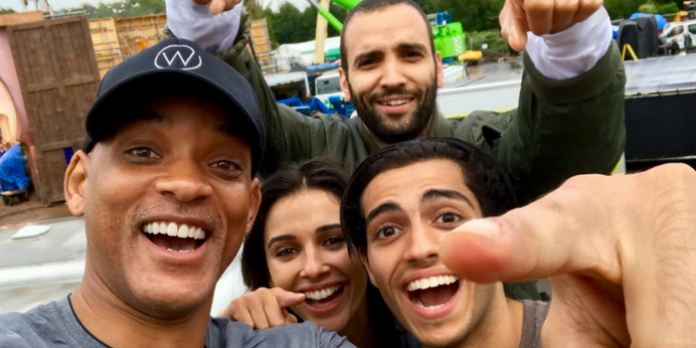 Disney is in hot water after issuing a statement defending the practice of tanning extras on the set of its new Guy Ritchie-directed film “Aladdin.” The film is a live-action version of Disney’s 1992 animated hit, based on a tale from The Arabian Nights. The original movie was also critiqued for the stereotypical and offensive language used in some of its music, including the use of the terms ‘savage’ and ‘barbaric’ to refer to the Middle East.

The movie is set to hit cinemas in March 2019 and has already caused controversy, especially after British-Indian actress Naomi Scott was cast as Princess Jasmine and a new character was added for white American actor Billy Magnussen.

Despite an ample supply of colored actors worldwide, Disney’s statement said they met great difficulty when searching for a colored cast — which more than raised the public’s eyebrows.

[READ RELATED: ‘Kali’ a Poem on Having Dark Skin]

Actor Kaushal Odedra, who worked as an extra on the film, told The Sunday Times that he saw a queue of 20 actors waiting to have their “skin tone changed.”

“On one set, two palace guards came in and I recognized one as a Caucasian actor, but he was now a darkly tanned Arab,” he told the newspaper. “I asked a Saudi cast member what he made of having these extras being tanned so heavily. And he said it’s unfortunate, but this is how the industry works, and there’s no point complaining about it since it isn’t going to change.”

When addressed with the issue, Disney didn’t deny the tanning. Instead, they told BBC’s Newsbeat that “great care was taken to put together one of the largest, most diverse casts ever seen on screen.” The company stressed that “more than 400 of the 500 background performers were Indian, Middle Eastern, African, Mediterranean and Asian.”

“Diversity of our cast and background performers was a requirement and only in a handful of instances when it was a matter of specialty skills, safety and control (special effects rigs, stunt performers and handling of animals) were crew made up to blend in,” a Disney spokesperson added.

Despite progress, representation of colored people in the media is still lacking or stereotypical. Often when darker skin tones are cast, they are made to play stereotypical roles with heavy accents — feeding stereotypes instead of eradicating them.

“Disney [is] sending out a message that your skin color, your identity, your life experiences amount to nothing that can’t be powered on and washed off,” Odedra said. “Also, if I’d wanted to discuss it, speaking to the almost entirely white crew seemed somewhat intimidating.”

“I wonder if the shoe was on the other foot – where brown actors were hired and had their skin lightened to play, for example, the royal family – whether this would be seen as OK,” he added.

Prominent actors and figures such as Kal Penn, known for his role as Kumar in the hit “Harold and Kumar Go to White Castle,” showed their dismay.

“I love Disney so much,” Penn tweeted.

“But when a PR person says they decided to put 100 people in Brownface in 2018 because not enough of us are qualified, that’s bs, someone just didn’t want to spend the $ to do it right. Let’s all expect more & do better this year,” he added.

I love @Disney so much. But when a PR person says they decided to put 100 people in Brownface in 2018 because not enough of us are qualified, that’s bs, someone just didn’t want to spend the $ to do it right. Let’s all expect more & do better this year.https://t.co/MzZJp6jvPB

Bafta-nominated director Riaz Meer, a member of the Broadcasting, Entertainment, Cinematograph and Theatre Union’s black members’ committee, told The Sunday Times that the practice of “browning up” is an “insult to the whole industry.”

“The talent exists and is accessible and there’s no way that Asian extras could not have been hired to meet the needs of the film,” he continued. “Failing to hire on-screen talent of the right ethnic identity to meet the clear needs of this production is just plain wrong. We expect better from all filmmakers.”