#BornConfused15: ‘Tanuja Desai Hidier is not Afraid of the Messiness of Coming of Age’ 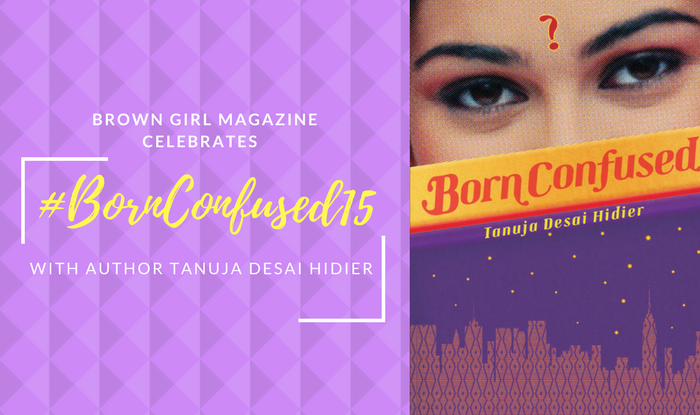 Several years ago, Tanuja Desai Hidier and I were having lunch and she explained that the identity issues depicted in her novel Born Confused were those she had experienced during her college years and 20s, not her high school years. Yet she decided to graft those emotions, those turbulent ups and downs, into a fifteen-year-old character.

What I find interesting about that choice is that of ambition—a decision not to restrict because she was writing YA, but to expand—into music and culture and eventually, with her India-set sequel, Bombay Blues, into geography and questions of belonging.**

That’s where Tanuja and I share a space in the YA world—believing that our readers deserve greater ambition in the stories we are bringing to them. For me, the subject is often the political pressures that bear down on young people, especially immigrant, South Asian, or mixed teens in our post 9/11 world (though I’m now writing about an earlier era of the 1970s).

Thus the significance of Born Confused is less about it being a first as a South Asian coming of age story, but more as a genre-busting novel that insists we can write about identity, coming of age, friendship, romance, sexuality, cultural appropriation in one big, teeming book.

Tanuja is at heart a maximalist—she takes all of herself, all of her cosmopolitanism, her musical passions, her poetic love of language—and pours that into the capacious sprawl of a novel. She’s not afraid of the messiness of coming of age. One can’t separate Tanuja from Dimple; her generosity as a person shines through in the prose and the searching, meandering, musical lines of connection.

I now have a seventeen-year-old son (hard to believe someone of Dimple’s age!). He too straddles all kinds of identities—he is mixed, part Jewish, but Indian in appearance, and has grown up immersed in black basketball culture. He is decidedly brown, yet un-placeable. It’s given him a passion and throttle about racial justice and yet he’s a genuine patriot, who yearns to serve his country—perhaps even the military, much to the shock of his parents. But that’s who our teenagers are—complicated, contradictory—and we need as many books as possible that don’t underestimate their messiness, their striving, and their thorny searching.

Right now, as we suffer through this nativist era, a political administration that seeks to repress and shut down, we need the genre-busters, the rule-breakers, the inventive world-makers, to smash things up; to insist that we are here, our children are here.
And that we are not going away.

Marina Budhos is the author of award-winning fiction and nonfiction; her most recent novel is Watched.

It’s All In A Name

What is VOICE 4 Girls?