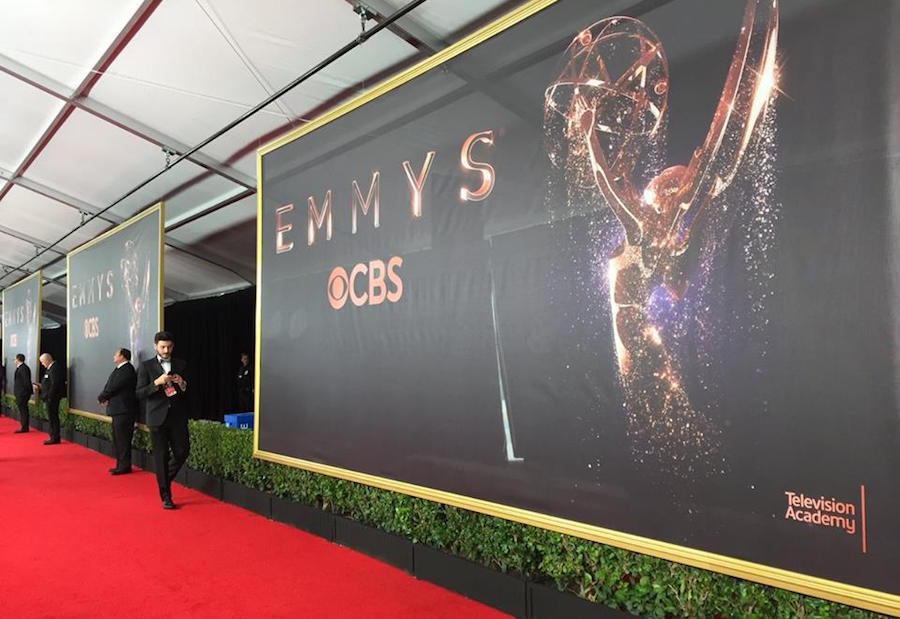 Or at least that was the motto at the 69th Emmy Awards last night. Television’s highest honors have often emphasized the importance of showcasing and applauding diversity. Hosted by Stephen Colbert, this year’s Emmy Awards, once again beat the whole #OscarsSoWhite phenomenon by putting some of the spotlight not only on people of color but also by bringing women to the forefront. (“Big Little Lies!” “The Handmaid’s Tale!” “Veep!”).

Sure, there were some truly WTF moments, too  — Yes, I’m looking at you, Sean Spicer! However, I choose to appreciate the slow but certain growth we saw at the Emmy Awards this year in terms of representation, especially South Asian representation because you guys, our heroes were really rockin’ it and it didn’t go unnoticed.

Going directly from Aziz & Lena Waithe winning to Kumail presenting the next Emmy would have blown my mind as a kid. How awesome. ??

The best way to showcase the responsible growth and diversity representation is by celebrating some really solid, emotional acceptance speeches. Winners used their platform not only to thank those who helped them get there but by just really speaking their truth  and delivering a message that matters.

Yeah, our talented and woke sweetheart, Ahmed won the Best Actor award for his brilliant performance in “The Night Of.” He is not only the first Muslim to have ever won an award in this category, but also the first South Asian male actor to win an acting Emmy. Way to go, Riz!

In his heartwarming speech, he shone light on how this HBO miniseries brought to light the emergent Islamophobia. He also gave a shout out to the South Asian Youth Association and The Innocence Project. I think I teared up.

These two geniuses won for their absolutely stunning writing for the season 2 “Master of None” episode, “Thanksgiving.” Literally, everyone out there stood up to give these two a standing ovation! In it, Waithe took inspiration from her real life, and is also the first African-American woman to win an award for her comedy writing. The episode focuses on a series of thanksgivings, which leads up to her character Denise finally coming out to her mom.

Most importantly, in her poetic acceptance speech, Waithe had a beautiful message for the LGBTQIA community. She said it best, “Thank you for embracing a little Indian boy from South Carolina and a little, queer, black girl from the south side of Chicago.” YAS QUEEN.

Hollywood’s very own Kidman, who truly gave the performance of her career in HBO’s ‘Big Little Lies” didn’t shy away from talking about domestic abuse, rightly calling it an insidious disease. On the show, her character Celeste is the battered wife of her violent husband Perry (played by Alexander Skarsgard, who also won an Emmy for his role). She rises from the meek housewife into someone stronger, bolder, and smarter.

I’m so glad Kidman used her platform to embolden other women who might need it.

I mean, Brown was positively the highlight of this year’s Emmy Awards. I say this not only because of how sincere he was in his performance in NBC’s “This Is Us,” but because he brought that sincerity with him on stage as he accepted the award. Brown is the first African-American actor to win the lead actor award in 19 years, after Andre Braugher who won in 1998.

Unfortunately, the poor guy was played off stage before he could even finish his speech. Luckily for us, he got to finish his passionate speech backstage.

Here's the rest of what @SterlingKBrown would've said on stage had he not been cut off. #emmys pic.twitter.com/GY16euo163

To no one’s surprise, “Big Little Lies” cleaned out the Emmy Awards last night with several wins, including Outstanding Limited Series. Witherspoon, who not only starred in it but also executive produced it, spoke along with fellow co-star Kidman while receiving the award.

In her speech, she thanked the Academy for finally acknowledging shows that are women-led and tell inspiring stories, hoping that it will lead to more women being cast in meaningful roles.

It’s safe to say this one is going in the records. Glover won two awards for his successful comedy “Atlanta:” Outstanding Lead Actor and Outstanding Director in a Comedy Series. He made history as the first African-American man to win an Emmy for Best Directing and the first African-American actor to win the trophy for Best Actor in a Comedy in 32 years.

Most notably, he thanked POTUS in his acceptance speech “for making black people number one in the most-depressed list,” citing that is his reason for being here. Ha!

In another unsurprising but extremely deserving win, Baldwin won for his parody of Trump on “Saturday Night Live,” which is possibly the most talked about performance of the last year.

The actor is brilliant on the show and yes, his opening line of his speech was “Mr. President, you finally have your Emmy. Because remember how miffed Trump was in the debates against Clinton that he didn’t win the award for “The Apprentice.” Well, Colbert didn’t forget and even played the clip as the award ceremony began.

That’s right. This wonderful woman won for her prolific direction for “The Handmaid’s Tale” pilot, the first female to win this award in 22 years! The episode, “Offred,” is really a masterpiece.

In her speech, Morano only encouraged girl-love by thanking and idolizing all her counterparts on the show, including author Margaret Atwood and actors plus fellow Emmy winners/nominees Elisabeth Moss, Ann Down, Samira Wiley, and Alexis Bledel.

[Read More: How the Golden Globes was a Lesson in Highlighting Diversity]

All in all, the Emmy Awards still have a thing or two to learn about properly celebrating diversity (never, ever cut off Sterling K. Brown again!). However, the fact that shows like “Master of None,” “black-ish,” “Atlanta,” “The Night Of,” “Big Little Lies,” “The Handmaid’s Tale,” were nominated and won awards proves that the audience is more than ready to watch television that represents them, reflects their lives, and is bold enough to go beyond the ordinary.

Let these shows take over. Let representation and diversity and uniqueness take over. We. Are. Here. For. It.

Menstrual Man: The Man and the Documentary

‘Sanju’ Review: A Manchild Blames Fake News — And I Totally Bought it