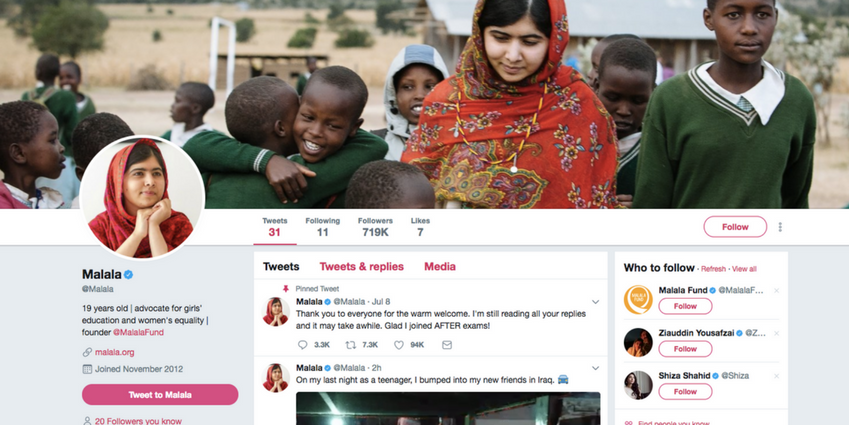 After winning the Nobel Peace Prize, starting her own nonprofit organization, co-authoring a book, and earning honorary Canadian citizenship, it’s Malala Yousafzai’s entry onto the Twitterverse that has gotten us excited.

She is already using Twitter as a platform for advocacy. After her first tweet, “Hi, Twitter” – earning 263,000 likes – the next seven tweets were a call to action. She explains that she finishes high school, a bittersweet moment as she knows so many young girls around the world will not have the same opportunity. She informs the Twitter world she is on her way to the Middle East, Africa, and Latin America to speak to girls there, and that their voices “are the most powerful weapons in the fight for education and equality.” She then asks her followers to join her in her fight for girls.

Her next two tweets are for the Edhi Foundation in Pakistan and a reply to a welcoming tweet from the President of Colombia. In her last tweet, she endearingly admits her attempts to reply to everyone and that she is happy she joined Twitter after she finished her exams, reminding us all that, while Malala was on Time’s list of most influential people for three years in a row, she is still just a kid.

For the last year, I cringe anytime anyone mentions Twitter. Our current Tweeter-in-Chief, Donald Trump, uses his Twitter account not as a platform to effect change, but one in which to bully, promote conspiracy theories, and dwell on pettiness. His juvenile behavior undermines the respect once reserved for the office of the presidency.

The U.S. president is a child and embarrasses the nation on Twitter. Fortunately, Malala is a grown up and has brought with her simple handle hope and advocacy – and complete, grammatically correct sentences.

Also, happy birthday to the budding Twitter user, Malala, we can’t wait to see what you do next. 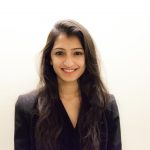 Rucha Desai is a recent graduate of NYU School of Law. She enjoys writing, hula-hooping, choreographing dances with her little sister and watching the “West Wing” with her husband. She has lived in NYC for almost a decade and is still constantly surprised by its many secrets and new adventures.

What it Means to be a First Generation Desi——From the Lens of a Half-Indian, Half-Irish Woman

India Diaries: VII That Time I Met Monica Dogra at a Club

Here’s How Your Pajamas Just Got Cooler!

National Coming Out Day: What ‘Coming Out’ Means in the South Asian Community