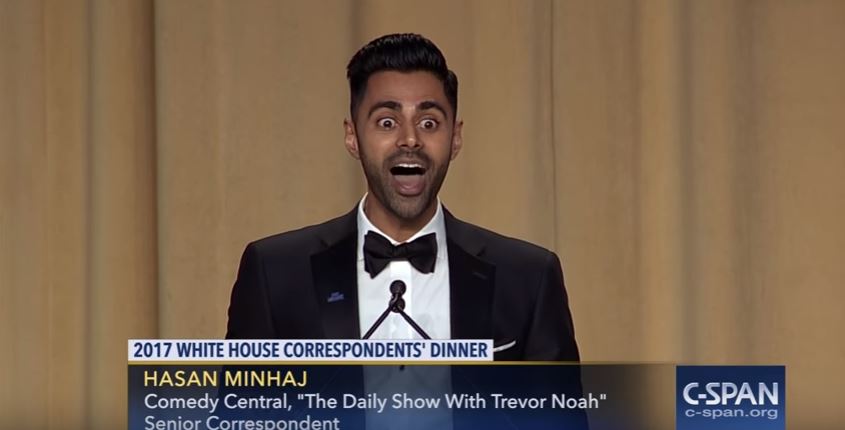 Saturday night was the White House Correspondents’ Dinner we were all waiting for, an annual tradition Washington, D.C. when comes the press and administration come together for a light-hearted night of celebration (or better known as roasting the president and his cabinet). Of course, this year, President Donald Trump missed out on the fun. But who really cares because the headliner was none other than The Daily Show correspondent, Hasan Minhaj.

We’re huge fans of Minhaj here at Brown Girl Magazine, but after this Saturday he gave us, even more, reason to be. Simply put, he killed it. Minhaj roasted our dear president to a crisp. He doled it out in equal measure to the media and other members of the administration. But beyond being hilarious, Minhaj’s routine was poignant and honest as he held both the government and the media accountable for their actions and reflected on his own role in American society.

Here are the top ten moments from Minhaj’s routine.

1. He let us know right away that Muslims are no stranger to the White House Correspondents’ Dinner Stage while throwing the Birther Movement some shade.

“Who would’ve thought with everything going on in the country right now a Muslim would be standing on this stage, for the ninth year in a row, baby? We had 8 years of Barack, what’s another year? I see you, fam! I see you Barry!”

2. Minhaj reminded us that #ImmigrantsGetTheJobDone because he took this gig when no one else would.

.@HasanMinhaj: “No one wanted to do this so of course it lands in the hands of an immigrant.” #WHCD2017 #WHCD #NerdProm pic.twitter.com/h5k70XqtvR

3. Despite a supposed warning to “not go after the administration,” he addressed the awkward absence head on and offered a perfectly good explanation.

.@HasanMinhaj: “The leader of our country is not here — And that’s because he lives in Moscow” #WHCD2017 pic.twitter.com/GbzB0YhB9v

4. In case anyone wanted to give Trump a “free pass” for doing or saying anything while under the influence, Minhaj informed us that he’s been sober this whole time.

He added, “Who is tweeting at 3 AM sober? Donald Trump because it’s 10 AM in Russia. Those are business hours.”

5. He expressed the confusion many have had in trying to understand why Ivanka Trump is still standing by her father, while letting us know that his dad is a stingy brown dad, like many of ours.

“We all love our parents. But we wouldn’t endorse them from president. If someone’s like hey, Hasan, should your dad be president of the United States? I’d be like, my dad? Najmi Minhaj? The guy who tries to return used underwear to Costco? No!”

6. Minhaj offered a thought-provoking explanation for why, despite everything the media’s done to highlight the shortcomings of Trump, his supporters still stand by him.

“And I realized something—maybe it’s because we’re living in this strange time where trust is more important than truth. And supporters of President Trump trust him. And I know journalists, you guys are definitely trying to do good work. I just think that a lot of people don’t trust you right now. And can you blame them? I mean, unlike Anderson Cooper’s bone structure, you guys have been far from perfect. Remember Election Night? That was your Steve Harvey Miss Universe moment. The look on your faces at 11 p.m. on Election Night, it was like walking into a Panera Bread and finding out your sixth grade teacher has a part time job in there. I was like, ‘what? Mr. Leddington? I guess you don’t have all the answers!’”

7. He went after multiple media outlets, but spent most of his time was spent on CNN, begging them to enable us to trust their expertise.

“You know you’re news, right? Come on! But every time I watch CNN, it feels like you’re assigning me homework. ‘Is Trump a Russian spy? I don’t know, you tell me! Tweet us @AC360.’ No, you tell me! I’m watching the news!”

8. But, because of the mistrust and shaky relationship that the media now has with the president and the public, the media must be on its best behavior. Minhaj deemed the press the new “minority” and introduced them to the responsibilities, challenges, and consequences that come with being a minority.

He struck a chord with all minorities when he continued, “And then when you actually manage to do great work, you get hit with the most condescending line in the English language: ‘Hey, you’re actually one of the good ones.’ Then you have to smile and say ‘thank you.’ Kind of sucks, doesn’t it?”

9. Despite his burns towards the press, Minhaj acknowledged the importance of their work and the freedom of speech that enables them to continue it, becoming deeply personal about his ability to stand on that stage.

.@HasanMinhaj: “This event is about celebrating the first amendment and free speech” #WHCD2017 pic.twitter.com/v3v6VDl8f0

Just hearing the phrase “Indian-American” on that platform gave me chills.

10. And finally, he empowered everyone to continue to exercise his or her right to free speech even in the face of Trump’s hypocrisy, all while presenting the all-too-relatable struggle of having an ethnic name that would undoubtedly get mixed up.

“But the president didn’t show up. Because Donald Trump doesn’t care about free speech. The man who tweets everything that enters his head refuses to acknowledge the amendment that allows him to do it. Think about it, it’s almost—what is it, 11? It’s 11 p.m. right now. In 4 hours, Donald Trump will be tweeting about how bad Nicki Minaj bombed at this dinner, and he’ll be doing it completely sober. And that’s his right. And I’m proud that all of us are here tonight to defend that right, even if the man in the White House never would.”

Minhaj’s full routine can be watched above trust us, it is well worth your time. His ability to maneuver so deftly between comedy and honesty speaks to his talent. It was refreshing to see such representation at the White House Correspondents’ Dinner. Hasan, we want you to know that we could not be prouder!

Saumya Bhutani is a graduate of Vassar College, where she majored in History and minored in Biology. She wrote her thesis on the relationship between beauty ideals and the changing roles of women in India in the late 1970s. Saumya is an aspiring physician but also considers herself a history aficionado and pop culture junkie.

In Conversation with ‘Surina & Mel’: Two Brown Girls on a Mission for Representation