Around June last year, I saw a call for submissions on Kajal Magazine’s Twitter profile. It was for the first print volume; the theme was mountains, rivers, and home. I submitted a poem about traveling through Varanasi by boat. It is the only time I have voiced that experience, and it is for an audience who knows how to hold it.

From Brown Girl contributor and now Kajal’s Editor-in-Chief and founder, Nadya Agrawal wanted artists and writers to think about what home meant to them. To Agrawal, mountains and rivers shape her sense of home and the Indian subcontinent—

“There are mountains at the top, rivers separating regions, and an ocean at the bottom.”

Kajal as a web publication was a place I visited to feel at home, to feel the intersections of the art and poetry I saw in my life and across the diaspora. It was a place to feel validated as much as it was to learn from South Asian perspectives I wasn’t hearing in my local communities, ones I thought to be heavily conforming. But as I kept on reading, I realized that many, if not most, of the narratives, revealed writers who felt similarly.

And the stories kept coming: ones of truth and rebellion, of art and why we need it, of distrust and how we embody it. In every story, I saw myself. In the coverage of Harnaam Kaur’s film, “F*** Me or Destroy Me,” in the critique of “La-La Land’s” Bollywood parallels, in a historical narrative about how my sexuality has been colonized out of me. 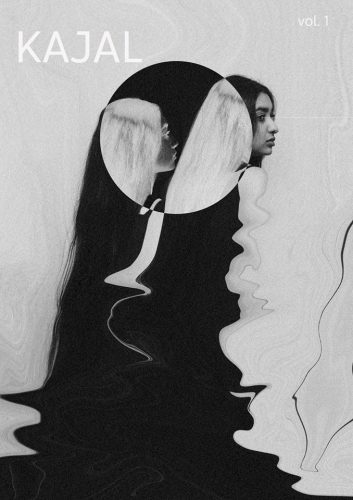 Now, Kajal pioneers as the first South Asian literary print magazine. The poetry, prose, photography, and art include diverse diasporic experiences. The volume showcases the rich nuances of South Asian experiences without the condition of being ethnically brown, including features from Tibetan identities.

The print volume is a tangible paragon for living in the sensuality, darkness, and joy that has always been ours to express and inhabit despite the danger it can impinge. A new print volume will come out every year. It is the elite, indie magazine that we can look forward to seeing in international bookstores and households.

It is over 70 pages. I want the magazine to feel heavy in my hands. I want to carry it around in the hopes of others asking me about it. I feel like I am in high school again when I had a blown-up vintage photo of Sadhana plastered on my binder and let my crush focus over my shoulder as I translated ghazals into Punjabi script. I was carving space.

The narratives in Kajal’s print volume gives me the comfortability to be that girl again. This time, I have the wisdom to protect my ways of knowing, parts of my identity taken from me by people who took an iron hold of my naivete, in and outside of diaspora. Kajal’s first print volume symbolizes my joyful second try, a rebuilding and a safety.

As a teen, I scoured the shelves of Barnes and Noble and found literary and art publications I believed in, like Hi-Fructose, Bitch and The Believer. I learned about Nina Simone and why I felt angry and sad all the time. I saw 1,000 colors on a page. My hunger for representation—to feel understood somewhere—found those images and stories. Now, Kajal’s print volume will remedy the erasure of South Asian narratives in the art-world. A girl who looks like me can begin to carry something she trusts in her hands.

You can order Kajal Vol. I here.

Jasleena Grewal is from Seattle, WA. Her beautiful Pacific Northwest home has taught her to see stars in cars, little amoebas in raindrop reflections against the quivering dashboard. Aside from what her parents have to say (about anything), she only lets the sky rule her moods.

‘Meat Came Between Me and My Man’ — U.K. Female Artists Share Food For Thought