Anuradha Roy on the Dark and Lyrical ‘Sleeping on Jupiter’ 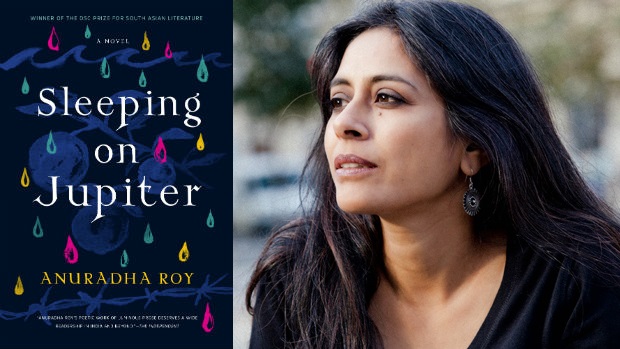 I can’t say I believe in that saying, “don’t judge a book by its cover.” To me, a book’s cover makes the experience of reading all the more compelling. Like my romantic relationships, the external has been as striking as the internal, and while those stories are for another post (or my therapist), a gravitation towards rich aesthetics seems to follow me around. When I first held Anuradha Roy’s, “Sleeping on Jupiter,” I was expecting some powder to line my fingers—the cover felt as smooth and sure as chalk.

This September, I was at an event at a local Seattle bookstore, The Elliott Bay Book Company, to see Roy talk about the book. I hadn’t read her work before, but I liked the sound of the title—dreamy and soft. I also felt it would be empowering to hear a writer who shared just an ounce of my identity speak. Before I sat down to listen, the only experience I had with the book was the title and the cover, already texturizing my perceptions of the words that lay beneath.

I wasn’t the only one taken by the beautiful cover. Others in the audience fawned over it; Roy told us she also designs book covers for Permanent Black, one of India’s leading book publishers. Just as well, Roy seems to understand the power of the brain’s visceral tugging in her architectural prose.

Winner of the DSC Prize for South Asian Literature and long listed for the 2015 Man Booker Prize, “Sleeping on Jupiter” is Roy’s third novel. The book follows the overlapping lives of visitors, residents, and transplants in a seaside temple town.

Roy’s themes are acutely propelling. Through the characters, the reader faces dialogues around faith, abuse, rape, and homosexuality. Each character reveals their tremendous complexities through their interactions with themselves and others. A devout temple guide, Badal, has a wry thought: “Ripping off the ungodly was somehow more satisfying, it made the world a better place.” A chaiwalla, Johnny Toppo, interacts with his cups, pots, and pans as if it is therapeutic, grounding, and banal all at once. And Suraj, who becomes interested in the protagonist Nomi, entwines intense affection with violent urges. The characters reflect a humanness we all share: holding contradictory emotions side by side and traversing the arising conflicts over our lifetimes.

As the event ended, I mustered up the courage to ask Roy a few questions for our Fast Five series, a request she seemed just as sparkly-eyed about as I did. I left with the book in my hands, and it never left my sight for the next month. And, even through the Seattle rain, the cover kept its gossamer integrity. After finishing the book, I followed up with Roy via email to build on some talking points I noted at the event. Her responses are as opulent as her professional prose.

1. At the Elliott Bay talk, you mentioned this book was different because it is darker than your other work, like “The Folded Earth” and “An Atlas of Impossible Longing.” Can you tell us more about that?

“‘Atlas’ is the story of lost homes and families set over three generations; “The Folded Earth” is about the fragility of the natural world and is told through the story of a woman rebuilding her life after she loses her husband. “Sleeping on Jupiter” has as its main character, a young woman excavating the past for fragments of her traumatic childhood. I suppose you might say that loss is a recurrent theme. And resilient, feisty women are recurrent characters in all three. The books are set in very different worlds, both geographically and in terms of time, and taken together they do reveal a gradual descent into violence and disintegration from the 1900s to the present day. “Sleeping on Jupiter,” set in contemporary times, is the darkest of the three because its world is bleak. Yet it is not an unforgiving world, it is shot through with comedy, love, hope.”

2. You mentioned that “people read [fiction] from where they are coming from.” Is there a way you hope that readers meet and experience the book’s characters and scenes?

“You know those T.S. Eliot lines, “That is not what I meant at all; That is not it, at all.” That is sometimes how it feels. Every writer hopes for readers who will ‘get it’ of course, so do I. What I want is for readers to be completely absorbed by the novel, by its world and characters and ideas, to be moved by it, to have it living in their minds for some time after they have read it.”

3. How do you construct and develop diverse character psychologies?

“I find these questions about method hard to answer. I suppose the characters come from a mixture of experience, intuition, research, and observation. I have to inhabit the world of the novel for a few years, get closer to the characters draft after draft. It feels like a process of unpeeling layers of wrapping paper away in each draft until I have the whole person clear and solid in front of me. I can’t tell why some of the characters come much easier than others.”

4. At the Elliott Bay talk, you mentioned you read a lot of Bhakti poetry and Ramunajan translations. How did this influence the book’s themes?

“One of the themes of “Jupiter” is religion. Every character in the book feels the impact of religion in one way or another. The whole oppressive, ritualistic, opportunistic edifice of formal religious practice via temples and priests is contrasted in the book with true spiritual fervor—which is what the Bhakti poets, such as Akka Mahadevi of the twelfth century exemplified. They were fierce rebels who loved God as they pleased, refusing to follow rules set down by religious institutions. The women bhakti poets turned away from domesticity and marriage, focused on their passion for God. I read translations of Bhakti poetry years ago, and I’ve always found them startling and brilliant.”

5. How did the title, “Sleeping on Jupiter”, come about?

“Every character in the book is looking for an alternate version of reality. That is what the title is meant to reflect. It is Badal [the temple guide], who articulates this need most clearly when he remembers his childhood fantasy of sleeping under Jupiter’s sky.”

Jasleena Grewal is from Seattle, WA. Her beautiful Pacific Northwest home has taught her to see stars in cars, little amoebas in raindrop reflections against the quivering dashboard. Aside from what her parents have to say (about anything), she only lets the sky rule her moods.

2018 South Asian Creative Summit: A Weekend of Learning and Collaborating