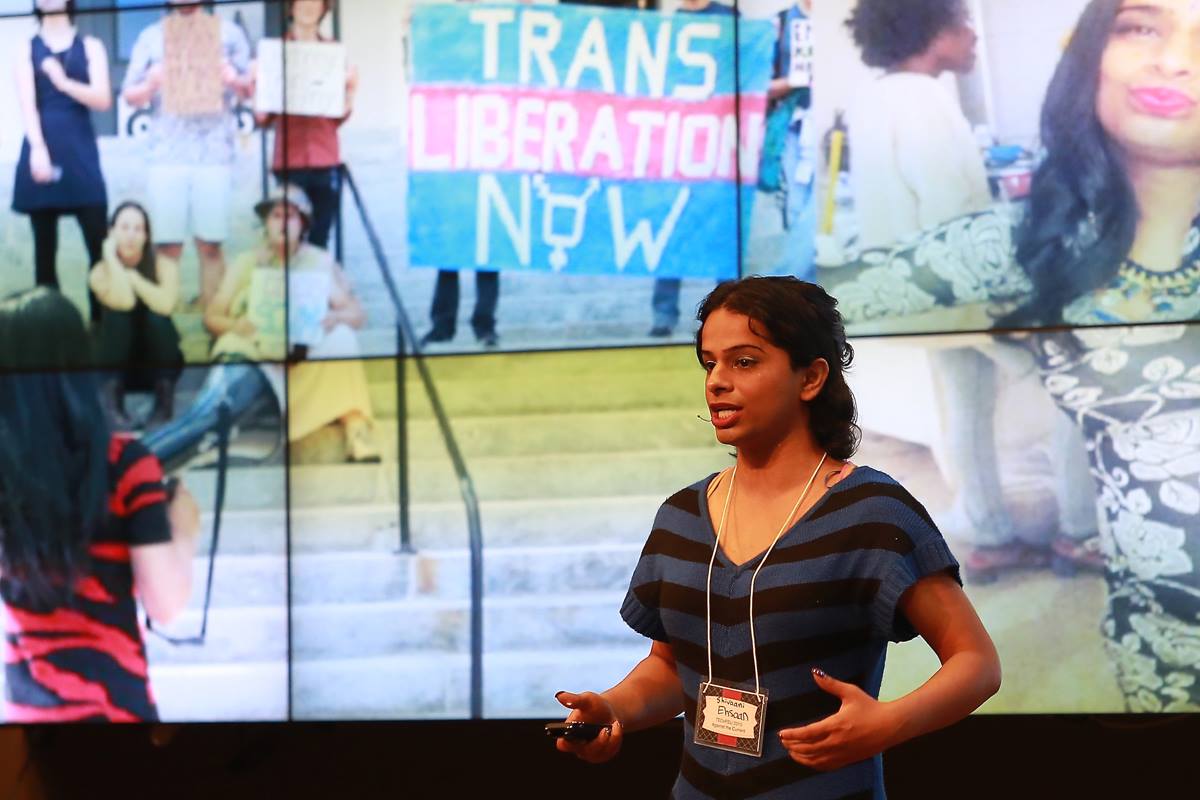 Meet December’s Brown Girl of the Month—Shivani Meenakshi Vijayalakshmi Ramanathan, a 22-year-old desi trans* woman of color, originally from Mumbai and now residing in Miami, FL. Currently, she is a graduate student pursuing a degree in public health with a focus in Health Promotion and Disease Prevention. Through her research, she hopes to educate medical providers to be better able to treat trans* patients as well as to promote patient driven policies that will allow trans* people to become their authentic selves without long and expensive bureaucratic processes. She is an activist in her community, working with students and community members to fight for transgender rights and racial justice. Presently, she works with local unions and progressive organizations by going door to door in local neighborhoods educating people on key progressive initiatives such as raising the minimum wage, fighting for the rights of the undocumented, and to hold police officers accountable.

“When I began my transition over a year ago, I faced the first hand the divisions between our parents’ generation, which believes in the traditionalist vision, and my generation’s more progressive vision. I still remember making the phone call to my mom informing her I had felt like a woman since I was four—and I would soon be starting Hormone Replacement Therapy. She cried on the phone for 30 minutes and said she would die that very day; that I was breaking the traditions of my family; and that I was just doing this to be rebellious. She also claimed that me dating a black woman, being an activist against racial justice, choosing political science over being a doctor or engineer, and my transition were all done simply to upset her and my dad.

Prior to that phone call, I had spent twenty years of my life as the star of the family. Whenever I was around the Indian-American community with my family or whenever we went to India to meet my extended family, they had built this image in their head of me as “the perfect Indian child.” They were impressed by my perfect grasp of the Tamil and Hindi languages and extensive knowledge of Bollywood and Indian classical music. Overall, they believed I maintained the traditionalist decorum of a good Indian boy—one that got good grades, didn’t party, didn’t date , and definitely not someone who was transgender.

However, on that April night in 2015 when I made that phone call to my mom, I went from the star of the family to someone who was to never be seen by anybody in the family or the community.

Later that summer, they took me to India, originally promising to take me to a surgeon who did gender reassignment surgeries—but really, they had tricked me into meeting with a religious conversion therapist in Chennai. This middle-aged man not only spoke about the wonderful leadership of Prime Minister Modi but also told me I could never be a woman and nothing good would ever happen in my life if I opposed the wishes of my parents. My dad later told me that if I went through with this, I would fail in school and nobody would marry me. My grandfather even offered to marry me off to a good Indian woman and hand over control of his small business to me if I made the decision to not transition.

Today, I am officially ten months into my taking my hormones. I not only passed my undergrad but was also accepted into a master’s program. I continue to be an activist in my community and managed to eventually get the reluctant support of my parents. I continue to fight today so the next generation of Indians don’t have to deal with what I went through—where desi youth no longer need to live the double life of pleasing their family and hiding their authentic selves. I strongly believe the next generation will have a more progressive consciousness to be able to support their child if they come out as LGBTQ+.

Over the years, I have successfully organized to block anti-trans bathroom bills in the state legislature, worked with community members to fight for a civilian review board who would have the authority to punish cops who engage in police brutality, and against the increased privatization of my university when my alma mater—Florida State—sought to place Gov. Scott’s right-hand man, John Thrasher, as the university’s president against the will of teachers and students.

I fight for change not just because it is important to overturn the massive inequalities we face today, but because I believe there is an important role I can play as a trans* woman and as an Indian. Today, as a progressive community, we are faced with the task of a rising white nationalist movement that has been galvanized by the candidacy of Donald Trump—a backwards movement that seeks to ban all Muslims, roll back the gains on trans* and queer rights, and make the lives of all minorities much more difficult.

[Read Related:  ‘Not All Trump Supporters Voted for Racist Reasons’ but Here’s What They Did Do]

In our mother country, India, fascism has already taken place. With the election of Narendra Modi, a far-right Hindu extremist party has taken power—one that has blocked LGBT rights, unleashed terror on Muslim communities, and repressed the protests of workers fighting against the privatization of their industries.

Our parents’ generation has bought into the far right politics of Modi as thousands of NRIs in the U.S. played a key role in Modi’s victory. As a trans* desi, I believe I can play a key role in the Indian community here to build a new era of progressive thought among my generation: one that supports the rights of the trans* and queer community; a new generation that calls for the unity of Muslim, Sikh, Christian, and Hindu Indians, a generation who rejects caste divisions and understands the importance of standing in solidarity with other marginalized minority communities.”

-With lots of hope for the future,

The political views and opinions expressed in this article are those of the author and do not necessarily reflect the views of Brown Girl Magazine but we are a platform that encourages open expression and dialogue for all.