I mean sure, as a South Asian woman walking the streets of L.A. I get compared to the top three players on a regular basis: Mindy, Aziz, and that guy from Slum Dog (his name is Dev Patel, but you know what I mean).

I appreciate those top three and what they’ve done for South Asian visibility to western audiences, but none of them are me. Part of me just wants to get this exercise over with and post a GIF of Liz Lemon eating “night cheese,” Tina Belcher looking at butts, and Lucy, from I Love Lucy, with her mouth stuffed with chocolate but it just feels wrong. It bothers me that the top three personalities I relate to aren’t women of color, and that’s definitely a vital part of my identity.

A recent University of Southern California study by the Institute for Diversity and Empowerment at Annenberg found that of the fictional content released by ten major media companies across platforms, there were twice as many males on screen as women. In addition, only 28.3 percent of that content featured underrepresented characters that spoke. Furthermore, at least half of all those platforms failed to portray one speaking or named Asian American on screen.

Sheesh, we can barely even get one. How is an underrepresented minority supposed to find three fictional characters that represent them? They need to create them.

We created The Fob and I—a web series released last year based on solving that very problem. The show, to put it plainly, is about two Indians that are different. We set about depicting South Asians as complex characters rooted in their identity and not in their stereotypes.

The Fob and I was named one of Indiewire’s top five web series picks of 2015, was featured on Public Radio International as a solution to Hollywood’s diversity problem and made the front page of NBC News as a series that “tackl[ed] the unspoken Hollywood edict that…discourages storytellers from constructing two leads of color.”

The show became a champion for diversity, and now a year after its release, we’re launching our second season. We haven’t solved the minority crisis in Hollywood, but I can say that today that I’ve got two fictional characters to put up on my Facebook that represent me. I just need your help to make that third.

[Read Related: As Mindy Kaling Join’s ‘Ocean Eight,’ we Imagine a Bollywood Do-Over for the Film]

Watch the first season Fob and I here.

Support The Fob and I’s second season by clicking follow or donating here.

Meenakshi Ramamurthy is a comedy writer/director from South Texas—that means she’s one of the few Indian people who can tell you where to get a good taco. For more about here, visit her site. 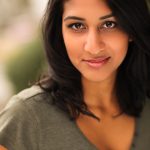 Shefali Deshay is a Los Angeles-based singer-songwriter and actress. She graduated from the University of Southern California with a degree in Political Science and a minor in Musical Theatre. She co-starred as “Sita” in the comedy web series, “The Fob and I,” which gained traction in the media as a relatable series highlighting two strong South Asian women. Shefali creates weekly videos on struggles related to work, love, family, and being Indian on her YouTube channel. You can also follow her on Instagram and Facebook.