“Have you been to Kit Kat Club?”

Samir asks as he sits leaning against the corner of this sleek and vintage bar in Kreuzberg. He wears a black t-shirt and his long hair in a bun, looking as much the Berlin musician our mutual friend described to me.

“Don’t go to the Kit Kat Club,” he says shaking his head. “I’ve been rejected four out of the six times I’ve gone. They want you to be wearing kinky shit under your coat.”

“I’ve never been into that whole scene in Berlin. I mean, I’m not a Muslim anymore, but I’m still Muslim enough not to want to get naked in a room full of strangers.”

“Exactly,” Samir nods. “I feel the same. There are some lines that you can’t cross.”

Samir is from Syria, I’m from America. We both grew up in religious communities and drifted from them during adolescence. In Damascus, Samir would slink away during prayer time to smoke with his friends. In Long Island, I would silently recite Linkin Park lyrics during the rakat instead of Arabic. I don’t meet enough people like Samir, enough people like myself. In the past, I shied away from my Muslim connections in order to catch up to the Western secular world. I’m no more religious now, but I’m reaching back to my roots. After all, 2016 is not the year to be alone as a Muslim.

“You’re sure about that?” Samir asks, hunched over as if he’s trying to hear right. “It wasn’t a terrorist attack?”

“It wasn’t. The kid in Munich was actually inspired by the Norway killer who killed 70 people for Christian reasons. He had an Iranian background but the murders are in no way related to any Muslim terrorists. Even the Munich police said that. Not that anyone cares.”

“Yeah. Nobody’s gonna care. You know, I was on the station one time,”

Samir looks to his side, viewing the rest of the candle-lit bar from his corner. The bartender also wears a man-bun, but has lighter skin and bluer eyes, and goes outside to smoke when he pleases. Behind me, at a table sits blonde people, drinking blonde beers.

“And I see a man who looks like a religious Muslim. And for a moment, I got scared that maybe this man would kill me, just because of what he was wearing.”

“I feel you. At my restaurant in New York, a Sikh guy went outside and left a backpack by the bar. My co-workers freaked out, which made me freak out, even though I knew he was Sikh.”

Samir leans his head against his hand.

In the days leading up to our meeting, the bleak stories of the city weighed heavy on me. By a shopping center in Mitte, I saw the name and lives of a couple who used to live there etched on the golden Stoplersteine by the curb. His name was Jakob Bergoffen. Her name was Felli Bergoffen. He fled to Prague in 1938. She fled to Prague in 1938. He then fled to France in 1942. She fled to France in 1942. He died in Auschwitz, August 31 1942. She died in Auschwitz, date unknown. They traveled so far to escape a populist politician with bad hair who blamed their country’s flaws on their religion, and it still wasn’t far enough.

Earlier, I visited Templehofer Feld, the airport-turned-park, which now temporarily houses refugees fleeing the conflict in Syria. The park offered bike rides on the runway and mini-golf on fields built from reused materials. The cold air howled as the rain clouds inched over me. But I couldn’t describe the scene inside the airport where security blocked the entrances.

I knew that behind the thin window slits of the facade, over 1300 refugees were crammed into bunk beds — but what sounds or smells they had to live with, I didn’t know. I pressed my nose against the white fence, unable to connect any further with those stuck in that building than my thoughts would take me.

Samir left Damascus after the conflict under Assad’s regime flared up in the region. He fled to Turkey, then to Greece, and then to Berlin. His first place of asylum was an unused office room he shared with three others and he was given a hundred euro a month stipend. In the past year, he’s done a series of odd-jobs, including working at the refugee camp in Templehof. He asks me,

“Could you imagine having to live in an airport?”

I shake my head.

We move outside to the trash-cluttered Skalitzer Strasse, where Samir munches on his döner, Salat komplett, as I tell him about Donald Trump’s business practices.

“In one of his casinos, he had a rule that his black employees had to be in the back when he and his wife came in. He said ‘black people have a trait of being lazy.’”

Samir moves the kebab from his face.

“Someone wrote a book with a quote of him saying that.”

“He actually thinks that? And it’s in a book? No.”

“Someone actually ghost-wrote a memoir for Donald Trump — he said writing it was the worst mistake of his life.”

Samir chews his kebab, eyes looking straight ahead past the noise at Kottbusser Tor.

“You know, we have eight skin colors in Syria. Some are white, some are black. But no one is better. We have a saying. It doesn’t matter what skin you have or religion you are — everyone is full of shit.”

[Read More: My Pakistani-Burmese-Scottish Experience: Understanding Who I Really Am] 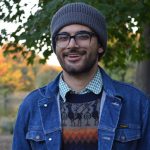 Saleem Nasir Gondal is based in New York and has been published in Things Created by People, No Home Journal and The Good Men Project. You can follow him at his blog, The Mellow Dramatist, which covers topics including gentrification, race, and urban life. He is a graduate of the Department of Dramatic Writing at NYU Tisch. You can also follow him on Instagram and Twitter, @gondalafilms.