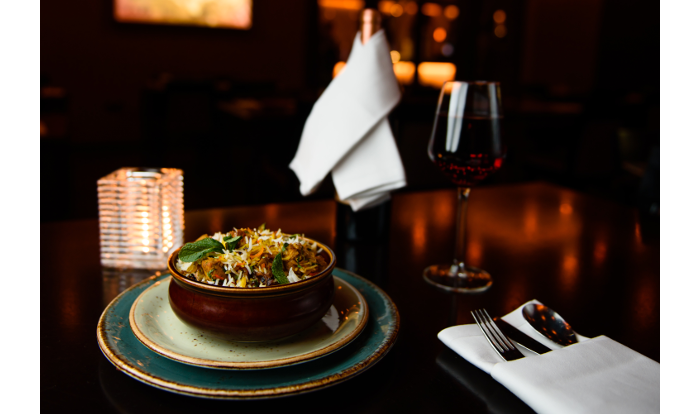 When it comes to Indian food, wine pairings seem to be a rather unnecessary conversation. Beer, yes. Lassis, hell yes! But wine?

The age-old assumption was that the masalas found in Indian food were far too overpowering for the subtle notes of wine—but this is not so! Not anymore, at least. As the popularity of Indian food now extends well beyond India, wine aficionados, foodies, and chefs have a vested interest in answering the question, “what wines pair well with Indian food?”

As with any food and drink, it comes down to personal preference. We invite you to experiment with what excites your own palate—but we offer this as an overview and an approachable way to start your experimentations. We did a good bit of research to summarize what the professionals say so you do not have to wade through the troves of discussion; you can get started on the fun part: drinking wine with tonight’s dinner! Ready?

Right off the bat, we will say that German Riesling appears to be the most popular choice amongst chefs as a suitable pairing for Indian food. Why? The slight sweetness does not negate the spice blends found in many Indian dishes. Likewise, the warm spices such as cloves, cinnamon, and fennel that are often found in Indian food pair nicely with the crisp sweetness of a Riesling.

“Wines with a touch of residual sugar are a great foil to the spiciness” prominent sommelier, Jason Wagner, said. “Off-Dry Rieslings and Gewurztraminers can be particularly rewarding. A demi-sec sparkling wine also works really well. The big thing to avoid with spicy food is tannin and oak. Put away those big Napa Cabs when it’s time for Indian food.”

Other popular contenders and close runners-up are Pinot Gris and Rosé. These are noted amongst sommeliers as having aromatics that complement the complexity of spices found in many popular Indian dishes. Sauvignon Blanc grapes, such as the Sancerre, were noted as cutting the saltiness in many dishes as well as having the ability to cut through fried foods because of its high acidity. I’m thinking, Sancerre and samosas anyone?

White wines alone are not destined to share the table with Indian food. Red wine can be enjoyed as well, but perhaps with a little more deliberation. The popular rule of thumb is often reduced to a “red wine with meat, white wine with fish” philosophy. However, sommeliers will tell you that this is too reductive and paints the nuances of wine with too broad a stroke. This is even more so when it comes to Indian food and wine—it is too simplistic of an assumption that red wines will pair well with meaty dishes such as vindaloos or rogan josh.

Rather than looking only at the meat, consider other ingredients and mouthfeels as well: Is the dish creamy? What is the predominant spice in the dish? What is the range of heat? Sommeliers also recommend reds that have fruity aromatics in them which go well with masalas and advise staying away from oakier, heavy-bodied red wines. Highly tannic wines such as Cabernet Sauvignon and Barolo are no-no’s.

“Fiery dishes beg for a wine to balance the heat, not add to it. You also want to stay away from anything too high in alcohol, because it intensifies the spice” wine expert and food writer, Kerry Newberry, of Culinate.com advises. “Avoid highly tannic wines (like a bold Barolo or a heavy Cabernet Sauvignon), which can add a bitter taste to highly flavorful, pungent dishes.”

Other professionals recommend using red wines which can be chilled, citing the temperature to have a cooling effect on the palate (which can be appreciated when taking on the heat of Indian dishes.) Examples of red wines that can be chilled and can pleasantly stand up to masalas are Gamay and Dolcetto.

Finally, others recommend neither white nor red wine, but the crisp bubbliness of champagne! And isn’t that something to consider, to celebrate Indian food with such a celebratory beverage? We think so!

Soni Satpathy-Singh is a recipe writer and developer who resides in Manhattan. She is either always cooking or eating be it for work or simply because she loves to! She is working on her own cookbook and also recently created “Sketchy Desi” which provides daily humor, greeting cards, and apparel that celebrate brown culture. To see more of Sketchy Desi’s work, visit www.facebook.com/sketchydesi/ or stay tuned to upcoming posts on Brown Girl Magazine.