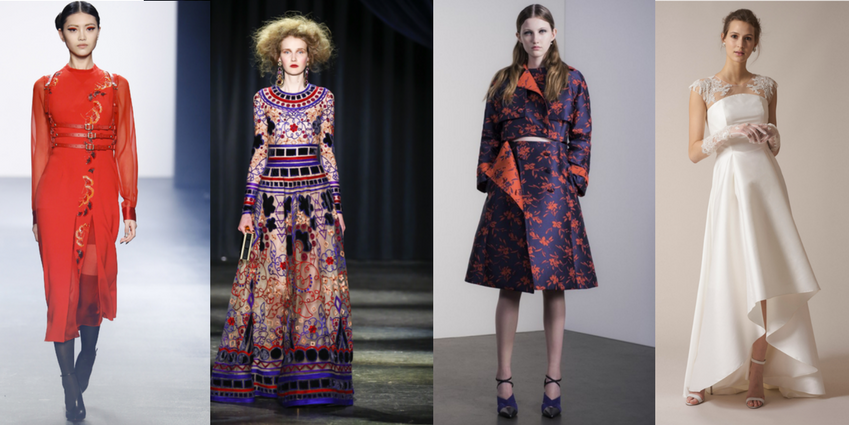 There is amazing representation of South Asian excellence in a ton of different fields — medicine, engineering, tech, and athletics to name a few. But one of the things South Asia is best known for is our gorgeous clothing, silky to the touch in rich colors and adorned with mirrors and gems. And this fall at New York Fashion Week, some of our very best — from South Asia and elsewhere — brought South Asian representation to the fashion world. A fashion love story, Sachin and Babi Ahluwalia met studying at FIT, got married, and launched a business. They still run ANK International, a creative resource for embroidery and design that is sought after by many big-name designers, and are known for their rich fabrics and intricate designs. Their collection for this NYFW has been recommended by Fashion Week Online for their “Bold, beautiful, slightly futuristic looks, unerringly cut.”

Naeem Khan is an Indian-American designer whose designs have been featured on icons like Beyonce, Penelope Cruz, Jennifer Lopez, and Taylor Swift. Not to mention First Lady Michelle Obama, who has worn his dresses on many different occasions since 2009. He comes from a family of designers, with a father and grandfather who both designed clothing worn by royal families in India, elevating his eye for fashion. Khan moved to the U.S. in 1978 as an apprentice for the designer Halston, and launched his eponymous collection in 2003. Since then, his designs have been sold at stores including Bergdorf Goodman, Saks Fifth Avenue and Neiman Marcus. A Singapore-born Nepali designer, Gurung began his fashion career as an apprentice for Manish Arora while he was studying at New Delhi’s National Institute of Fashion Technology. He then moved to New York City, working with designers like Donna Karan and Cynthia Rowley, and launched his own collection, PRABAL GURUNG, during New York Fashion Week in February 2009. His designs have been worn by dozens of influential women including Oprah Winfrey, Kate Middleton, and Michelle Obama, as well as Bollywood actresses like Deepika Padukone, Priyanka Chopra, and Katrina Kaif.

Born and raised in Odisha and inspired by his Indian roots, Bibhu Mohapatra is known for the striking colors and lavish fabrics he uses. After moving to the US, he attended FIT in New York and landed a job as Design Director for J. Mendel. Since then, he’s been on his own with his eponymous label, and launched his first collection during New York Fashion Week in 2009. His collections are sold by several high-end department stores, and his designs have been worn by many celebrities and eminent women.

A Virtual New York Fashion Week: the Shows Must go On

Not So Fair, But Oh So Lovely

The Banglez Evolution: Introducing Tenasãti, an Embodiment of Art, Aesthetic and Spirit in the Face of Challenge and Growth