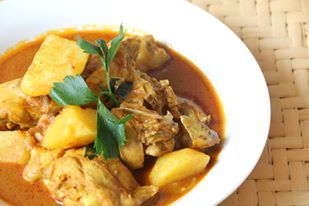 Many years ago, I found myself in a relationship and then a series of breakups with one particular man. Even a Bollywood flick would be jealous meandering and convoluted plot lines. Recently, it appears many BGs have been going through similar heartache, so I thought it was time to share this old blog post from my archives.

Apparently, there’s an epidemic and I’m offering you an antidote by way of chicken curry! If my western counterparts need chicken soup for the soul, then BGs, chicken tarkari (curry) complete with aloo (potatoes) and savory, spiced jhola (gravy) may just be your new go-to soul food!

Surviving a breakup is never easy. Different people have different coping mechanisms. After one particularly Earth-shattering breakup, my recovery went like this: I sang along with Anna Kendrick’s rendition of You’re gonna miss me when I’m gone into my hairbrush in the privacy of my bedroom about kabazillion times. I spent hours bending my sister’s ears. I had my closest friends rally around me and we deciphered the failed relationship like it was the Da Vinci Code. I re-read Melissa Bank’s “The Girls’ Guide to Hunting to Fishing,” always my go-to book when suffering from relationship woes. I don’t know why. It serves as the literary equivalent of cookie dough, something I ceremoniously consume only after breakups for comfort.

In short, I went through the steps needed to purge myself of the woes and blues afflicting the heart. However, as the days went on and I gained insight and support, the one thing I couldn’t seem to retrieve was my appetite. Break my heart. Squash my dreams. But steal my appetite? Oh hellz no!

And then it happened. The post-apocalyptic conversation with THE EX that sets a woman straight. I’m listening to him give me his version of why and how things went wrong. But all I really heard was bok bok bok bok. Chicken, bok bok bok. The conversation drove home a very potent realization: he would always be too cowardly when it came to taking responsibility for his feelings and actions. Sure, he was manly in many ways. But he was pure chicken in the ways that mattered most.

After talking to him, I felt the peace to love and let go. I begrudgingly admitted to myself that I had been dating a chicken and that I had enabled his chickenosity (that’s not a real word until now, folks) because it was easier. Yes. I had allowed myself to engage in a 10 month love affair with poultry.

Realizing this gave me my I AM WOMAN, hear me ROAR moment. And then I realized, no, the roaring was my belly. I was finally hungry! The break-up had caused me to not eat for weeks. Okay, maybe it was one week. But that’s like doggy years for me. I was craving comfort food. I needed to make my Bou’s (“mother” in Odiya) recipe and fill myself up, literally, with nothing but goodness.

[Read Related: I Like my Eggs Curried, Not Fertilized]

With appetite back in tow and the desire to return to the kitchen and cook up some comfort, I had another epiphany, one that wasn’t as palatable as Bou’s tarkari. It dawned on me that he wasn’t the only one who was a chicken. I had been one, too. I knew during many points of our relationship that some things just didn’t add up. I always had gnawing feelings that we were trying to mold one another into people we weren’t at the present and possibly may never be. There were certain expectations that I had that I never articulated out loud simply because I didn’t want to be deemed high-maintenance or high-strung; those labels often slapped on a woman when she unabashedly verbalizes her wants and needs in a relationship. But what was I so scared of? Another failed relationship? Of being disappointed in someone I loved or even worse, of his possible disappointment in me? Bok bok bok bok bok.

Now come closer to your computer screen and have this nugget of wisdom seared in your cranium, men and women alike. This took some months for me to get and you’re getting this for free; repeat after me, concerning chicken:

YA DON’T DATE, YA MARINATE!

DON’T BE A CHICKEN. Cook some chicken!

I’m sharing Bou’s chicken tarkari recipe with you. Cook this. Eat this. Take the time to marinate your chicken. Take the time to make the jeera masala paste. Making everything from scratch makes a difference. The bursts of flavor will slap the stupid out from you. It’s not the quickest curry recipe, but it’s worth it. All the good stuff takes a little time though it may take you a ‘coupla tries to get it right.

I don’t even know if we’re talking about tarkari anymore. But I will say this, fill yourself up with all kinds of love and comfort so you can go forth and tell your man or tell your woman, hey, this is me, take me or leave me as I am! And if you get left for saying so, is that so bad in the grand scheme of things?

Place all the ingredients in blender. Blend until paste consistency forms. Transfer paste to a jar or container and store in the refrigerator if not using immediately. To maintain the integrity, do not refrigerate and use longer than 1 week; at most, you can stretch it out for 10 days. You can keep it in the freezer for up to 3 months.

Combine all ingredients of chicken marinade in a mixing bowl. Marinate for at least 2 hours up to 24 hours.

Add onions and turmeric and cook for 3 minutes. Reduce heat to medium. Add jeera masala paste and stir to mix.

Add potatoes to pot. Stir. Cook for 3 to 4 minutes.

Add water or stock to pot. Bring to a boil, cover, and reduce heat to medium-high. Simmer for 10 to 12 minutes.

Add garam masala powder and stir to combine. Reduce heat to medium-low without cover. Continue simmering for another 5 minutes.

5 Chai and Whiskey Cocktails to Try the Next Time You Sit Down for Tea!

Why Beyonce and her ‘Lemonade’ are Unbelievably Unreal

6 Warming Dishes in Time for Lohri

How you should (and shouldn’t) talk to an adoptee

Shayoon Mendeluk: Story of a Brown Woman Who Did Everything She Was Told Not to Do

Religion is Not the Only Way: This Ramadan, Let’s Consider Those with Mental Illnesses