As another Ramadan comes to an end, I am content and grateful that I have been blessed enough to be here, and to have experienced another holy month of worship, repentance, and knowledge.

And while there were certain elements of this Ramadan that were similar to others of the past, this Ramadan has taught me more than any that has preceded it.

Ramadan began on a somewhat tumultuous note with the tragic shooting in Orlando, Florida. When I first heard about the incident, I found myself praying that the shooter was not Muslim. But, within hours, Omar Mateen’s face, beliefs, and his sexual orientation were splattered all over my television and computer.

I attempted to avoid all the negative feelings that were on the tip of my tongue. Here I was, abstaining from listening to the radio, limiting my television (I couldn’t refrain from “Game of Thrones” because, come on, spoilers everywhere), making more frequent trips to the mosque because the most beautiful time of the Muslim year was finally here—and yet, I didn’t have the peace I normally had.

But, the hardest hitting event for my family and me, was the ISIS attack in Dhaka, Bangladesh, as this was the city both my parents grew up in.

This Ramadan, I found solace on my prayer mat, Nouman Ali Khan’s tafsir (interpretation) of the Chapter called “Al-Baqarah” (The Cow), and frequent trips to my local mosque. As I read about tragedies over the Internet, I also saw some through my own eyes.

In our Houston community, we consecutively lost a number of young Muslim brothers and sisters ranging from the ages 17 to 22 from different causes. I attended the janazas (funeral prayers) for these young adults who left their mourning families, friends, and fellow Muslims behind. I never knew any of the deceased, but as I stood there, I shed tears for these strangers who were granted the blessing to leave this world in this blessed month.

[Read Related: An Open Letter to Ramadan From the Perspective of Three Muslim-Americans]

As the month comes to an end, and we celebrate Eid, the tragedies of this month still continue to loom large in my heart. I try to see the beauty in it all despite being difficult at times. This Eid will be different than others, and the focus is no longer on the Eid outfit and accessories, nor the endless parties.

This Eid, I am thankful for being given another opportunity to spend Eid with my family, something which I had taken for granted before this overwhelming and eye-opening Ramadan.

This is my first Ramadan I attempted to fast after a gap of a few years of not doing it.

I am not the most religious person you’ll meet, I identify more with the word “spiritual.” Ramadan, for me, has been a time to strengthen that spiritual connection not only with God but myself.

I became aware of the importance of human connection, vulnerability and expressing emotion to others no matter what.

Being raised in a culture where emotional expression is shunned  and having faced some life experiences which built a wall within myself from myself; I found myself internally silenced.

I became submissive, without an opinion of my own, unhappy, guarded and unable to express myself verbally.

I realized during this month how important it is to just say what I need to say, without second-guessing those emotional outbursts as long as they come from a place of love.

This month I’ve reconnected, and made amends with those who support my journey, and released those who did not with love. I hope to continue to build on many of these lessons. I hope your Ramadan was one of personal growth, gratitude, and nurturing relationships as well. I look forward to my next Ramadan. 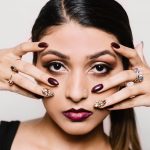 Jasmin Rahman is Brown Girl Magazine’s in-house make-up artist. She works as a freelance makeup artist in New York. She graduated from Rowan University with a masters degree in School Counseling and Advanced Certification in Clinical Mental Health Counseling. Rahman is passionate about encouraging self-love and enhancing natural beauty in every person she works with.

How to Have Your Healthiest Ramadan Ever

How to Prepare for Ramadan: 3 Steps I am Planning to Take This Year