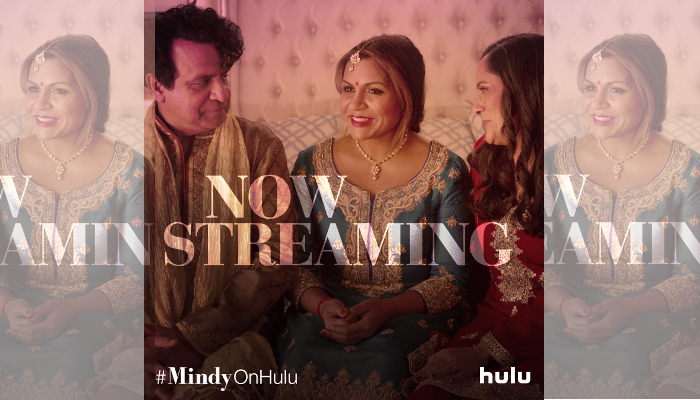 The highly lauded Mindy Kaling’s “The Mindy Project” never fails to give us major feels because Mindy Lahiri gets us like no one else does. The latest episode of the Hulu series, titled “Bernardo and Anita,” touches upon an array of dilemmas familiar to South Asian Americans who are struggling with balancing our culture while aiming to simultaneously osmose into mainstream America.

Mindy is seen dating a fellow Indian-American Neel (played by Kristian Kordula) who does not see a future with Mindy because she’s a “coconut—brown on the outside and white on the inside.” In shock, Mindy sets out to prove that she can be just as Indian as the next person by mingling with South Asians and familiarizing herself (and her son Leo) with Indian rituals—unbeknownst to her.

The episode shows Mindy as an even more accessible character, as she tries to figure out why those around her identify her more as white, and less as brown. Up until today, Mindy was more or less seen as a culturally ambiguous character, since the show does not aim to constantly allude to her Indian heritage. Mindy’s character is a normal woman, dealing with normal things but in a hilarious way.

She stands shoulder to shoulder with her white colleagues and friends whilst making cracks at her own figure, love life and obsession for bear claws. The introduction of Neel’s character is a juxtaposition of someone who is deeply rooted in his Indian culture and chooses to identify and amalgamate with fellow Indians. This leads Mindy to ponder on her own upbringing as she continues to question why her Indian background is obscure and scarce in her own life.

The episode leaves no stones unturned as it delves into the topic of assimilation of immigrants—how much is too much assimilation? Is there such a thing as a perfect balance? We live in a world where we are caught between the ideals and teachings of our parents on one end and the dominant American culture on the other. If you’re holding on too tight to your South Asian-ness, you’re called a fob or too Americanized if you’re living on the other side of the spectrum.

Neel brings up an interesting point—the idea that exceeding a certain level of assimilation is received with a negative connotation by the dominant South Asian community.

Raising inter-faith children, the stigma of live-in relationships, and of course, the all-omniscient and overly intrusive South Asian parents were all canvassed tastefully as “The Mindy Project” suggests prevalent elements experienced by the first generation South Asian community. It’s a comforting to know Kaling understands what we go through as a populace and has chosen to enlighten her broader audience about it through her show.

In a 23-minute episode, “The Mindy Project” portrayed the many types of South Asian Americans we encounter in our daily lives. We have those who are determined to immerse themselves in their heritage by prioritizing to make it a dominant element in their lives (like Neel), and we also have those who give ancestral traditions and cultures the backseat while allowing the dispersion of more facets of the American culture.

However, important to note—neither one of these clusters is right or wrong. We choose to be who we are and our self-actualizations are meant to be unique from one another. We all personally know tons of people who fall into either one of these categories, in addition to many who find themselves somewhere between the two divisions. The integral takeaway is the realization that the grouping we relate to does not make us any more superior or inferior than others.