As an American-born Indian woman, there are certain stereotypes I grew accustomed to hearing:

“You must be really smart,”

“You will probably become a lawyer, doctor, or engineer,”

And, the litany goes on.

I, however, did not come from a traditional Indian background. My mother was a single working mother, a doctor herself, and I was an only child. I grew up encouraged to pursue any area of interest—not just the conventional ones.

Even though we were not the cookie-cutter Indian family, there was still a stern disciplinary tone to my mother’s attitude that was quite traditional. I strived for good grades and a diverse academic background that would make me college worthy.

But seeing how hard my mother worked initially turned me away from medicine. I could not associate medicine with having a family life and I wanted everything that I did not grow up with. So, I decided to go into accounting instead and excelled at my career as a public accountant.

Yet, something was missing.

There was a desire that felt unfulfilled. I took some time to think through and dug deeper about my passion and my calling and decided it was time for a change. After two years of working as an accountant, I found that missing puzzle piece.

I started naturally veering towards the medical field. I noticed I had more interest in helping a friend work through her illness and diagnosis than in my accounting career.

I discussed my possible move into another field with my mother and close girlfriends. There were so many pros and cons to weigh: How will I support myself through my return to school? How would it be to attend college and then graduate college as someone in her late-20s? Would I miss important events in my family’s lives while possibly living out of U.S.? Could I cope without a steady paycheck and regressing into further school debt?

After much thought, I knew I would regret it if I did not take this dive.

I set my eyes on Ross University, in Dominica, full of trepidation and excitement at the thought of my new calling. Ross University was not my first choice mainly for the fact that it was not in the USA. I was hesitant to be so far away from my family and friends at this stage in my life when they needed me much more.

From the moment I stepped on campus, I knew Ross was the perfect place for me. I knew I would not be alone at Ross, in that there would be other “second career-ers” or those who took the nontraditional route like me to get into medicine.  Ross gave me the ability to truly learn the art of medicine, not just for the sake of passing an exam, but to treat my patients with care and with a holistic approach.

I still remember the rush I felt when I filled out my first HPI, a medical abbreviation for putting together a patient’s ‘history of present illness,’ and examined my first patient. It was nothing like I had felt when I was working as an accountant.

I grew closer to an existing friend while in medical school who would later become my husband. I began my epic—and by no means conventional—journey in New York, where I did all my premedical training, routed through Dominica, Chicago, and back to New York for clinical rotations and residency, and finally settled down to start my practice and family.

And now, seven years later, as a licensed Family Medicine physician and hundreds of patients later, I no longer feel lost. The journey, no matter the hills or valleys it takes you through, is truly validated by the feeling of knowing you have arrived where you are meant to be. I have my completed puzzle and it is a beautiful picture.

As a non-traditional student, I now feel a sense of peace with my choices and my path. 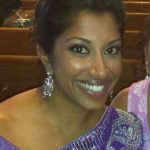 Dr. Anita Mannancheril was born in Chicago, Illinois and raised primarily in New York. She has her B.A. in Public Accounting and received her M.D. from Ross University School of Medicine in Dominica. She completed a residency in Family Medicine at Ellis Medicine Family Practice in Schenectady, New York. She is highly involved and motivated in the fields of women’s health and global health. She is married to Chris Thomas, also a graduate of Ross University, who is finishing his residency in Physical Medicine and Rehabilitation. She loves to travel and cook and is known as one of the most compassionate and energetic people by her friends.