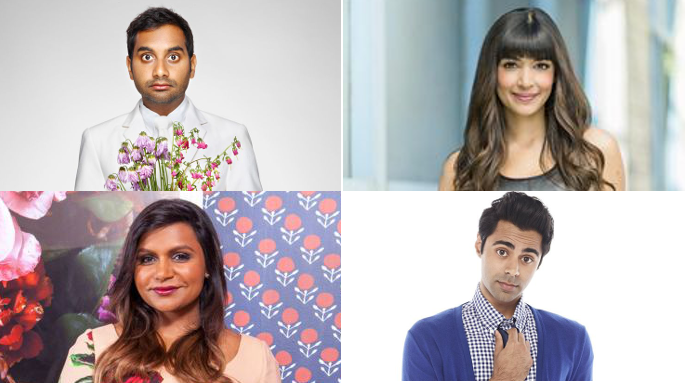 We all know that Priyanka Chopra is starring on ABC’s new hit series “Quantico”—the ads bombard us all over television, and on posters and billboards everywhere. Thankfully, her role is gaining a lot of attention for South Asians in the media.

Credit where credit is due, “Quantico’s” creator, Joshua Safran, and writers deserve praise for creating and writing a character that is layered, complicated, sexual, emotional and far removed from the stereotypes in which we normally see South Asian characters, especially on television.

But what about the many other South Asian actors that appear on television regularly?

While there may not be a South Asian character on every show, or even on a majority of shows at the moment, we can still point to the television and be proud that a change is coming, slowly but surely. Diversity in the media is starting to improve, albeit at a rather glacial pace when it comes to the Asian and South Asian community.

So, for now, let’s celebrate the South Asian actors in current television series and those who are premiering on our small screens soon!

We have to start with the obvious number one here. Mindy Kaling has not only been consistently appearing on our TV screens for several years with “The Mindy Project” and “The Office,” she is also a supremely talented writer and director. I mean, she’s the first South Asian woman to have created her own series, now on Hulu.

Have you watched “Master of None” yet? If the answer is no, go do so immediately. Ansari has gone from an incredible role on “Parks and Recreation” to creating, writing, directing and starring in his own Netflix series that does not shy away from real, relatable issues, but does show them in a different light through humor, and a great balance of strength and vulnerability.

Not only has Ravi Patel quickly emerged in the last year as a hilarious actor with his role on “Grandfathered,” he also appears in an important episode of “Master of None” with Aziz Ansari, and he co-directed a documentary about his love life and family entitled “Meet The Patels.” That documentary is now getting some great Oscar buzz, and rightfully so. It’s a brilliant doc that needs as much attention as possible.

Ritesh Rajan and “Stitchers” might both be slightly unfamiliar names, but they shouldn’t be. Rajan appears on this science-fiction-esque series on ABC Family (soon to be entitled ABC Freeform). Rajan plays the communications expert in a lab that allows the opportunity for the main character Kirsten to “stitch” into the minds of those who have recently passed to access their memories and solve their potential murder.

For anyone who has been living under a rock for last few years, Kunal Nayyar is one of the greatest joys of CBS’ megahit series “The Big Bang Theory.” While the comedy on the show regarding Nayyar’s character Raj can be a bit too stereotypical at times, Nayyar finds a way to rise above the tackiness and still give us an endearing, funny character.

Without Cece, “New Girl” just wouldn’t be what it is today—that is a fact. Despite the female-skewed title, the series is already stacked with so many male characters. But what makes Cece so invaluable is just how much she balances the main character, Jess, as well as her adorable, ridiculous romance with Schmidt.

Kumail Nanjiani’s Dinesh is the sarcastic realistic yet somehow still the naive and out-of-his-depth friend that everyone should have. He’s a staple to the “Silicon Valley” team, and the show would certainly be lacking without his hilarious bickering with Gilfoyle.

The series has yet to begin, but expect this TV adaptation of Lev Grossman’s book series to be epically cool. Arjun Gupta is no stranger to TV. He was a recurring star on Showtime’s “Nurse Jackie” and he appeared in the pilot for the CBS series “Limitless.” He even has other great credits onscreen and onstage. The series follows a group of young magicians as they attend Brakebills, a school designed to help hone their talents. Gupta plays Penny, a rebellious, angry young magician who is made even more infuriating, thanks to his immense talent.

Ramamurthy reclaims his rightful place in the “Heroes” canon by returning to his role as Mohinder Suresh in the mini-series. He might not be a regular cast member, but he appears in the most crucial of moments, especially considering Mohinder might be one of the reasons for the events of “Heroes Reborn” to begin in the first place.

It’s best not to explain whom exactly “Lost” star Naveen Andrews or “Best Exotic Marigold Hotel” star Tina Desai play in the Wachowski siblings’ Netflix series “Sense8.” Just watch the trailer for the show and allow it to take you to incredible, fascinating places. And along the way, see how many other South Asian actors you can spot!

For a TV series about doctors to not include a South Asian doctor in its main cast might seem like a show trying not to be stereotypical—but, in fact, it’s actually pretty surprise considering how many South Asians in the country do attend medical school. Thankfully “Code Black” features two doctors of South Asian descent, but what it does do to break stereotypes is cast these two actors in roles that are far beyond the typical South Asian doctor role. Jaffrey plays the ER attending physician Neal Hudson while Chandra plays Malaya Pineda, a first-year resident. Both happen to be more than just South Asian characters trying to be doctors—they are layered and exceptionally interesting.

The post-Jon Stewart “Daily Show” has some great new talent on its correspondent list, but none more so than Hasan Minhaj, who also recently debuted a great one-man play Off-Broadway, “Homecoming King.”

Gavankar’s character on “Mysteries of Laura” is tough, smart, sexy and beyond exciting to watch. She elevates the show every single minute she’s on the screen.

14. Karan Soni — “Other Space”
Current Status: Season 1 now airing on Yahoo! Stream
Never heard of Karan Soni’s new series “Other Space”? The first season premiered on Yahoo! online earlier this year and the creative mind behind the series is none other than “Freaks and Geeks” and “Bridesmaids” genius Paul Feig. If that doesn’t tell you how good it is, nothing can.

Funny name, funnier show. Rizwan Manji is probably known best for the short-lived NBC series “Outsourced,” as well as every other TV series on the planet, but he really outdoes himself on this show as Raj. The role is recurring but doesn’t mean he’s not memorable.

Playing analyst Vikram Singh, established actor Sunkrish Bala gets some great moments with Kate Beckett on Season 8 of “Castle.” Here’s hoping we see a lot more of Bala as the season continues to unfold.

Thank goodness for Comedy Central. The network has provided yet another South Asian voice on the late-night TV sphere with Shenaz Treasury. Sure she may not always have the greatest insight for every single topic that is discussed on the “Nightly Show,” but she is funny, smart, sweet and works extremely hard to get her important voice across on the issues that matter most.

This multi-ethnic actress has appeared in a multitude of series in the last few years alone. From the trailers of her new show on FOX, it seems pretty clear that she will be the most memorable and exciting character in Cooper Barrett’s life.

Just try to deny David’s talent and badassery after watching the first season of “Galavant.” It’s impossible—she’s the best.

While he may just play the friend of a prince on “The Royals” or the friend of a girl with a robot on “Humans,” Manpreet Bachu’s characters provide support and relief in the form of comedy, loyalty, and many complicated emotions. This British-born actor is definitely going places soon enough.