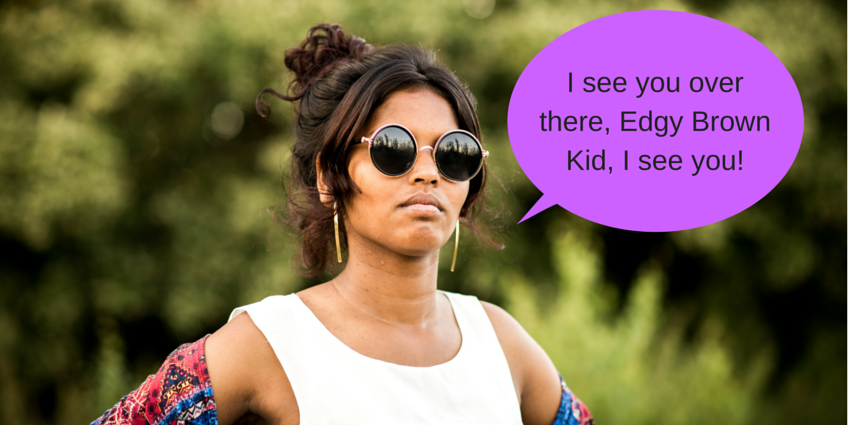 There’s a game I used to play at desi dinner parties, it’s called Battle of the Edgy Brown Kids. As parents mingled and children expertly avoided questions about future career goals, I would step back and survey the room. I would watch the Aunty who insists on taking too many photos that you will never see and the uncle who talks too loudly about politics in the Middle East.

But the real objective of the game was to spot the other twenty-something standing in a corner across the room. The one forced to attend by a parent’s ultimatum, who is trying hard not to cringe at the lyrics of the Bollywood item song playing in the background. After a few failed attempts of trying to explain their non-traditional career path—translation: not medicine, law, or engineering—to a few Aunties, they would retreat back to a table waiting for dinner to be served and with it a much-welcome exit.

Now, the actual battle consisted of exchanging a series of awkward glances and, in intense situations, passive-aggressive small talk to size up how much we rejected traditional desi lifestyles. Real or imagined, I always felt a certain amount of competition between these individuals and myself. Not out of spite, but rather out of similarity. Despite our common alternative interests and shared feeling of being stifled in desi spaces, these random dinner parties were the only times where our paths would cross.

In our small community, there seemed to be only room for one edgy brown kid. And I was determined that kid would be me.

So, where does this competition come from? Why can’t all the edgy brown kids just get along? Perhaps it is due to the fact that South Asian-Americans—and, more broadly speaking, Asian-Americans—are conveniently forgotten in mainstream conversations on race, ethnicity and diversity. In these binary black-white discourses, the complex position of Asian Americans is glossed over.

For those of us first and second-generation South Asian-Americans balancing between our desi and assimilated culture usually results in conversations about identity, and most times we do not have these talks within  our own families or immigrant communities.

In my own case, I am frequently the only non-Black person of color in anti-racist organizing spaces. At times, it is an isolating experience. On the subject of privilege, I am likened to the white allies. Yet, during conversations on oppression, I find solidarity with the Black activists in the room. But mostly, I prided myself for being able to have these unique experiences. In learning how to navigate privilege and oppression, I built a collective of one in order to survive.

When faced with a desi person who may share my perspective on resistance, identity and oppression, this individuality is threatened. Instead, I find myself competing with those I share the most similarities with, rather than admit that perhaps my struggle would have been easier if I had not held onto my individual oppression so closely. It has taken years for me to realize I am not the first disgruntled, frustrated, or eccentric brown kid nor will I be the last.

Needless to say, I never won a game of Battle of the Edgy Brown Kids. In an effort to distinguish myself from my small-town community, I missed key opportunities to build meaningful relationships within it.

The truth is no one wins when desis are pitted against each other, even in our imaginations.