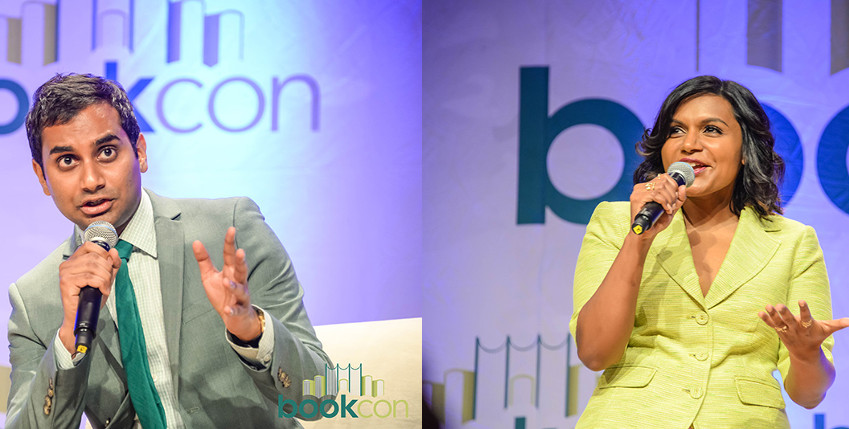 With their cult-like following and celebrated TV shows like “The Office,” “The Mindy Project” and “Parks and Recreation,” Mindy Kaling and Aziz Ansari have become two of the biggest names in comedy.

The year of 2015 marks an addition to their list of achievements—the release of Ansari’s new book and Kaling’s highly anticipated sophomore novel.

While we wait until September for Kaling’s “Why Not Me?” (after her wildly successful “Is Everyone Hanging Out Without Me?”), Ansari’s “Modern Romance” represents his first foray into the literary world. Both Kaling and Ansari were present at the 2015 BookCon, an annual book convention, in May at the Javits Center in New York City.

On May 30, a crowd of 2,000 boisterous fans battled to get into the Special Events Hall to see Kaling. Teenage girls and young women broke the security barriers to secure the best seats available. Everyone was in for a special treat as Kaling’s best friend, her former beau, and “The Office” co-star and co-writer, BJ Novak interviewed her. Kaling offered exclusive information on “Why Not Me?” which is slated for release in early September.

She shared that the title had an underlying meaning to it. It explains how she is not experiencing marriage and children at this age, unlike many of her friends. The title simultaneously describes her emergence in show business, as she believes, why shouldn’t she, a female minority, have a shot at success, as well?

Kaling also addressed the cancellation of “The Mindy Project” on FOX and its move to Hulu. She described having her own television show as being in a “rocky relationship,” with uncertainty if it would last each year. With the privilege of creating a mainstream television show, Kaling said she did not expect this type of a struggle.

Beyond her personal projects, Kaling had many other insightful observations to offer when questioned by Novak and the audience. At the end of her first book, “Is Everyone Hanging Out Without Me?” Kaling listed her goals for the next five years and where she hoped to be when writing her second novel (which was to be married with children and a Hollywood movie star).

Kaling reflected on those aspirations at BookCon saying, “F*ck you, 2010 self!”

She lamented on how being such a motivated person and creating those kinds of expectations prevented her from enjoying the success she has experienced in the past five years, which she is (rightfully) proud of, despite not meeting those other goals. Thus, she said her only goal for the next five years is to make just one, really good, new friend, a task that she described as quite difficult in adulthood.

Finally, Kaling talked about trying to find the balance between exercising her creative freedom while trying to incorporate her Indian identity into her work. She defended her choices by stating that a white male artist, like James Franco, never has to explain his choices, whereas she does. Kaling said she wants to infuse her heritage more and wants to write about growing up in Cambridge, Massachusetts.

Fans left the interview in awe of her style and comments and were gifted free excerpts from “Why Not Me?”

Later that afternoon, in the very same Special Events Hall, Aziz Ansari talked about “Modern Romance,” released on June 16, 2015, which he co-wrote with NYU sociologist Eric Klinenberg. “Modern Romance” took the pair over a year-and-a-half of research as they conducted surveys and focus groups in major U.S. cities as well as abroad.

Ansari hilariously described his inspiration for the book, a hook-up with a girl whom he refers to as “Tanya.” He said he had a great time with “Tanya” and thought “Tanya” did, too. But much to his dismay and confusion, “Tanya” never responded to any of Ansari’s texts throughout the next couple of weeks. A situation all too familiar to many of us, which prompted Aziz to want to write a book exploring how technology, including texting and dating apps, affects courtship, dating, and relationships.

A situation all too familiar to many of us, which prompted Ansari to write a book exploring how technology, including texting and dating apps, effects courtship, dating and relationships.

In the book, Ansari and Klinenberg talked about the historical changes in meeting people versus new technology, in which the latter provides no binding geographical boundaries and gives people limitless options. One of Ansari’s poignant observations was that, in the past, people wanted a partner to be someone to settle down and start a family with, but now, a partner must be a best friend, confidante, therapist, someone you really want to spend all your time with, and more.

One of Ansari’s poignant observations in the book was, in the past, people wanted a partner to settle down and start a family with, but now, a partner must be a best friend, confidante, therapist, someone you really want to spend all your time with, and more.

During the conversation with The New York Times’ “Modern Love” column editor Daniel Jones, Ansari mentioned his parents’ arranged marriage in India. He credited the success of their marriage to the idea that in an arranged marriage, love slowly comes to a boil, whereas often otherwise, love begins heated and passionately, but does not last as long. Ansari’s interview was filled with numerous comic anecdotes that he came across during his research, including issues of how many “y”s to add when texting, “Hey” and stories of OkCupid etiquette faux pas.

However, the most controversial part of Ansari’s interview was when he stated that everyone finds themselves in these kinds of situations but rarely speak about it…to which I say, Ansari, would you like to see the various group chats on my phone in which my girlfriends and I screenshot text messaging encounters with boys? Or, have you not read Brown Girl’s very own “Shaadi In The City” column? Perhaps, Ansari only found this bit to be true of men.

Both Kaling and Ansari delighted fans at BookCon with their humor and remarks. It is worth noting that on Saturday at the Javits Center, there were four main speakers in the Special Events Hall, and two out of these four were Indian-Americans. Seeing Indian-Americans have such a prominent role at such a large scale event is remarkable.

As mainstays of American media, Kaling and Ansari’s presence and cultural influence have great implications for the presence of South Asians in the U.S.

Saumya Bhutani is a recent graduate of Vassar College where she majored in History and minored in Biology. She wrote her thesis on the relationship between beauty ideals and the changing roles of women in India in the late 1970s. Saumya is an aspiring physician but also considers herself a history aficionado and pop culture junkie.