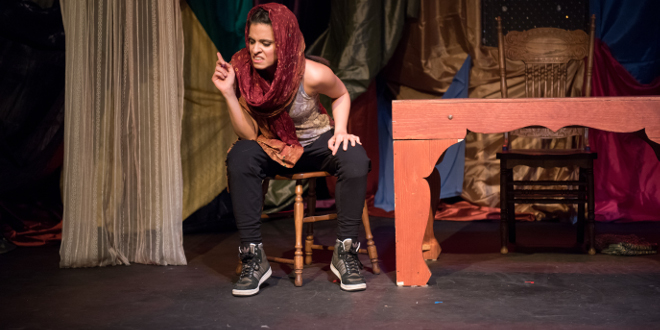 Win tickets to see Nadia Manzoor’s one-woman show “Burq Off” in New York City on Sun., Jan. 18 at 2 PM at Teatro Circulo. Please enter to win only if you know you can attend the show:

As a young girl gazes out her window, dreaming to one day become an astronaut and hoping to leave her home, she finds herself at a crossroads between her family’s conservative ways and her society’s liberal attitude. But because she comes from a family who deems her dreams as unsuitable in favor of her predetermined future as a housewife, she can only continue to dream big until she leaves.

Nadia Manzoor, that once five-year-old daydreamer is now the writer and headliner of her acclaimed one-woman show, “Burq Off,” playing in New York City through January 18 at Teatro Circulo.

Manzoor’s stage consists of one table, three chairs and colorful drapes of Middle Eastern women’s cloth, which she uses as props. The simplicity of the stage brings you from a middle class Pakistani home in England to Mecca, Saudi Arabia.

She takes the audience for a ride into her British-Pakistani life, while gracefully tackling 21 different roles and combating the conservative views of her domineering father, Abbu, her passive-agreeing mother, Ammi, and her harsher twin brother, Khurram, who wants to stay within stricter confines of their culture. 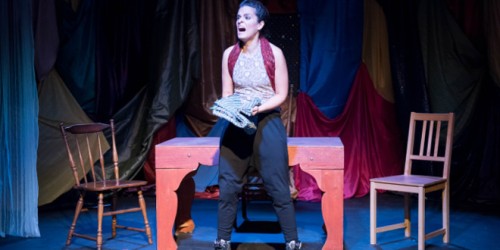 The play, directed by Tara Elliot, explores Manzoor’s life, uncovering self-conflicting issues of wanting to live like the English, but finding difficulty when her parents are ultimately determined to slap all English-like qualities out of her.

Her parents’ strict no-dating or no-touching policy is not the norm among Manzoor’s friends and the culture she grew up around in North London.

Through Manzoor’s 21 tangible and complex characters, we are able to navigate the cultural conflicts she’s faced with since childhood.

While creatively splitting the show with short dance pieces, we see her going through realizations of different kinds, one that leads her to believe that her freedom lies in modesty and in leaving her home.

And while her dance skills are a fusion of Bollywood and American styles, particularly hip-hop, she retains the audience’s attention well. With full commitment to express gawky faces and nail each character’s personality, she brings delightful humor to the show.

While we learn about many of Manzoor’s unique experiences and relationships, one that stands out the most is the bond between mother and daughter.

One example of a mother-daughter interaction is when Manzoor tries to explain to her mother that she only went to the movies on her first date. Ammi’s conservative response, “Beta, now you will become pregnant,” is one that has the audience laughing.

The play takes a serious turn when Manzsoor needs to accept her mother’s cancer and mourn her death. Without giving too much away, though that moment is tragic, it is then that Manzoor learns more about herself and how to love herself for who she is.

“There are moments when I’m really able to be in it and mourn about my mum,” Manzoor said about the few scenes she is seen grieving her on her mother’s death bed. “And that can be really difficult to be in front of an audience and do it again and again. But I’ve really just gotten to a point where I love doing the show so much that it’s not that hard.” 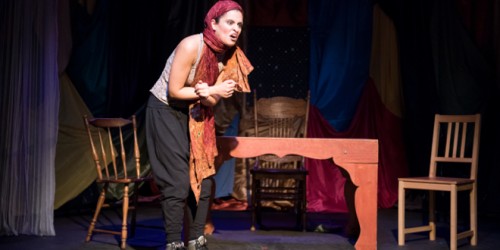 But the main question throughout this well-paced play remains: What is freedom to a Pakistani woman? Or to a person who struggles to juggle one’s family culture and a culture outside of their own?

Is it the way she kindly obliges to her parents request to become a modest woman and live vicariously through English friends or is freedom the outcome of owning the truth even if it means breaking family bonds?

As Manzoor learns how to navigate between her orthodox family life and liberal Western attitudes, she is careful not to portray herself as a victim, but an empowered woman who finds liberation by many instances in her life.

An example of that is when she finally feels at one with her burqa on her family trip to Mecca. It is there she discovers “the freedom of a burqa.” On the other hand, it is also intriguing to see Manzoor feel the same kind of liberation when she borrows her English friend’s bikini, leaving the audience laughing, and rejoicing over her finding ways to embrace her two cultures.

A must-see show for all ages, “Burq Off’ is especially for those growing up with the dichotomy of two cultures, or for anyone needing a good laugh and feeling empowered. 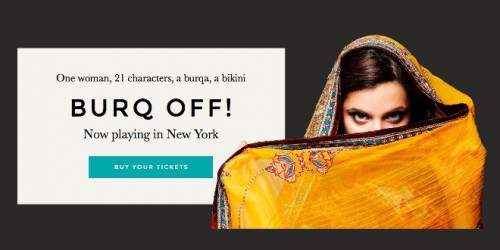