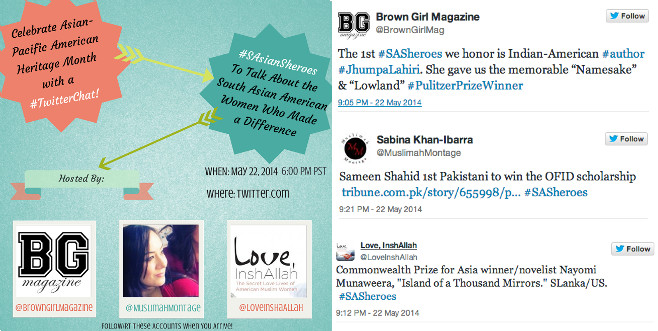 Preconceived notions, misinformed stereotypes, and judgmental attitudes can often create the worst possible associations with South Asian women. But, this past Thursday, a Twitter chat hosted by Brown Girl Magazine, , Muslimah Montage, and Love, InshAllah, perfectly highlighted the amazing achievements of so many South Asian women around the world.

In celebrating Asian Pacific Heritage Month with this brilliant Twitter discussion, these groups focused on the countless differences made by South Asian women in their own communities and worldwide over the years. The response was overwhelming, and the hashtags #SAsianSHeroes and #SASHeroes were used to capture heroism in South Asian women from all walks of life.

From the first Indian woman to earn a degree in Western medicine, Dr. Anandi Gopal Joshi; to Oscar-winning Pakistani documentarian, Sharmeen Obaid Chinoy; to the third prime Minister of India, Indira Gandhi; to Bollywood sensation, Madhuri Dixit; to American singer-songwriter, Norah Jones; and even to the heroes found closer to our homes in our mothers and sisters – this Twitter party celebrated South Asian women the way they should be celebrated every single day. And why do these conversations even matter? Because by acknowledging and discussing these amazing past and present heroes, we’re shaping the future generations of South Asian women across the world.

Curious to read more about the many South Asian women whom you need to know about?  Check out some of the highlights below.

The 1st #SASheroes we honor is Indian-American #author #JhumpaLahiri. She gave us the memorable “Namesake” & “Lowland” #PulitzerPrizeWinner

@MIAuniverse is a #SASheroes speaking her mind freely and commenting on the politics of the world creative, through music and visual art. — Kamini R (@KaminiRamdeen) May 23, 2014

The 1st woman to hold office in #India was the courageous #IndiraGhandi. She was the 3rd #PM & was assassinated in 1984 #SASheroes — Brown Girl Magazine (@BrownGirlMag) May 23, 2014

Excited to be taking part in the #SASheroes convo tonight for @AsAmNews – who’s a South Asian woman we should know about?! — Farah Naz Khan (@farah287) May 23, 2014

The first Indian woman to become a doctor in the US was Dr. Anandabai Joshee in 1886! A trailblazer if there ever was one #SASheroes — Foram Mehta (@IamFoprah) May 23, 2014

One of my biggest inspiration (who also happens to be younger than me) and my #SASheroes #RadicalMuslim partner in crime @ZahraBilloo. <3 — Taz Ahmed (@TazzyStar) May 23, 2014

Then take a trip over to Twitter and read the trending tweets associated with the hashtag mentioned above.

Farah Naz Khan is an internal medicine resident at Emory University. After graduating from college in Boston, she returned to her Alabama hometown to attend medical school, and was reunited with the mix of Southern hospitality and South Asian culture that had shaped her childhood. Follow her on Twitter @farah287 or read some of her thoughts at farah287.blogspot.com.