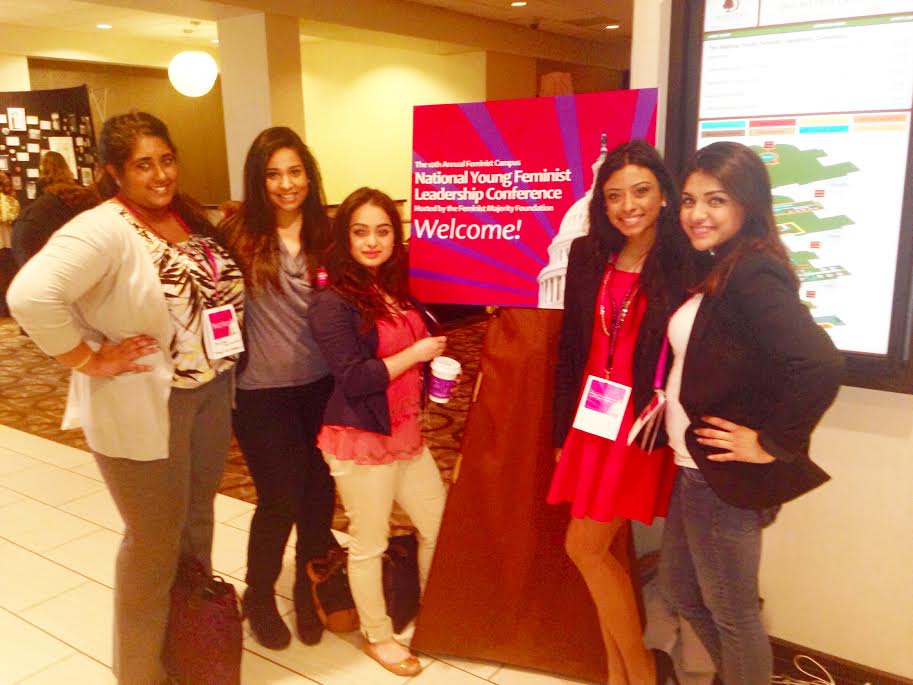 If you are wondering, what is a feminism…well, according to the Feminist Majority Foundation:

feminism is a global movement dedicated to equality and seeks to eliminate discrimination of all kinds – sex, race, sexual orientation, age, religion, national origin, disability, and marital status. And, like feminists since the late 19th Century, we advocate non-violence and work to eliminate social and economic injustice.”

In addition to attending  many workshops and enjoying the nations’s capital, we had a great time hanging out with our fellow feminist friends, Maureen Shaw and Lindsay Menard-Freeman from SheRights!

Below, BG Sheena and Sindhuri wrote about their personal experiences from the conference:

Skill Building: Getting Off the Ground: Launching and Relaunching

My interest in entrepreneurship drew me to the “Launching and Relaunching” workshop at the National Young Feminist Leadership Conference. The workshop was geared towards student leaders in a discussion panel about starting a student organization for the first time and “relaunching” it after summer vacation. There was a clear overlap in the skills I learned while running student organizations during my undergrad years with the skills that I am using to start and run my nutrition consulting company.

The panel consisted of a National Campus organizer, Edwith Theogene, a faculty advisor from Frederick Community College, Dr. Jill Schultz and three student leaders, Ellen Garland from Austin Peay State University in Tennessee, Katrina Harrison from Temple University in Pennsylvania and Karen Hernandez from California State University in Los Angeles. All of the speakers were very impressive with their leadership experiences at their respective schools.

Building relationships with resources, community and university partners, professors, student organizations, and other small businesses are key to starting any organization or business. This is true now more than ever since I am entering the world of entrepreneurship.

The prevalence of the topics of rape and sexual assault during the general assembly was prevailing. It was shocking to hear the numbers of women who have experienced rape or sexual assault in their lives. Yet, it made me realize how desensitized women in our society are in regards to disrespect for a woman’s sexuality. Rape and sexual assault are so common, but so uncommonly discussed. Can you think of someone close to you who has been a victim of sexual assault? Many of us can.

Living in New York City, sexual harassment towards women becomes a part of a daily routine that most women ignore. Is this behavior women should be made to tolerate?

The older I become, the more I realize that women and men should be taught at a younger age to respect all genders, their body parts and the bodies of others. Starting with education from a young age, children will grow up not only comfortable with their bodies and sexuality, but they will learn to have respect for other people.

I work at a clinic in the Bronx as my day job, and I have heard many of our outreach educators speak about five-year-old students asking them about “sex.” If children are exposed to knowledge about sex, should we not as responsible adults, older siblings, leaders and parents also teach our children about sex in a respectful way, before they are introduced to it in another way… a way that could foster vulnerability and disrespect? Or even worse, sexual assault or rape?

Interesting Vocabulary from the Conference:

Diaspora – A group of people who live outside the area in which they had lived for a long time or where their ancestors lived.

Binary – The classification of sex and gender as two distinct, opposite and disconnected forms of masculine and feminine.

Rape is Rape: The Fight Against Campus Sexual Assault

According to a recent survey, “one in five women will experience rape or an attempted rape at some point during her years in college.” Sexual assault is a common occurrence on college campuses, whether colleges present the facts or not. For most incoming freshmen, hormones are raging and sometimes one bad decision made under the influence can lead to a serious case of sexual assault, which many colleges want to turn their heads from.

However, the workshop concentrated on the many ways students and activists are working to make these cases more prevalent and are demanding justice.  Some well-known colleges and universities are known to throw these cases under the table, not giving the perpetrators a punishment that fits the crime, which gives many a reason to believe it’s not a “crime.”

Laura Dunn, co-founder of SurvJustice, was one of the moderator’s, along with Sade Adeeyo, one of the members on the board of directors for the Black Women’s Blueprint. They began the workshop by sharing their personal experiences as sexual assault victims and how this affected their lives. The women spoke about the Cleary Act, which requires all colleges and universities that take part in federal financial aid programs to keep and disclose information about crime on and near their respective campuses. They also spoke about Title 9, which protects people from discrimination based on sex in education programs, and together these laws help sexual assault victims file their cases.

One important question discussed during the workshop was: “what are student organizations doing to end sexual assault on your campus?” One organization on a college campus made sure there was a link available under “student resources” on the university’s main page, where sexual assault could be reported easily. Every college’s goal should be to help victims of sexual assault, so they don’t have to go on a hunt to find help and resources.

‘I Cover My Hair—and I’m a Feminist’: An Interview with Author Lauren Shields

Ask For What You Want: 5 Qualities of a Sexually Empowered Woman