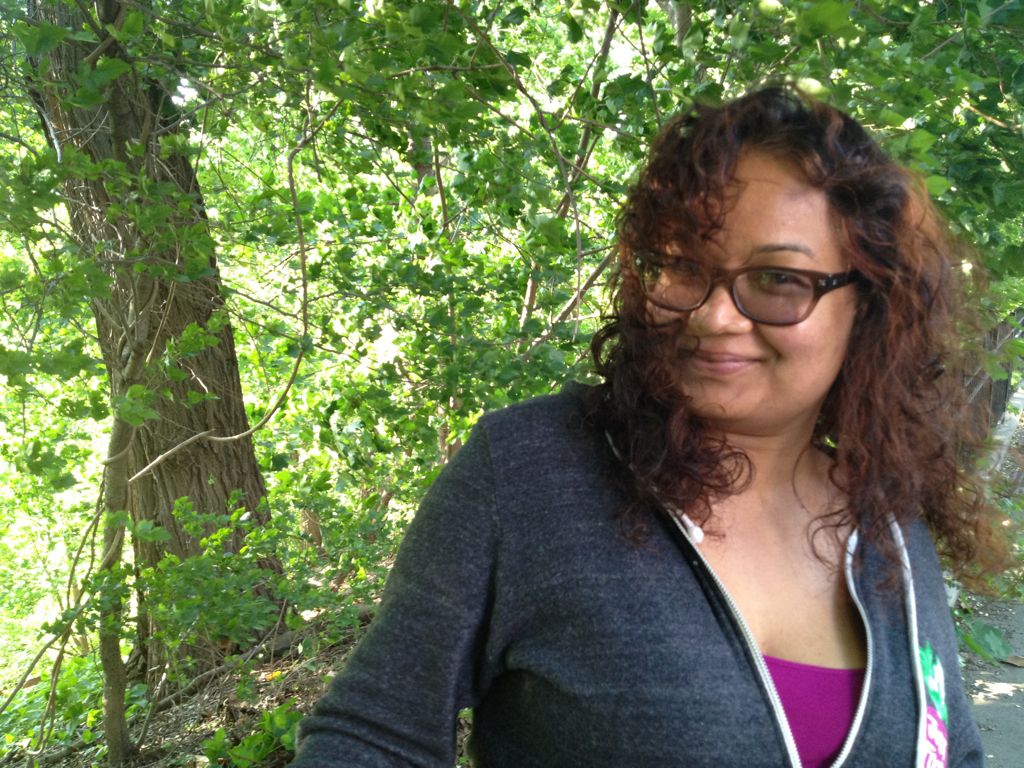 Meet Anandi Premlall, an impressive young woman from Southern Queens! In the middle of hustly-bustly New York City, you can find Anandi’s anti-cancer garden. The 2,000-square-foot of vacant land in Queens will legally become the “Love, Life and Liberty Anti-Cancer Garden.” One of the garden’s purpose is to fill a void and give support to those living with cancer or for someone who lost a loved one to cancer. With Earth Day coming up on April 22, it was the perfect time to speak to an amazing, change-oriented South Asian woman, about her life, dreams and environment-friendly projects.

Anandi, a native of Georgetown, Guyana, grew up in NYC. While growing up in household with parents and three brothers, she said she’s always had a strong connection to her Indo-Carribean culture and South Asian ancestry.

A graduate of Hunter College in Manhattan with a degree in writing, Anandi said she is continuing her studies at Farm School in NY, where she is pursuing a degree in Urban Agriculture. She is an Urban Farm Apprentice at Earth Matter on Governor’s Island, NY.

An awesome fact is that the island was a former military base and now it’s a farm and park space for the public,” Anandi said.

She was also recently hired as a Farmers Market Manager with Down to Earth Markets at the Queens Botanical Gardens in Queens, NY. Best of all, Anandi will be featured as one of the five visionaries in Queens for the April edition of Edible Queens Magazine.

When asked what the anti-cancer garden is, Anandi said, “SustyQ (Sustainable Queens) is my passion.”

Wow! What was your inspiration for this garden?

I was inspired by artist Beatriz Da Costa, who had created the most amazing anti-cancer toolkit. It was part of the Art Environment Action! Exhibit, which was curated by an amazing South Asian woman, Radhika Subramaniam. When I looked at her exhibit, it was the most heartbreaking and fascinating project, because she was suffering from cancer.

When I  tried to contact her to help with our project, I found out she had already died. I wanted to create this space that was open physically, spiritually, and emotionally for the community. It is a place where you could meditate. My friend’s mom died from breast cancer so that was also an inspiration.

I started putting plans together for the project last November. We’re starting right from the beginning. I’m getting access to vacant land in the community and making it physically accessible to people. It’s one block off of Liberty Avenue, which is a popular shopping area in Richmond Hill, Queens.

What plans do you have for the garden?

We’re planning to have 50 different plants including flowers, herbs and trees that have cancer-fighting properties.We have delicious recipes that will be available at workshops on site. It will help build community around something that’s usually seen as a sad, depressing. Instead people will say, ‘Okay, this isn’t the end of the world, we can heal together.’

That’s truly incredible! What kind of challenges or support have you seen while making this garden a reality?

Well, it’s bringing issues from my culture and background up, since it’s a link to our recent history of agriculture and slavery. It really is confronting a lot of things people don’t want to talk about. But I’m actually getting a lot of support from people. They are saying, ‘Wow, how can I help?’ and I’m like ‘Wow, okay let’s do this!’

This space connects to people so emotionally and I find that so encouraging. Part of the work I’ve been doing is ‘guerrilla gardening,’ which is beautifying things without asking permission from the City. But now, we’re close to our goal of acquiring this land and getting the support to make it happen.  The City usually cleans these empty lots and puts up gates to keep people out, but I rather make something awesome out of this.”

Tell us more about your cohorts.

I have a mix of family members, including my mom [aka seed bomb Seeta] and dad [aka compost comPadre], who are so supportive and amazing, two young female cousins, friends who are running their own gardens. I also have friends and teachers whom I’ve connected with from way back in high school. It’s a really great mix.

Who is your greatest supporter?

That’s tough! I’ve been speaking with friends lately and realizing I have so much support. I’d think they’d have to battle it out, like have a clay-mation death match or something. This is gonna sound cheesy: my parents. They may not say it all the time, but they are always there and always, always, always supporting me in whatever I need. My mom really enjoys it because she get to live vicariously through her only daughter in many ways. She loves the arts and gardening from when she was living Guyana, so it helps her get back in touch with her roots.

Is there anything you’d like to say beyond this? Dreams, advice, statements?

One of the other dream projects I’m working on is the QueensWay or affectionately known as the Queens High Line.  The purpose of this project is to transform three-and-a-half miles of unused track of the Long Island Rail Road’s Rockaway Beach branch into a High Line-style park. It might fail, but at least I can say I tried.

Never underestimate the power of doing one little thing. Even when people tell me I am not going to make any money out of this, but I say it’s not about the money. What you get from following your dreams, you can’t ever buy. You can’t put a price tag on it. And I wish I would have had more self-esteem when I was younger. And now I know it doesn’t matter what people say. I feel like this is what I was born to do, this is why I’m here. I’m re-creating the Caribbean, my backyard of the Amazon, the business of India in my third-world-country-turned-city-girl kinda way. I want to travel internationally to nurture and bring people together with nature and food.

All pictures are provided by Anandi Premlall.

Exploring the Dichotomy of Generational Privilege and ‘Finding Ourselves’

‘You Speak Hindi, Right?’: How College Taught Me to Embrace My Unique Cultural Identity