Bollywood has been struck with a tragic blow this past week with the suicide of talented actress Jiah Khan. The actress was found hanging from the ceiling in her home by her mother last Monday night. She was 25 years old.

Jiah Khan broke through into the Indian film industry with the “Lolita”-inspired “Nishabd” directed by Ram Gopal Varma, but she is most recognizable for her role opposite Aamir Khan in “Ghajini.” When news of her self-inflicted demise broke, Bollywood exploded with comments via social media outlets.

While many celebrities like Amitabh Bachchan, Ram Gopal Varma and Juhi Chawla took to Twitter to express their shock and sadness: 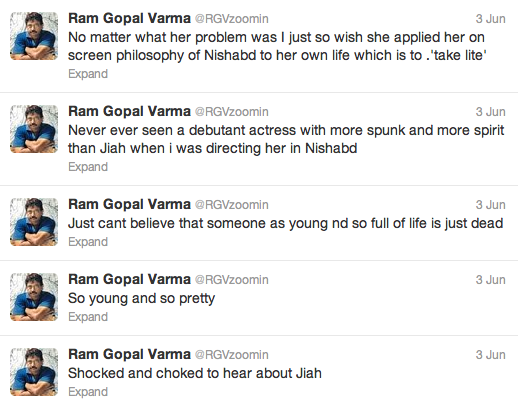 Others like Siddharth used this event as a plea for class from the media and as a reminder to not let anyone else become a cautionary tale: 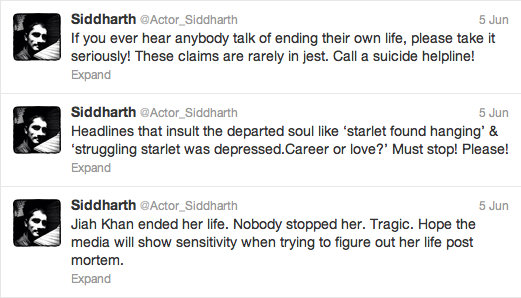 During the initial news surrounding Khan’s death, media outlets in India were desperate to know why an actress with so much potential would want to end her life. Newspapers and websites all over the country reported complete inaccuracies about Khan’s troubles as there was no written motive given by the actress, or possibly because the press could not wait until one was discovered. Tacky headlines like “Jiah Khan: Besotted with Bollywood, heartbroken in love” and “Jiah Khan, Amitabh Bachchan’s ‘Lolita’, who never topped that role” were all over the web.

But all of this soon changed when a six-page note was discovered among Khan’s things. The actress’ mother released the note to the authorities and the press not only in the hopes that incorrect assumptions would no longer be made about her daughter, but also so that the true reason behind her daughter’s demise would be brought to light. That reason? Her boyfriend Suraj Pancholi.

In the letter, Jiah Khan accused an unidentified man of many terrible things, including forcing her to get an abortion and raping and abusing her. As Khan was in a relationship with the Pancholi son at the time of her suicide, her mother took the note to the authorities and accused Suraj as the man in question. We at Brown Girl are not comfortable posting the actual letter on our site, but if you wish to read it in its entirety, here is a link to do so: http://www.indiatimes.com/news/india/jiah-khans-suicide-note-revealed-82440.html

While Suraj Pancholi was not present at the time of Khan’s death, he was still taken into custody under suspicion of abetting the suicide as he had spent the two nights prior with Khan and was the last person she spoke with over the phone. Reportedly, that last conversation resulted in an argument.

This is not the first time a member of the Pancholi family has been under both public and legal scrutiny. Suraj Pancholi’s father, actor Aditya Pancholi, is not only known for his temper- he once slapped a police constable in the 90s- but also for his troubles with women. While dating actress Poorva Bedi, the elder Pancholi was accused of raping Bedi’s maid who was 15 at the time in question. He told the way-too-young-for-him lady that he would help her get a burgeoning film career. Pancholi is also known for his affair with actress Kangana Ranaut, another lady who later claimed that Pancholi has abused her. Recently, the Pancholi matriarch- Zarina Wahab- defended her son against the many allegations brought against him:

“Obviously we didn’t anticipate how important it was for some people to make a villain out of him. We know Suraj. And let me tell you, he is the best son any mother can hope for. If I’ve another life I’d want Suraj as my son,” she stated.

Aditya Pancholi has refused to release a statement and has supposedly gone “into hiding” after his son’s arrest.

Jiah Khan was laid to rest last Wednesday at Juhu Muslim Cemetery. Her funeral attended by many of her peers including Aamir Khan, Ritesh Deshmukh and more.