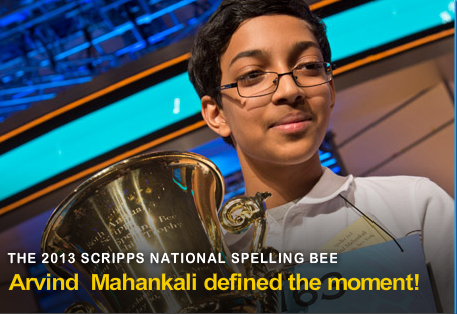 On Thursday, May 30, 13 year old Arvind Mahankali of Nathaniel Hawthorne MS 74 in New York City, won the 2013 Scripps National Spelling Bee. The first male to win the prestigious competition since 2008, determined Arvind successfully beat out his 280 competitors with the final word, “knaidel”. Ironically, Arvind had placed third in the bee the last two years, having been eliminated both times on similar German words.

Following his win, and collection of both a shiny, new trophy, and more than $30, 000 in prizes, I had the opportunity to speak with Arvind for a short Brown Girl Magazine exclusive interview.

A Bayside, New York eight-grader, Arvind comes from a family of two proud and supporting parents and a younger brother. Unlike any eighth-grader I know, Arvind gets up in the morning, studies spelling, goes to school, does his homework, and ends his day studying more words. When asked how he memorizes words, Arvind replied:

First, I browse the dictionary, then I have my parents quiz me, and finally, over time, the word becomes engraved in my mind.

Arvind also revealed that he began participating in competitive spelling bees beginning in the second grade. Winning that first school competition inspired him to pursue the skill even further, and eventually led him to enter into his first Scripps National Spelling Bee at the age of 11. Compared to this year’s competition, Arvind recalls that in his first spelling bee experience where he placed ninth was highly unpredictable. He even admits that he “had not studied a lot” and was definitely the most nervous he’s ever been. When it came time to actively study for this year’s bee, Arvind told me that, no longer nervous, he’s gotten used to the routine of browsing words, being quizzed by his father, and making sure to pay special attention to German words – the eliminating factor for him in the last two bees. That focus is exactly what aided him in winning this competition: the winning word was “knaidel”, a German-derived word roughly meaning a small, dough, Jewish dumpling.

As for the prize money, the prodigious 13-year old plans on saving it for college, where he dreams of pursuing a career in physics. When asked on his plans now that this year’s competition is over, Arvind happily replied that he will be retiring from spelling bees and using his free time to study physics and math as he prepares for his high school endeavors in the coming years.

On this final note, I’ll leave you with some tips for anyone wishing to compete in a spelling bee in the near future – straight from 2013 champion Arvind himself…

Try your best, and above all, DO NOT be afraid of the size of the dictionary.

From Chants to Championships: Should There be a Competitive Yoga League?

‘Mogambo’: Riz Ahmed’s New Single is an Anthem for the Unwanted

‘Butter Chicken Podcast’ is Desi Music, Features, and Entertainment in One Tasty Listen

A ‘Rewind’ with Raxstar: An Inside Look at the Urban Desi Artist’s Past, Present, and Future