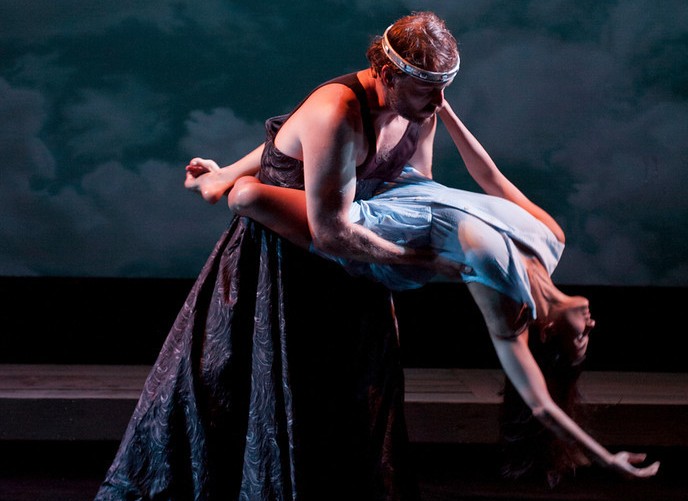 Meet our Brown Girl of the Month of February 2013!

In her almost two decades as a professional actress, Anjali Bhimani has done it all: she has performed in plays, musicals, opera, dance, television, and film, as well as directing, producing, and writing original scripts. Brown Girl Magazine caught up with her as she started in on her final weeks in Chicago reprising her original role  at the Lookingglass Theatre Company’s remount of the Tony-winning play, Metamorphoses, on the 10th anniversary of the Broadway production. Anjali will be appearing in NBC’s upcoming show Save Me and a webseries called Second Shot that will be premiering at the Dinah Film Festival in April.

“I’m not really sure what specifically made me choose acting as a career, other than realizing somewhere around high school that this thing I loved to do, performing, was something I could actually do for a living! I was always encouraged by my parents to pursue whatever career I wanted, and when they saw that I was serious and willing to work hard at being an actress, they supported me tremendously and encouraged me to continue with it while also reminding me to be realistic about earning a living in the arts. As a result, I did my best to learn about EVERYTHING I could regarding theatre so that I was prepared to work in whatever capacity I could. Luckily for me, I got my first professional job pretty much right out of school. It’s not something I ever take for granted though.

I can’t really say any one person or thing was my inspiration. Both of my parents inspired me to work hard and follow my dreams. My brother was a tremendous inspiration to me to be an individual and capitalize on my unique talents. But since I see my path as unique, just as everyone else’s is, I suppose my inspiration has come from many different people whose careers and lives have aspects of the career and life I want to have. I love pulling from other people’s stories and saying “Oh, yes…that sounds good…let me figure out how to make THAT happen…” I think for any person pursuing the arts as a career, the greatest difficulty is learning how to process rejection. And I do mean PROCESS it, not “handle” it. I’ve never been good at blowing off any kind of input, good or bad, and learning how to take each rejection and make it a part of what goes into the recipe for goodness in my life is an ongoing process. Surprisingly, it actually hasn’t been an obstacle being of South Asian descent, but I think that’s mostly because I always treated it as just another thing that made me unique rather than a defining characteristic. You know, rather than thinking of myself as solely an Indian actress, I think of that the same way I think of being petite or having long hair…just another feature that contributes to what I have to offer. I’ve also been blessed with being able to play so many different ethnicities that I never felt pigeon-holed, even though I play a lot of doctors. I think that has more to do with me handling medical jargon and action really well, thanks to my doctor parents, and my own interest in the healing professions than it does in my being Indian.

To those girls who are looking to get into this career, don’t follow in MY footsteps or anyone else’s, for that matter–make your own! Everything about you, whether you perceive it as an asset or a flaw, goes into making up the unique package that is you. No one else in the world has that combination of traits, so you are uniquely built to do things in a way no one else can. How empowering is that? Especially for young women, I think that’s important to remember. So many of us have wasted so much time (I know I did) just trying to be someone that we’re not, pointing out to ourselves all our perceived failings and things that we lack. I guarantee the more you embrace and celebrate your uniqueness, the more people will see the unique beauty you have. And just because you are an actress or an artist of any kind, don’t think that you have to solely focus on artistic endeavors…some of my most life-enhancing experiences had nothing to do with acting, but they have formed who I am as a person, and all of that goes into what you bring into a room when you audition or perform. Be brave enough to be yourself and take that person out into the world with joy, gratitude, and loads of excitement for what’s to come.”