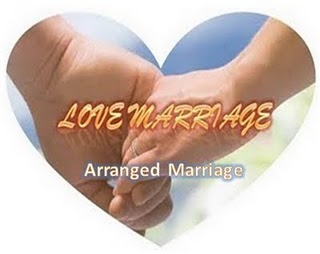 Marriage, a holy matrimony between two souls uniting in harmonious commitment for life, is a sacred occasion every girl dreams of. The preparation of finding your dream bridal dress, the perfect location for walking down the aisle and the strenuous decision involving the right flowers matching the bridal theme, are scenarios every girl fantasizes. A dream so pure and beautiful in thoughts, yet sometimes, is harshly unattainable in existence. Human nature has evolved drastically with the rapid growing technology of today, and marriage has been given a whole different meaning with an emphasis on independent freedom and extravagant desires.

How beautiful it is to find someone special, fall in love, get married and start a family when  the pair vows to be committed to each other for better or for worse, for richer, for poorer, in sickness and in health, to love and to cherish; from  “this” day forward until death do us part. Are love marriages as genuine like the vows that are recited and solemnly promised to one and other in the presence of God and His witnesses or have our promises taken a turn of deceit, materialistic gain and self indulgence? In other words, are we kidding ourselves of ‘love’ or is love yet to happen?

Love marriages in Eastern society are slowly adapting more leniency as a direct influence from Western media & culture as a justified portrayal of self-sought romance. Love marriage is usually defined as a very liberal act of personal decision making, whereas arranged marriages in the West are confronted in a demeaning, forceable way for not pursuing your own life partner.  In the West, people look down upon arranged marriages and question its motive with a surprised look as they can’t imagine spending a whole life with someone who is “arranged” by parents. How would that become a successful marriage? Shouldn’t ‘love’ be the base of all relationships, especially when uniting in holy matrimony for an entire lifetime?

The perception of marriage without initially falling in love is strictly looked upon as an emotionless bond. This is however an untrue assumption for the educated households strongly believing and practicing in traditional matchmaking over a string of dating consequences where culturally, dating is neither prevalent nor encouraged. Values of such sort are created in the environment of a community that holds dear to moral ethics and contradicts the exposure of women in a materialistic society where looks are given precedence over intelligent capacities.

The question remains to be taken under the loop and studied in various different angles; is love marriage to be perceived more seriously than arranged marriages, or would you rather say an arranged marriage is ought to be safer, since played on common grounds?

As Westerners, we may be appalled by the practices of arranged marriages, but little do we realize its origin in Western culture, such in the times of Victorian England. Going back into history; during the Victorian Era (1837-1901), ‘romantic love’ was viewed as the primary requirement for marriage and courting became even more formal.  An interested gentleman could not simply walk up to a young lady and begin a conversation. Even after being introduced, it was still some time before it was considered appropriate for a man to speak to a lady or for a couple to be seen together.

The wait for a marriage proposal within a long-term relationship is often a stressful period for the woman to inhale without the guarantee of an actual commitment for the investment that was put in from the very core of the female heart and soul. A protected wall of secure and sound decisions in the form of parents may be well served to such tragedies happening nowadays. With the growing trend of youngsters trying to find their own life partners, it is worrisome for many parents to give up on their power of knowledge and wistful life’s experiences. Parents have taken a backseat. They may or may not enjoy the ride, but when happiness is at stake, conforming to their children’s ideals is usually the best thing to do. However, parents who are liberal in thoughts and practical in approach, steer their kids to the right people and let them decide what’s best for them; preserving their enthusiastic mindset whilst challenging the right from wrong.

The individual concept of marriage should be revised and taken into positive consideration by young men and women, whether the conduct of marriage is arranged or love -nevertheless, statistics may speak their own language, cultures may enforce their ideology, at the end – it’s the two people involved who make it all happen through thick and thin, for better or for worse. Fate that is based on arranged marriage may come in with baggage of maturity and an ‘in-detail background-check’ paired with family commonalities. Likewise, it may not uphold the kind of fate that was woven in the heat of passion and attraction towards each other.

Similarly, fate itself can easily turn its back on both, walk away and never glance over its shoulder to check on who eventually triumphed – Love or Arranged?