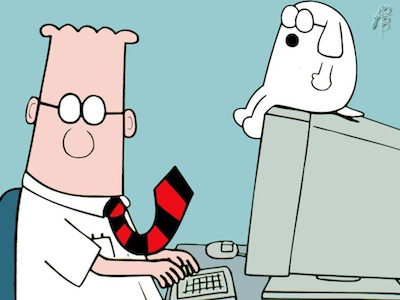 This letter is in rebuttal to Scott Adam’s (creator of Dilbert) blog post titled “Pegs and Holes“.

I have been sitting at my computer screen staring at the blank page in front of me for several days.  No matter how many times I read your post titled “Pegs and Holes” I cannot seem to shake it.  That was not a compliment.  I have more than several issues with your musings so let’s get right down to it.

Blame and shame are not society’s tools for keeping peace and order. Blame is when responsibility for a fault or error is being placed on someone; one does not blame simply to keep people, specifically men, in line.  Shame is a human emotion; an emotion that comes from within a person when they realize they’ve done something wrong. Shame is not a societal weapon used to ‘castrate’ men and keep them on leashes.

I’m slightly confused as to which version of reality you reside in as throughout history it is a known fact that actions such as cheating, sleeping around, etc. are not only acceptable for men, they are encouraged.  Lets go back in history for a minute.  In 17th century England, it was customary for married men to get their carnal pleasures outside of the marital chamber.  Even kings were known to engage in adultery casually and frequently. It was understood because ‘men have needs’.  Every woman was fair game, and every woman conquered resulted in a hearty pat on the back and a mug full of ale to celebrate one’s manhood.  Those same women who partook in the debauchery were instantly considered ‘dirty’.  They were no longer ‘pure’ or ‘virtuous’ and any hopes of a good marriage could be considered as good as gone. Even better, if a queen acquired a lover, she and her lover could be subject to punishment; he by death, and she by a nunnery.  Why?  Let’s fast  forward to the present day. In today’s culture a man who get’s a lot of women is known as a ‘player’.  Most guys aspire to reach that ‘player status’ so they too can be part of the elite group.  If a woman does the EXACT same thing, there are words to describe her that are too vulgar for me to type.  Christina Aguilera’s song “Can’t Hold us Down” comes to mind:

The guy gets all the glory, the more he can score

I don’t understand why its OK,

History has shown us that it has been a ‘man’s world’; women were treated as property with no voice and no rights.  The mentality was for women to be seen and not be heard.  Now, we see a shift in societal views where men’s previously acceptable behavior is finally creating a stir and causing scrutiny among not just women, but also men.  The cat is finally out of the bag, and clearly you, Mister Adams, are not okay with it.  Yes, there is an alarming trend in the news about powerful men behaving badly. No, it not something new. What is new, is the fact that it is being publicized; these men are being made examples of and rightly so in my opinion.  Why is it okay for these men to abuse their stations of power and their wealth to engage in heinous acts and then get off scot free?  That has nothing to do with round pegs in square holes Mister Adams, it has to do with justice.   One cannot commit a crime such as sexual assault or rape, blame it on the fact that you are a man with ‘urges’, and not accept responsibility for your actions.  Everyone has a moral compass, and it is that moral compass that tells us the difference between right and wrong.

Since when was it every man’s, married or otherwise, desire to ‘tweet his meat to strangers’?  There is no such thing as black and white in relationships.  There is a way for both men and women to be satisfied in their commitment and be happy as well…it’s called compromising.  I’m not sure about your version of the future world, but I don’t think it involves pills that take away manhood.  Personally, I feel that society and the world are moving towards a more balanced state based on equality between men and women.  Does that bother you?

I do understand that there are women out there that do engage in cheating, etc. and do so because they feel like they’re ‘sticking it to the man’ and are doing what they do to be super feminist, BUT that is not the point of feminism.   Those actions are no more right than men doing those things simply because they can.  What you need to understand is that society is NOT to blame for this. We are. Each person has the ability to make decisions; we are our actions.  One cannot blame society for one’s faults or actions.  Men are not round pegs in square holes; we’re whatever shape peg we want to be and there’s always a matching hole for us.

Women Physicians: Dreamers in the Age of Undivided British India