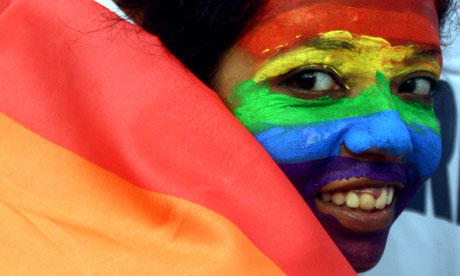 “Indian people are not gay.”

A statement said by a relative in the heat of a continuous and fruitless debate at my house. I stood baffled with my jaw hanging wide open allowing rogue bugs to explore my molars whilst trying to force my brain to understand the sentence that was spoken to me. Belatedly catching on to the actual meaning of the sentence, I tried in vain to wrap my head around that statement.  The most stunning part, however, was not the sentence itself, but the utter conviction with which it was said. Pure contempt and disgust dripped from every single letter in that sentence, boggling my mind and deeply saddening my heart.

We are a people who, through sheer willpower and determination, rid our country of the British and have since then excelled in the world; we have completely dominated in the field of technology, we are continuously discovering new breakthroughs in science; the clothing, music, cuisine, and mystifying beauty of all that is India has the world gaping at our treasures. We have advanced to the point of envy in all aspects except the most important: social.  The crux of the Indian community lies in the societal rules and norms.

Ours is a tight-lipped culture, refusing to acknowledge anything that takes away from the perfect order of garam masala chai’s, stellar academic standards, and arranged marriages. In a society that has trouble accepting love marriages over arranged ones, and would banish a family member without a second glance if they ever dared to get involved in an interracial relationship, homosexuality is the holy grail of taboo in the Indian culture.

I have been blessed to know a woman that is the very embodiment of everything that we promote at Brown Girl Magazine. Ashka Parikh is smart, hip, and one of the most beautiful people I have ever had the privilege of knowing. I was fortunate enough to learn her story, and the results were eye-opening and inspiring. She is Indian, and she is gay, and never have I met someone who was more proud of being both.

When did you first realize you were gay? What thoughts crossed your mind?

I was in elementary school, and I felt attracted to my neighbor who lived across the street when we were riding the bus home. I was scared…I felt it was unnatural to like girls because I would see all my friends having crushes on boys but I didn’t.

Did this knowledge change your behavior at school?

Yeah, it did change because people can be judgmental. I pretended to like boys even though I felt it was wrong, but at the same time I wanted to protect my friendships. I was very uptight because I didn’t my friends to get any ideas that I liked girls. I did however do the stereotypical ‘lesbian things’ like play soccer with the guys and play basketball without ever coming out.

When did you come out to your friends? How did they react?

I was already having a fling with a teammate, who was coincidentally my first kiss, but I met a girl that I really started to like. I began to pursue her, and she became my first girlfriend my junior year of high school.  I told one friend one time, and I lost that friend; it hurt because I thought she was my closest friend at the time.  I started to think that would be how all of my friends would react, so I kept it to myself for a while. Eventually I grew stronger, and I told a few more friends. They didn’t believe me. I powered through, and told the rest, and was met with ‘I already knews’. After a while, I stopped caring what people thought because our community has a tendency to gossip.  I know a lot of Indian lesbians that seek advice on how to come out to their families because of the difficult nature of the topic. Bottom line is that you don’t need people that react negatively when hearing the word ‘gay/lesbian’.

How long did you wait before coming out to your parents? How did they react?

I was 20 years old, and it was my sophomore year at university. I was dating a girl, and one morning my mom came into my room to wake me up for a wedding we had to go to, and she walked in on me and my girlfriend cuddling.  She waited two weeks before approaching me about it, but I was so scared that I broke up with my girlfriend and started dating guys to put them at ease. I was absolutely miserable. I finally decided to stop dating guys, and began to date a girl I really liked because I had finally realized that this was my life. Why should I risk being miserable for the rest of my life, when I could have the love and respect of my parents by just talking to them about it? I made a lot of gay friends at university, and I finally felt comfortable in my own skin because I was surrounded by people who understood.

That’s when my parents knew, even though they were in major denial.  About a year and a half ago, I started to date my current girlfriend, and that’s when my mom sat down with me and apologized for not being supportive and said that they were okay with me being gay.  They just wanted me to be happy. So the actual conversation about me coming out to my parents happened at the age of 24.  I had told my brother when I was 19 years old, he just laughed at me and said, ‘Instead of a jijaji, I’ll have a bhabi.’

I’ve always had a big group of friends, and the worst moments were when I would go out and some of my friends would look at me funny.  They stopped talking to me without saying why; they didn’t even have the courage to tell me why, even though we both knew it was because I’m gay. Dr. Seuss says, ‘Be who you are and say what you want because those who mind don’t matter, and those who matter don’t mind.’  It is something that I live by now because it has proven to be true.  The best moment was when I talked to my mom. Just knowing that she approached me showed a lot of courage and strength on her part.  It showed me why I was raised to be who I am.

Do you feel your relationship with your family and friends has changed? If so, how?

As you grow older, you realize that you have to be a little selfish; I stopped caring about the friends that judged me and hated my choices. I kept the friends who were unconditional in their love for me. My family changed in the sense that we became stronger; we have an honest and open relationship.  If someone tries to say something about me to my parents, they always interject with, ‘We’re proud of our daughter.’ My brother has always been there for me also, and has been a constant stream of support.

Do you feel your sexual orientation affects your ability to be active in both your religion and your culture? Why?

The Bhagvad Gita says two people who love each other can be married—it is non-gender specific. Because women have  been oppressed in Indian society for so long, they are afraid to step up and voice their opinions. Hating on homosexuality is not a cultural or religious battle, it is a social one. Indian society is ruled by a social disease of ‘what will they say?’, and this spills over despite age and location. First generation Indian-Americans are more likely to be against homosexuality, not because of what they were taught, but because they were taught never to question beliefs.  Second eneration Indian-Americans on the other hand, tend to be more tolerant and accepting because they have been exposed to different lifestyles and question their surroundings. I am Indian and I am gay.  Being one does not mean I cannot be the other as well.

What advice would you give other Indians that are struggling with similar challenges of coming out and accepting themselves?

First of all, sit and talk to a sibling and gauge their reaction.  Then sit back and think about how strong you are. Can you face the criticism?  Can you walk by without flinching when people gawk and call you names under their breath?  Then talk to your family.

Finally, become a brick wall because it is your life. It’s about you. Why would you worry about what other people think? If they don’t support you now, they never will. You have to be strong. Trust yourself and be strong.  Believe in yourself and continue on your path. It is better to sacrifice your social calendar than it is to sacrifice your life.

Living in a time and age where acceptance is supposed to be embedded into our very DNA, we still struggle with society’s demands of what is normal and what is not; what is acceptable and what is not. No one is normal, and it is okay to be different.  Most of us feel we need to follow the ‘master plan’ created for us even before conception, but there is no such thing.

Ashka’s struggle proves that it is okay to live outside the minuscule box that is the normal way to be—you shouldn’t feel remorse or guilt for who you love.